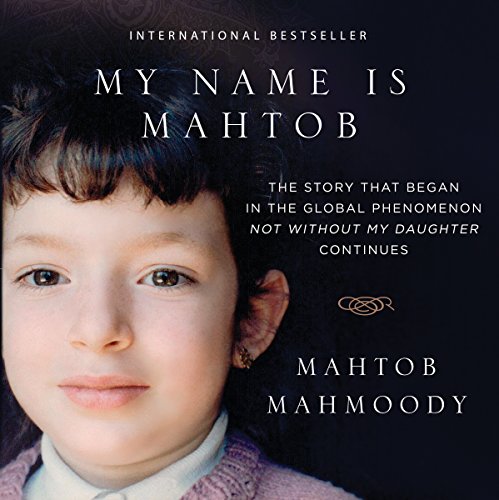 By: Mahtob Mahmoody
Narrated by: Kristin James
Try for £0.00

Two decades ago, millions of listeners worldwide thrilled to the story told in the international best seller Not Without My Daughter - subsequently made into a film starring Sally Field - that told of an American mother and her six-year-old child's daring escape from an abusive and tyrannical Iranian husband and father. Now the daughter returns to tell the whole story - not only of that imprisonment and escape but of life after fleeing Tehran: living in fear of re-abduction, enduring recurring nightmares and panic attacks, attending school under a false name, and battling life-threatening illness - all under the menacing shadow of her father.

This is the story of an extraordinary young woman's triumph over life-crushing trauma to build a life of peace and forgiveness. Taking listeners from Michigan to Iran and from Ankara, Turkey, to Paris, France, My Name Is Mahtob depicts the profound resilience of a wounded soul healed by faith in God's goodness and in his care and love. And Mahmoody reveals the secret of how she liberated herself from a life of fear, learning to forgive the father who had shattered her life and discovering the joy and peace that comes from doing so.

What listeners say about My Name Is Mahtob

Fascinating look into another world!!

If you could sum up My Name Is Mahtob in three words, what would they be?

Mahtob, because of who she is and her faith, she never became bitter even though she was treated so badly by her Dad.

Would you listen to another book narrated by Kristin James?

Not necessarily but a very good listen ALL the same!

When romance goes so wrong

Gut wrenchingly good account of true life. I then watched the brilliant prequel, the film Not without my Daughter. Equally brilliant.

Great another side of the not without your daughte

started out great but halfway through dipped

alot of repetition from halfway on...the incidents of being tormented never manifested into it being the father for sure or an elaborate imagination. struggled to finish it

Looking to hook a new generation of readers?

The beginning of this book, where she talks about escaping Iran with her mother is GREAT. Beautifully written, suspenseful, and heart wrenching. After about 2 hours the original story comes to an end. I wondered, with 7 more hours to fill, what would be the aftermath. A complicated multinational legal wrangling? Attempts by her father to get her back? Stories from her moms charity about other children abducted? No it's none of these. It's 7 hours of her daily life. When you get to the part where she's in college she literally is at the point where she's talking about her favorite foods. She talks about a term paper she's writing. Talks about going to the doctor and then for a recheck and so on. There is one part where it appears her father is trying to contact her, but it's dealt with swiftly and we're back to her daily life about drinking coffee. It seems like through other parts talking about her life she even tries to add some suspense, proposing that a locked door (gasp!) could be the work of her father! It never shakes out that way and it could possibly be that she just turned the knob wrong and couldn't get the door open. Read the original and I'm sure it will be much more fulfilling. I think the mother did a follow up account which might be worth checking into. This is two hours of great followed by 7 hours of nothing.

Where did this narrator get the idea to use a horrible baby voice for the child character? We know the child is a child. We do NOT need a weird, high-pitched version of what the narrator thinks children sound like. Oh my god. It was intolerable. Despite wanting very much to find out what happened to the character, I simply couldn't listen a second longer. I returned this for a refund.
It was horrible. HORRIBLE.

Love the story but not the reader

The reader used different voices and I don't like that with an audio book that's not for children. It's perfectly fine in a child's book though.

Must read for those of us who have read NWOMD!

I struggled with chapter one... not a patient 'reader', but as expected Mahtob picks up the story of her memories by chapter 2 and I was hooked. I read her Mom's 1st book in 1989ish. Mahtob's book has given me closure, as I felt a part of their story from the day I picked up there first book.

Would you listen to My Name Is Mahtob again? Why?

No. I thought the story was good but I didnt especially care for the narrator. I did not like how she changed her voice to fit the characters. I just did not enjoy that aspect. It reminded me of being read to in Kindergarten. Also, I think the story could have been trimmed quite a bit. The story went into too much detail in certain parts which did not appeal to me.

Compelling real life story. I had seen Not Without My Daughter, so I knew the theme of the story.

As stated above, Idid not like how she changed voices.

Everyone has a story - AMAZING

My Name is Mahtob
I would like to start with, I never heard of ‘Not without my daughter’. I will find the movie to watch. This biography, was a wonderful varied journey, to read. As any life, there happens to be many peaks and valleys. I found the saying to be truthful ‘A child is very resilient’. She went through a lot, she achieved a lot, and was rewarded much. The rewards received, with which I am referring were not the physical accolades but the inner peace, the strength and abilities of not only coping but prospering.
I was enriched by this read. Although you are not to compare one life to another, I have been blessed beyond measure. With gratitude I am filled not enduring the life which she lived.

NOT a sequel or on par with NWMD...disappointing

I read NWMD out of curiosity when I realized the father had been in my husband's medical school class. That book was great; the story gripping. The reader was given a vivid description of the character's experiences. I was expecting something similar although from a child's view. While there were some references to her life and escape (which were informative), most of it seemed to be an explanation of how she finally came to terms with her father.
The Audio Reviewer indicates she was under the "menacing shadow of her father". Yes, she SAYS several times that there was a fear that she would be abducted. She TALKS about using a different name, moving, having relatives stand watch, etc. But these are presented more as facts. You never quite FEEL the emotion.
Several times I wanted to quit this audio, but hung on to the very end. I found it more of a story of how she dealt with her experiences and the "not so normal" life she was required to live. While I realize that her faith and American family were extremely important and vital to her, from a reader's perspective, it was tedious to continually hear how "wonderful" everyone/thing was.
I view this as a story she needed to tell to solidify her experiences and understand how she had become the person she is. I hope writing this helped her. However, as a story for others to read.........
One last thing: the early narration was almost unbearable. Yes, she was a child. We do not have to hear a high-pitched nasal voice to understand that!!!

One of the most inspiring real story most genuinely written on the issue of abusive relationship. Mahtob spent her tender years struggle over her traumatic experience with her manipulative dad: to forgive or not to bear grudges, to trust the liar or to be fooled by his threats and lies, to speak out or to remain silent under public pressure, to fear and to run or to confront the big, shadowy figure, her ruthless and overbearing father who claimed a legitimate ownership not only on her life but also over what she should believe -- that Islam is her only choice since she belongs to him according to Iranian law. Behind the dramatic saga were some helpful, enlightening principles with which the writer fought her way through to become a victor and for anyone who is involving in a difficult relationship to use as a way to escape the psychological entrapment.

The author of the book has quite a way with words, I love how her outlook in life never was tainted by the awful happenings of her life.

Well written and well read. An amazing story and scary also as it’s quite true.