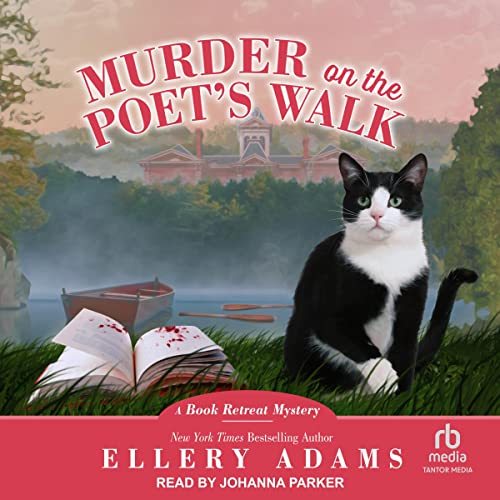 Murder on the Poet's Walk

By: Ellery Adams
Narrated by: Johanna Parker
Try for £0.00

When corpses clutching poems begin turning up around Storyton Hall, resort manager Jane Steward is on the trail of someone exercising poetic license to kill . . .

As Jane eagerly anticipates the wedding of her best friend Eloise Alcott, Storyton Hall is overrun with poets in town to compete for a coveted greeting card contract. They're everywhere, scrawling verses on cocktail napkins in the reading rooms or seeking inspiration strolling the Poet's Walk, a series of trails named after famous authors. But the Tennyson Trail leads to a grim surprise: a woman's corpse drifting in a rowboat on a lake, a crumpled copy of "The Lady of Shallot" in her lifeless fist.

When a second body is discovered, also holding a page from a poetry book, a recurring MO emerges. Fortunately, Jane is well versed in sleuthing and won't rest until she gives the killer a taste of poetic justice . . .

What listeners say about Murder on the Poet's Walk

Nice addition to the series

In this 8th book of Ellery Adams’ Book Retreat series, poets have gathered at Storyton Hall for a competition. The winner gets cash and a job with a leading greeting card company. Competition is fierce and someone will do anything to eliminate the best writers. It’s a good set up. Some surprises, but not my favorite of the series. It’s a little sappy with the romance and love poetry. I like how Jane’s boys are growing up and becoming care takers of the place and protecting their mom.

Another amazing book! This series is so engaging, and the characters are extraordinary. I do hope the next one in this series is soon. Ellery Adams is so talented. Thank you!