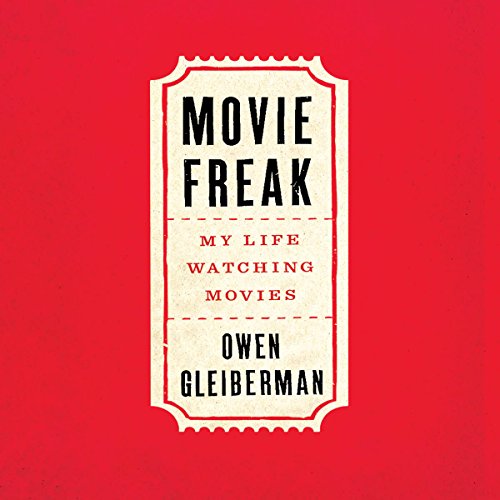 Entertainment Weekly's controversial critic of more than two decades looks back at a life told through the films he loved and loathed.

Owen Gleiberman has spent his life watching movies-first at the drive-in, where his parents took him to see wildly inappropriate adult fare like Rosemary's Baby when he was a wide-eyed 9 year old, then as a possessed cinemaniac who became a film critic right out of college.

In Movie Freak, his enthrallingly candid, funny, and eye-opening memoir, Gleiberman captures what it's like to live life through the movies, existing in thrall to a virtual reality that becomes, over time, more real than reality itself. Gleiberman paints a bittersweet portrait of his complicated and ultimately doomed friendship with Pauline Kael, the legendary New Yorker film critic who was his mentor and muse. He also offers an unprecedented inside look at what the experience of being a critic is really all about, detailing his stint at The Boston Phoenix and then, starting in 1990, at EW, where he becomes a voice of obsession battling-to a fault-to cling to his independence.

Gleiberman explores the movies that shaped him, from the films that first made him want to be a critic (Nashville and Carrie), to what he hails as the sublime dark trilogy of the 1980s (Blue Velvet, Sid and Nancy, and Manhunter), to the scruffy humanity of Dazed and Confused, to the brilliant madness of Natural Born Killers, to the transcendence of Breaking the Waves, to the pop rapture of Moulin Rouge! He explores his partnership with Lisa Schwarzbaum and his friendships and encounters with such figures as Oliver Stone, Russell Crowe, Richard Linklater, and Ben Affleck. He also writes with confessional intimacy about his romantic relationships and how they echoed the behavior of his bullying, philandering father. And he talks about what film criticism is becoming in the digital age: A cacophony of voices threatened by an insidious new kind of groupthink.

Ultimately, Movie Freak is about the primal pleasure of film and the enigmatic dynamic between critic and screen. For Gleiberman, the moving image has a talismanic power, but it also represents a kind of sweet sickness, a magnificent obsession that both consumes and propels him.

"Film critic Owen Gleiberman narrates his memoir with a candidness that reinforces the frankness of his writing.... Thought-provoking listening for fans of film and pop culture." ( AudioFile)

What listeners say about Movie Freak

A deft weaving of autobiography and cultural analysis by a master prose stylist a great tour through the well-examined life of one of this era's top critics.

How can I listen

I was really excited because I am a huge movie fan. Went to play it and nothing. Bummer I would love to give this book a chance

Insightful at Times, Exasperating at Others

I would say that the book might be more compelling for those aspiring to be movie critics rather than for just anyone who might consider themselves a "Movie Freak." Gleiberman largely reflects on his own experiences as a critic- going into the politics of the job and the importance of holding to one's own opinion despite what others say. Select readers may find the book thought provoking, while others will undoubtedly think it tedious. As one who loves watching movies and reading reviews, but certainly not writing them professionally- I'd have a hard time disagreeing with either group.