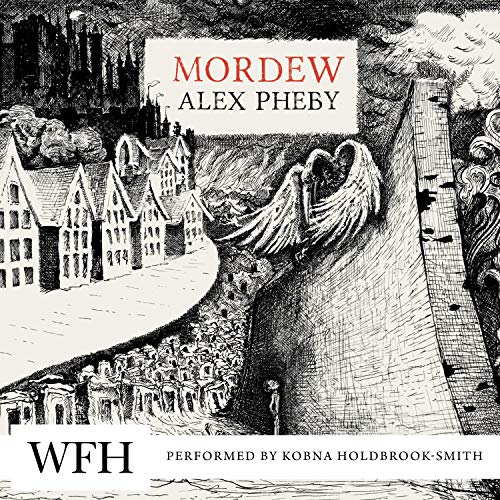 By: Alex Pheby
Narrated by: Kobna Holdbrook-Smith
Try for £0.00

Welcome to Mordew - the first in a fantastic new trilogy from the Wellcome Book Prize-shortlisted writer Alex Pheby.

God lies defeated, his corpse hidden in the catacombs beneath Mordew. On the surface, the streets of this the sea-battered city are slick with the Living Mud and the half-formed, short-lived creatures it spawns - creatures that die and are swept down from the Merchant Quarter by the brooms of the workers and relentless rains, where they rot in the slums.

There, a young boy called Nathan Treeves lives with his parents, eking out a meagre existence by picking treasures from the Living Mud - until one day his mother, desperate and starving, sells him to the mysterious Master of Mordew.

The Master derives his power from feeding on the corpse of God. But Nathan, despite his fear and lowly station, has his own strength - and it is greater than the Master has ever known. Great enough to destroy everything the Master has built. If only Nathan can discover how to use it.

So it is that the Master begins to scheme against him - and Nathan has to fight his way through the betrayals, secrets and vendettas of the city where God was murdered and darkness reigns....

"Brilliant.... Extraordinary.... An extravagant and unnerving marvel." (The Guardian)

"Weird and wonderful, bleak and beautiful...[Mordew] is an extraordinarily vivid piece of world-building." (The Sunday Express)

What listeners say about Mordew

This is really great audio acting. Kobna Holdbrook-Smith is, in my view, the pre-eminent voice actor of our times. He reads with care and accuracy, and is clear but also natural. And he's exceptionally good at characterisation through voice, always making it clear who is speaking. His command (and I mean *command*) of a range of accents is truly impressive and, unlike a lot of male actors, he is able to voice female characters realistically without it sounding like some kind of caricature (in this, he is as good as e.g. Timothy West).

Basically, I loved this performance, my favourite voice being that of Anaximander the dog, who sounds like a highly competent American bureaucrat. Holdbrook-Smith is, to my ear, flawless and highly recommended.

A dark world where slumlords, manipulative parents and all out psychopaths compete for power in a city-state itself on the verge of it's own self-destruction.

Wonderfully narrated by Kobna, so many different, strong voices making the story easy to follow. Great story, based in the fantasy and mystical world of Mordew.

OK but more YA than I expected

Excellent voice performance. The book was OK. I mostly felt that it lacked depth and nuance.

Best Audiobook I have ever listened to
Voices for the characters
The narrator's voice is superb.

the book itself is absolutely brilliant

can't wait for the next one

loved it, the first act particularly. kobna holdbrook-Smith is one of the best narrator's on audible imo. loads of new and interesting fantasy ideas, very detailed and well written. can't wait for the next one!

Sections, not in chapter form for forwarding. Just too much descriptive of place for me.

Sort of like Oliver Twist but none of the characters appear to have any agency. Stuff happens, lots of terrible stuff, much of it also impressively disgusting. Cool ideas, with the living mud and the glass road, but the plot doesn't really go anywhere you just wallow in the grim surreality. High points for me were the introduction of Anaximander the cyborg dog (finally some suspense, and proper mythical absurdity) who was then HARDLY EVEN IN IT (not a spoiler, just don't get your hopes up). Then it picked up a little once Dasheeny came on the scene in the action-packed final quarter, with moments of horror as revelations are made, but mostly the characters were so thinly manifested and powerless that I didn't care about anything that happened.

I will need to go back and re-read the Gormenghast trilogy, I can see why the comparison has been made but I remember its language and imagery being... expansive fantasy, filled with silly jokes (so many high quality puns/neologisms - Steerpike, Sepulchrave, Prunesquallor)

Dark, desolate, epic and beautiful. Twisting turning plot filled with both likeable and vile characters. Detailed descriptions bring the whole map alive, right down to the filth of the living mud.
Kobna Holdbrook-Smith is one of my favourite narrators and as always he brings the characters to life.
Mordew is now one of my favourite books.
Looking forward to the sequel.

Great story, great narration. But Audible has split the whole story into only 3 chapters, making it impossible to navigate the book.