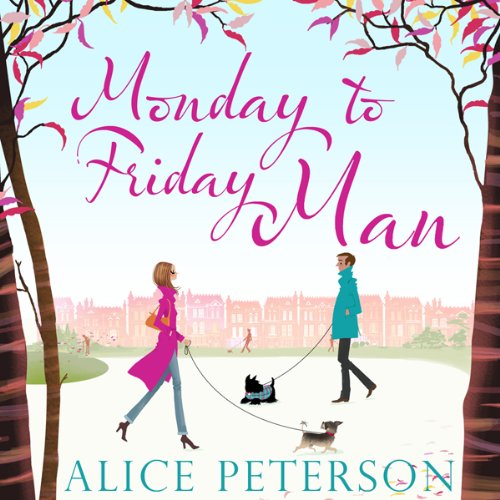 By: Alice Peterson
Narrated by: Karen Cass
Try for £0.00

What do you do if you're 34, single, and recovering from being jilted two weeks before your wedding day? This is the dilemma Gilly Brown finds herself in. While friends are marrying, having children, and moving into the depths of the countryside, Gilly finds herself alone in London and holding on to her fractured family with their tragic past.

It's time to meet new people. So, she decides to get a Monday to Friday lodger, and after a succession of alarming interviews finally finds the perfect one in the shape of handsome reality-television producer Jack Baker. Gilly falls for Jack's charm and is transported into an exciting social whirlwind of parties, dining out and glamour. When Jack is introduced to Gilly's family and friends, it's only the attractive and eccentric Guy, the newest recruit to her dog-walking group, who isn't quite so convinced about Jack's intentions. As Guy watches them grow closer, his suspicions of Jack and his feelings for Gilly deepen. Is Jack so perfect after all...? And what, exactly, does he get up to at the weekends?

What listeners say about Monday to Friday Man

i really liked this book it moved at a good pace and the characters had good depth without being to drawn out,the ending was a little predictable but the journey there was good

Would you try another book written by Alice Peterson or narrated by Karen Cass?

Would you ever listen to anything by Alice Peterson again?

Not unless it was advertised as better than this one

Have you listened to any of Karen Cass’s other performances? How does this one compare?

Could you see Monday to Friday Man being made into a movie or a TV series? Who would the stars be?

This book seemed to have been written using a tick list of popular chick lit themes without any originality, Totally predictable.

Great title but afraid book not up to expectation.

Started this book and thought it sounded good, but unfortunately it went nowhere. The story was predicable I was very disappointed. Afraid this one I will not listen to again!