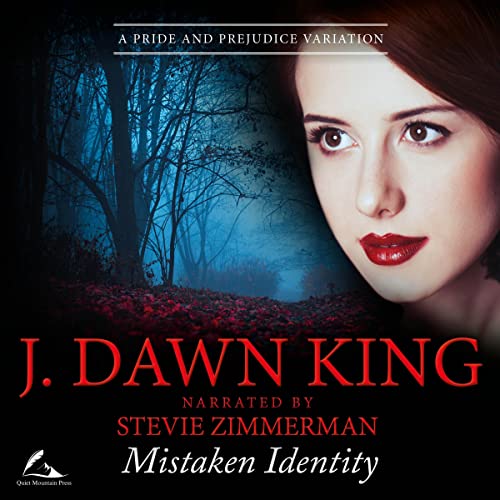 By: J. Dawn King
Narrated by: Stevie Zimmerman
Try for £0.00

When Fitzwilliam Darcy’s life is threatened, he seeks refuge in Hertfordshire, where he meets a woman who looks remarkably like the female who twice shot at him. Why was Elizabeth Bennet trying to kill him? How could he be attracted to her when he should do everything in his power to stay away?

Accidentally mistaking Mr. Darcy for someone else, Elizabeth Bennet determines to have nothing to do with him, until she learns that her first impression might have been a mistake. Where she expected arrogance, he was kind. When she anticipated a lie, he proved himself trustworthy. Who was the man behind the name Fitzwilliam Darcy, and why was she drawn to him despite knowing he was dangerous?

In this regency romance with a hint of dark mystery by best-selling author J. Dawn King, the true natures of the characters from Jane Austen’s Pride and Prejudice are revealed as they search through a complex web of deceit to find hope and lasting love.

What listeners say about Mistaken Identity

I love a good mystery and I love JAFF. Usually a J. Dawn King JAFF, narrated by Stevie Zimmerman would be an obvious choice for me.

This book offered some interesting twists in characters, but no plot twists which would be great in a mystery.

Since we knew from the start who the villain(s) were, and what the motivation was in the crime, there were no real surprises. In fact, the rest of the characters spent far too much time trying to determine who was guilty and why, often repeating the same guesses.

At one point I even wondered if Ms. King was trying to wipe out all but the most central characters, either by death or dastardly behavior. If she is no longer interested in the P&P characters, I would love to see what she could do with her considerable talents on any of Ms. Austen’s other great stories.

Stevie Zimmerman, as always, was perfect in her tone, ability to voice multiple characters and accents, and acting out the story, bringing it to life.

Throughly enjoyed listening to Mistaken Identity. The narration was easy to listen to as her voice was soothing.

Loved the mystery. Very well written. I just hate it when the writer makes the sweet one so very weak in mind and character. Although they should have made Caroline and The other man.....no spoilers....lol. ..or just Caroline herself the the truly bad one....she already is.

Really good with a twist

I thought this was a great take on P&P. villains one doesn't expect, new characters to appreciate and MURDER!!!!

The narrator does a great job!

Loved it. It had some angst to it. But it was needed for the plot. It was well written and witty in an Austen way. Great Jaff.

This is a murder mystery romantic thriller, and I was powerless in staying up til 5AM (on a weekend) to finish it!

There are so many mysteries tied into it that you keep guessing at what else could be about to happen - and as usual J Dawn King delivers many unexpected results!

Stevie Zimmerman performed as impeccably as ever, with great voices for both men and women and easily distinguished voices for all characters!