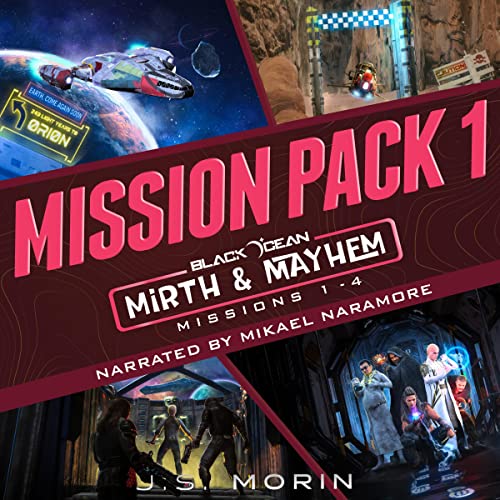 The galaxy isn't ready for Mort and Chuck.

A traveling con man poses as a vintage comedian and tours the galaxy with wife and kids in tow. When he picks up a hitchhiking wizard desperate to flee Earth, they become a hilarious mixed family. Crime, comedy, and magical mayhem are in store.

Mission 1: Know When to Run

A prominent wizard makes a deadly mistake and runs out his welcome on Earth. A shady comedian with a family and his own starship decides that a wizard hitchhiker is a risk worth taking. Despite bounty hunters, crime syndicates, and magical law enforcement on their trail, he just may be right.

Sometimes lying low means flying low. Chuck and Mort head to a dusty colony in border space, hoping to lose their pursuers. But old debts and Brad's hijinks make sure this is anything but rest and relaxation.

Chuck books a gig on a missionary ship operating outside ARGO space. They have to be beyond the Convocation's reach here, right?

But wizards aren't the only threat in the galaxy, and beyond ARGO's law and order, pirates operate with impunity...and missionary ships are unarmed.

The missionary ship incident caught the Convocation's attention back on Earth. Now, suspecting they have Mort cornered, a hand-picked team of wizard-killers comes to collect his skull.

There's nowhere to run. The only way out: lying like their lives depend on it.

Black Ocean: Mirth & Mayhem follows a mismatched duo of itinerant comedian and outlaw wizard as they roam the galaxy trying to eke out a living and stay ahead of the consequences of their actions. Black Ocean: Mirth and Mayhem looks at an earlier era in the Black Ocean universe. Returning listeners get to see how some of their favorite characters came to be. Fans of morally gray heroes and slick-talking con men will love this series.

As a massive fan of J.S. Morin Stories, especially The Black Ocean ones it is wonderful to hear the origins of the adventures.
As always Michael Naramore narrates the story beautifully!
Definitely needs to be made into a TV series!

This is the first book I've really listen to that mergers sci fi and fantasy.

The characters are great and a nice miss match. The han solo to the Darth Vader partnership.

The bit that really blew me away was how good the narrator is.

His repertoire is out standing. From being able to narrate women to various make characters. The floating wizards, the prolonged words from Chuck... and so many more. To many to mention.

I thoroughly enjoyed this peek into Morts past! and another great performance by the narrator!!

Leave the man alone for a while, and JS Morning comes out with another set of books to explore the Black Ocean universe, and it's a prequel too. Looking forward seeing where this goes, I've enjoyed all of the other books in the Universe.

That said, if Morin was going to write a prequel, couldn't he have gone to the days of Merlin. I think it would be a hoot to read a fantasy series about the "true" nights of the round table and the shenanigans they got themselves into, and how Merlin had to step in to save the day. Series can skip forward to various other wizards in the Black Ocean history, to include the first wizard to Astral Drop.
Just a thought from the peanut gallery.

Great to see more in the Black Ocean

I have loved all of the Black Ocean stories and I am very glad to see another spin off. I loved the 1st and 4th stories because Mort, but the middle 2 were more about young Brad than Mort and I found them a little disappointing. But, I did particularly enjoy the 4.5 stow-away even though that did not involve any Mort magic either.
As always, the narrator did a great job with voices. Every character very distinct and a very good job with the female voices for a man.

J. S. Morin and Mikael Naramore produce such compelling stories that I can barely make each collection last a week. The pacing, cleverness and adventure never fail to disappoint. I can only hope that their work continues for years to come.

These books are like watch an action comedy movie. Great way to destress from the day.

I am so happy to hear more of the exploits of Mordechai The Brown! My absolute favorite wizard
if you are a returning fan then you know what to expect, if this is your first dip in the Black Ocean then buckle up its a fantastic ride!

Good easy listen. narrator was great. The comedy that Chuck does seems very forced but in the view of “classic old comics” it fits. Looking forward to next pack!

So I'm likely one of the rare fans who didn't realize that this had come out last year and only recently stumbled upon it...periodically looking at series I've enjoyed to see if any new books had come out. Since the original 16+ book series for Black Ocean has been completed for a while and 2 successive (and mostly successful) spinoffs have also come iut and been completed, I didnt check back until mid way thru 2022.

ALL of that to say...WELCOME BACK! Knowing that this is a prequel to the OG of the series, I grant some time/grace to get into the series. It doesn't take long and its been a refreshing look into the beginnings of Mort and Ramsey. With one of the short stories we already knew a bit about Mort's past related to leaving his family. But this explained it more fully...among other back stories starting to fill in. Its been a mostly great romp thru the Black Ocean, but I actually thought there might be a bit more "mirth and mayhem" than we've seen thus far. Perhaps its building up to that in the next 4 book entry? But im enjoying it even if its a tad lighter on the M&M than I thought or expected...

Right now I dont know if 8 books or 12 or 16 will be the totality of the this prequel universe. It seems like there hasn't been a book 9 released for a while so I'm guessing it may just be an 8 book series. I was sort of hoping for 12-16 since there likely is enough years in the Black Ocean between this and the start of the OG series. Either way, looking forward to books 5-8 starting in 3. 2. 1...deep into the Astral we dive!

ps. as always Mikael Naramore is one of the best in the biz and he is the perfect match for this series (I've listened a little bit for some other series he has done, non JS Morin books,, and while he's good, thus far the JS Morin universes he is just a perfect fit for). So kudos!

loved it! give me more! the combination of wizards and space is a perfect story

better all the time

as always the story is great byits completed by fantastic audio work. Can't wait for the next set.

just the best. the perfect story getaway when life throws a nasty little curveball. thanks for the story!