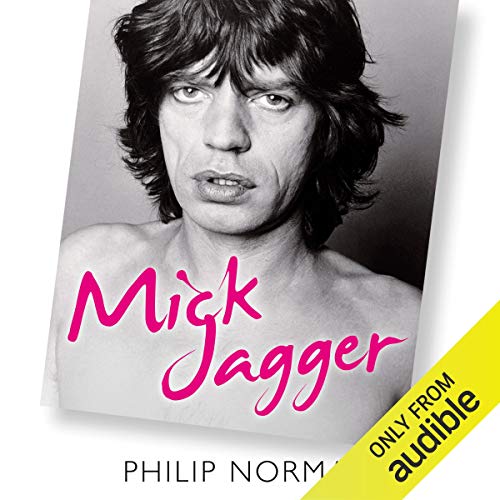 By: Philip Norman
Narrated by: Cameron Stewart
Try for £0.00

Bestselling biographer Philip Norman offers an unparalleled account of the life of a living legend, Mick Jagger. From Home Counties schoolboy, to rebel without a cause, to Sixties sensation and global idol, Norman unravels the myth of the inimitable frontman of The Rolling Stones. Mick Jagger charts his extraordinary journey through scandal-ridden conspiracy, infamous prison spell, hordes of female admirers and a knighthood while stripping away the fame, wealth and idolatry to reveal a story of talent and promise unfulfilled.

Understated yet ostentatious; the ultimate incarnation of 'sex, drugs and rock 'n' roll', yet blessed with taste and intelligence; always moving with the Jagger swagger yet modest enough to be self-deprecating, Mick was a paradoxical energy that reconfigured the musical landscape. This revelatory tour de force pays tribute to a flawed genius who realised the dreams of thousands of rock pretenders: longevity.

What listeners say about Mick Jagger

this book was informative but unfortunately seemed to have been written by someone who didn't like the subject at all. coupled with the awful narrator it left a book without warmth.

So well written , I could nt wait to hop into bed each night to listen to it,scintillating, gossipy,bitchy ..very informative but indulgent at the same time .. Totally recommended!

well written and researched. subject is difficult to pin down because of his camillion personality. The females lives he has interacted with have all been affected in various ways, in the most long term trists to their extreme detriment. pity this bio finishes in 2011 because of the very sad passing of the woman who the book claims tamed him. the writers take on this would have been interesting. However as a performer there is no doubt he's the best. As a man and human who we can only judge by how he's treats people he is an odious person.

Its amazing how different two rock biogs can be. This is very piss-taking. This is due partly to Norman, partly narrator. If you compare this to the Keith Richards biog you would imagine the two protagonists coming from two entirely different bands.
This is jocular and really trivialises Micks life and vanity, whilst Richards' is lyrical, almost poetic. Victor Bockris obviously has a real reverence for his subject, whilst Phillip Norman, well....and who is to say who's right, who captures the essence of the Stones. Its still an interesting listen, but it doesnt really pay proper respect to the very real influence the Stones and Mick had on popular culture because it feels too sensationalist. Richards comes across as a modern Byron and Mick feels like Russell Brand

Quite a revealing excellently researched book as always from Phillip Norman. I don’t mind Mick as it goes and this book goes a long way to gaining some understanding into the subject. Along similar lines to his McCartney one. Both are a long way short of his frankly brilliant study of John Lennon though.
One quibble I have (as I did with McCartney audio book) is the narration. Nothing personal against him, but his slightly posh English accent just felt a bit incongruous with the subject matter at hand. Again, I’m spoiled as the Lennon one had such fantastic narration. It’s only really a minor quibble and my own personal taste.
It’s worth getting if you’re on the fence about it.

this old RS fan loved it!

OK, I'm biased: I've had a thing about Jagger for half a century!!! But this is a really well crafted biography and well read by CS. Why not 5 stars? Thought it tailed off but perhaps that's when I was hearing things about Jagger that disappointed me! Highly recommended for anyone who still goes for the Stones!

Good but not amazing

Not sure I really discovered anything new. No extras or surprises and the writer (I like his other books) didn’t really have much to reveal about MJ
Also the narrator was a little over dramatic in his tone often sounded like he was ready the news

I think the narrator made the book much better than it really is. His snappy delivery on some incidents give you belly laughs.

I really enjoyed listening to this book - its 22 hour duration seemed to pass in no time, always an indication of a compulsive and enjoyable audio book.

Would even listen this one over again...Loved it!

I am a huge Stones fan, though Jagger is not really my fav. However, the story is so well written and so so funny; hearing all about the "Tyranny of cool". The things he did-just to appear cool and keep 'current'. What a laugh. Some stuff not so funny of course, like the way he controlled and treated the women in his life; from his mother, to his various partners and wives. However, I felt the way the book was written was excellent in that it covered his positive side and attributes, also the not so flattering aspects of his personality. So it felt balanced. The story also gave lots of info, unlike some bios that are way too guarded. You really had a sense of what it must have been like to be around this incredibly talented; though narcissistic man.

I enjoyed the book. Thought the humour added a bit of spice and the reader made the combination of detail and humour delightful.

Mick's best and worst in one book

If you could sum up Mick Jagger in three words, what would they be?

What does Cameron Stewart bring to the story that you wouldn’t experience if you just read the book?

A comfort with the English language

I enjoyed it so much I listened to it once & now I am listening to it all over again!