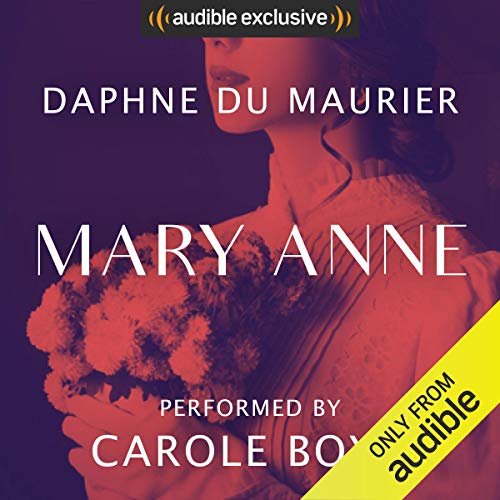 By: Daphne du Maurier
Narrated by: Carole Boyd
Try for £0.00

Inspired by her great-great-grandmother's tempestuous relationship with the men in her life and absolute disregard for convention, Daphne du Maurier delivers a captivating piece, featuring one of her most audacious and ambitious heroines yet. After abandoning her drunken husband, and unwilling to return to the crippling poverty of her youth, Mary Anne begins to work as a high-class escort. Fortune favours her as she finds herself in the arms of The Duke of York and Albany, Frederick Augustus.

Becoming his mistress, Mary Anne is seduced by the Duke's lavish lifestyle and the power it bestows on her. She uses her charms and his title to trade in military commissions, venturing down a dark and seductive path which few women would have dared to go down.

Set in the Regency period, du Maurier contrasts the luxurious and lavish lifestyle of the upper echelons of society with that of the impoverished lower class. She also highlights the importance that Victorians placed on female virtue and the consequent ticking clock which Mary Anne would always be up against. Much like her ancestor, Daphne du Maurier was an intelligent, creative and resilient woman. A celebrated author and playwright who mastered the romantic and gothic genres, Daphne's masterpieces continue to entertain and intrigue us today and Mary Anne is no exception.

Carole Boyd trained at the Birmingham School of Speech and Drama where her vocal talents earned her the principal national prize for voice as well as the Carleton Hobbs award. She is a British actress, best known for her performances in The Thief Lord, Peter Kay's Animated All Star Band: The Official BBC Children in Need Medley, Bodger and Badger, Virtual Murder and Hetty Wainthrop Investigates.

Carole voices the character of Lynda Snell in the BBC Radio 4 programme, The Archers as well as all of the female characters and most of the schoolboys in Postman Pat. Her audiobook narrations include The Tenant of Wildfell Hall, Atonement, Jane Eyre, The Turn of the Screw and Middlemarch.

What listeners say about Mary Anne

I love Daphne du Maurier's books, and this one is as wonderfully written as the rest. It's all the more interesting because it's based on the life of the author's great-great-grandmother.

The book starts with a glimpse at the end of the story, which confused me a little, but when I came back to it after I'd finished the book, it was like meeting a friend. Mary Anne's life is told, from her childhood in poor circumstances, through a disastrous marriage, and on to adulthood as she endlessly tries to make a decent living for herself and her children. The odds, however, are against her. At that time, money and everything else was controlled by men - women must rely on men's generosity, or on a good marriage.

Carole Boyd is a truly fantastic audio book reader. Her characterisation of Mary Anne is particularly good, and she reads so clearly and paces the reading so well that it is truly a pleasure to listen. A true professional, we could do with more books read by her.

Would you try another book written by Daphne du Maurier or narrated by Carole Boyd?

What was most disappointing about Daphne du Maurier’s story?

It was hard going!! and a bit boring

Would you listen to another book narrated by Carole Boyd?

Do you think Mary Anne needs a follow-up book? Why or why not?

Not what I expected from Daphne du Maurier. Have liked and enjoyed her other books

For all followers of the Regency Period

A well-written story taking one right into the period so that the torment of being without funds, the sounds, smells etc. come alive and draw the listener along with Mary Anne's misadventures. The narrator deserves more than a mention for her fine depiction of all the characters.

Beautifully written, superbly read...faultless in every way. Evokes the era and characters splendidly and Carole Boyd's reading could not be better.

Good story but waffles too much in the end

I was hooked very early on to find out what happens to all the characters, but about 70% of the way through the story seems too drawn out and I lost interest. It actually became a chore to listen too and I did not finish the book - shame

Not, I think, to the author's usually good standard: she usually entertains me with her novels, but this one I'm afraid falls far from my expectations - in short, I have been rather bored by it and therefore would not recommend it to anyone else.

I adore DDM, and I hate to say it of British writing royalty, but this is far, far, far too long. I tuned out for large portions, particularly the account of the court case, and had no trouble getting back into the story. Mary Anne was an incredible, resourceful woman who lived an incredible life, and I’d be proud to claim her as an ancestor too, so I can understand DDM wanting to share every detail. But it needs a good prune.

I loved this book, it has such intelligent dialogue, beautiful words of a bygone age.

loved it. such an intriguing story. highly recommend. could even be a story of today!

Beautifully written but not your usual Du Maurier


If you are ever in a reading slump and want an exemplary story to bring you out of it then read Daphne Du Maurier!

I didn't feel the message or the typical Du Maurier twist in the plot line was as strong or impactful as in other books by her, I had to reread certain sections to come to a conclusion

But the plot was delightful, in the fact that Mary Anne was an emboldened woman for her time, she saw the obstacles of poverty and womanhood and she subverted them.

But there was a natural limit to her power in the plot, which made her a flawed character and took into account the environment in which she lived

The characters were well depicted and flawed, the plot was interesting and fast paced for the time in which it is set.

The writing was exquisite, as is typical for a Du Maurier.

The story was immersive, it invested me and made me feel commited not only to the outcome but to the plot as it was in the moment.

daphne du maurier is great - but not her best work

I am a big Daphne Du Maurier fan - Her best work is by far My Cousin Rachel and the narrator of that one is perfect! However, it was very hard for me to get past the narrator of this book - she tries to do accents she can't do. Her voice is almost painful to listen to. The story is pretty involved though it goes through a long slow spell 3/4 through.

This is a grand tale, full of intrigue and mystery and interesting characters. Well read and enjoyable to the last word.