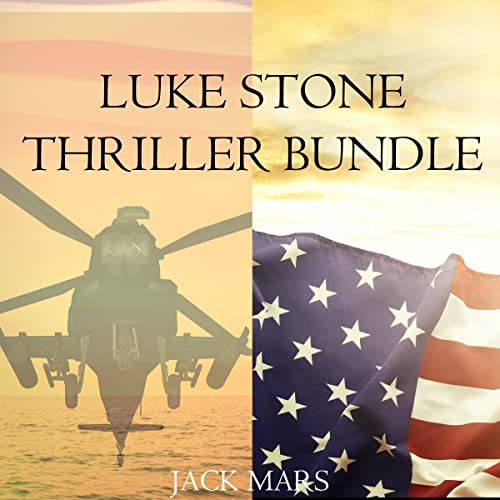 A bundle of audiobooks #1 (Any Means Necessary) and #2 (Oath of Office) in Jack Mars’s Luke Stone Thriller series—a bestseller with over 150 five star reviews!

In Any Means Necessary, nuclear waste is stolen by jihadists in the middle of the night from an unguarded New York City hospital. The police, in a frantic race against time, call in the FBI. Luke Stone, head of an elite, secretive, department within the FBI, is the only man they can turn to. Luke realizes right away that the terrorists’ aim is to create a dirty bomb, that they seek a high-value target, and that they will hit it within 48 hours. A cat and mouse chase follows, pitting the world’s most savvy government agents versus its most sophisticated terrorists. As Agent Stone peels back layer after layer, he soon realizes he is up against a vast conspiracy, and that the target is even more high value than he could have imagined—leading all the way to the President of the United States.

In Oath of Office, a biological agent is stolen from a biocontainment lab. Weaponized, it could kill millions, and a desperate national hunt ensues to catch the terrorists before it is too late. Luke Stone, head of an elite FBI department, with his own family still in jeopardy, has vowed to walk away—but when the new President, barely sworn in, calls him, he can’t turn his back on her.

Political thrillers with non-stop action, dramatic international settings, unexpected twists and heart-pounding suspense, the Luke Stone series is an explosive new series that will leave you listening late into the night.

Audiobook #3 in the series, Situation Room, is also now available.

Great author and good story lines however the bundle package is abridged which was disappointing.

I could not finish the book. Narator sounds like a cimputer stringing words together without pause or rhythm. Horrible!

Not impressed but finished it

Amazing how many rules one federal agent can break and the story line makes it ok to do so. Not the best story I've ever listened to, fairly frustrating in several places, too many other choices out there. I listened to book 1 and 2 because it was a bundle deal. Narration: voices were great; however, the pace of reading was unbearable. I had to place it on 1.25 speed just to make it sound normal.

the story is good, I don't like the way the author gives enormous amounts of detail over minutiae. I did not like anything about the narrator, he did not appeal to me in any way. I'm not looking for the Nextbook

With stories like these, I'm now a huge Mars fan!

"Let every nation know, whether it wishes us well or ill, that we shall pay any price, bear any burden, meet any hardship, support any friend, oppose any foe to assure the survival and the success of liberty." This JFK quote, read by the protagonist, embodies his tenacity as he seeks to save family and country again and again. Suspenseful and scary in its possibly-real plots. Recommended!

Monotonous narration with tons of Mispronunciations. Ugh. Thankfully the story made up for it! Bring back Edoardo Ballerini for Jack Mars!!

I am missing chapters?

It's like a whole chapter or two are missing from book 2. What happened on the yacht? struggled to get through bundle. Narration could be better.

It's like Agent Zero and Gray Man just more political in nature. Still a good read.

Great pacing, action packed, and well read. Series is interesting, and just different enough from other action thrillers. Narrator does a great job.