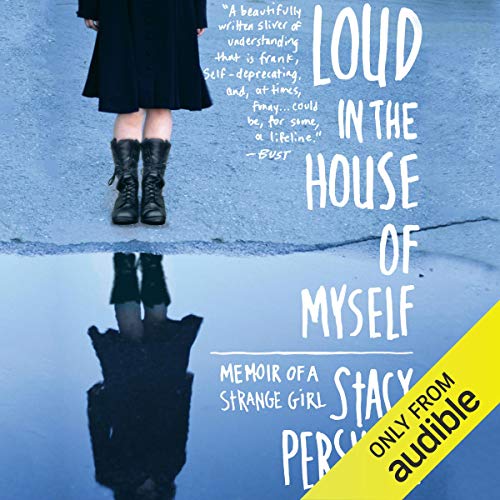 Loud in the House of Myself

“An utterly unique journey down some of the mind’s more mysterious byways . . . ranges from the shocking to the simply lovely.” (Marya Hornbacher)

What listeners say about Loud in the House of Myself

This book is absolutely incredible. Stacy presents her journey in full, brutal, heartfelt and humorous technicolor.

If you have ever wondered what it would be like to experience life with BPD or the insane highs of Bipolar, this book will reveal all.

Stacy narrates this herself and I can't imagine anyone else attempting to do it justice.

This is a book that I will return to many times.

If you could sum up Loud in the House of Myself in three words, what would they be?

Beyond the memoir, the author speculates on the mental health world of diagnosis, medication, and treatment.

I found this to be a very intriguing and information memoir, focusing not only on the author’s individual experiences, but also going into detail about the way the mental health system works for those diagnosed with Borderline Personality Disorder and Bipolar. It serves as a source of experiential knowledge for those who may not understand these disorders and the hardships involved both for the suffering and for the psychiatric teams who sometimes struggle to help those with BPD due to the very nature of the disorder.

Pershall relates to a quick overview of her life and the instances that defined her as she grew up and moved through the system. It’s relatively short, but I found it to be an interesting, well written work that doesn’t sound whiny or unrealistic or embellished. I would have liked to see a little more memoir that was more in-depth, as many of the scenes are general or just speculate on how medication/doctors work.

Overall, if you’re looking more a memoir based on mental health that’s a quick read and not incredibly triggering, this may be the book for you!

This was an outstanding audiobook. So honest, so informative, so heartbreaking, and so hopeful. Stacy Pershall has logged a lot of time in hell, and she's not only scrambled her way back to earth, but managed to turn her history and horrific suffering into a truly excellent book. I appreciate and respect her so much. I also enjoyed hearing her read her story. Bravo!

A difficult and somewhat annoying listen

Would you listen to Loud in the House of Myself again? Why?

No, I probably would not listen to the audio edition again. It took me days to get through the book the first time. The story was not too bad, but the narrator's voice grated on my ears. However, since I was interested in the subject, I pushed through to the end. I think that if the listener can tolerate the narrator's voice, they would find the book more entertaining.

I was not fond of the narrator. Her voice was high and grating, which irritated my ears. But if another listener does not mind her voice, I think they will appreciate the story.

The story is about a woman's difficulties is trying to deal with her bipolar disorder. I found the subject interesting, but the story was a bit jerky as it jumped from one scene to another. The other problem I had with the book was that I felt it was a little too self-congratulatory. Often I felt that the author was bragging about how sick she was, how bright and intelligent she was, etc. It have me the impression that she was saying that she was better than others. Not that I exactly expected self denigration. But I did get tired of the author patting herself on the back. Whether this was the product of the book itself or the audio narration, I do not know.

What made the experience of listening to Loud in the House of Myself the most enjoyable?

Unlike some previous reviewers, I found the narration quite compelling. The author's story is presented in the author's own voice. She has a manner of brilliant understatement that, even when describing the more harrowing events, never loses its wry humor.

There's only one real character of note in this book, and that's Stacy herself. I share a similar socioeconomic background with her, also growing up in rural Arkansas, and I can relate to feeling like an outsider in my own skin.

The moments I enjoyed the most were her description of her college life, particularly during her freshman year.

It's done with such witt and sincerity, by an author whose talents and career includeds writing. It combines her valuable first- hand insight, her thoughts, feelings, and experience, and applies core fundamentals of borderline personality disorder and bipolar disorder. It a great example of a case of both. It is medically accurate, but more importantly gives depth and personal insight to an otherwise dry "five out of the nine symptoms" listed in the DSM (Diagnostic and Statistical Manual) for borderline personality disorder.

She tasks the reader step- by- step through time. it's written in the first person, which gives the reader the chance to get into her shots and share those experiences as she describes them.

I usually take a long while listening to an audible book, but I raced through through this one because I spent all my free time to listening to the book. I didn't want to put in down.

This book was like falling into a good friends arms, a person who finally understood and validated every horrendous experience and emotion I have logged in my past. Thank you for the big hug and validation.

Breathtaking, honest insight into the mind of a struggling young woman. Every parent with an anorexic child should read.

Very insightful easy to follow and will leave a lasting imprint. I would highly recommend!

she spoke eloquently and the book was informative. I was able to relate to some things

Great book depicting the ups and downs of BPD. BPD isn’t a terminal illness that it was once thought to be, you can heal from it but it takes a lot of work