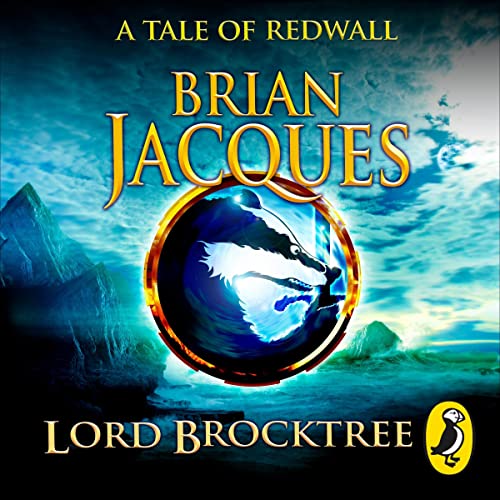 By: Brian Jacques
Narrated by: James Faulkner
Try for £0.00

The thirteenth book in the beloved, bestselling Redwall saga—soon to be a major Netflix movie!

Salamandastron, under the guardianship of old Lord Stonepaw, is under threat from an enemy of immense and terrifying power. Ungatt Trunn, the wildcat who can make the stars fall from the sky, has attacked with his Blue Hordes and is determined that the fortress should be his. The mountain's defences are weak and it seems that nothing can stand in his way.

Nothing, that is, but the badger Lord Brocktree, who is drawn to Salamandastron by an undeniable sense of duty. But if he is to rescue the mountain from Trunn and his verminous hordes, he must gather about him an army capable of defeating them in battle. Together with the irrepressible haremaid, Dotti, and a host of brave creatures, Brocktree journeys to Salamandastron to fulfil his destiny.

What listeners say about Lord Brocktree

I enjoy reading the Redwall series, and I am really a big fan of the full cast used for the other Redwall audiobooks. Unfortunately, James Faulkner is not the right choice for narrating a Redwall book. The accents he tries to use for the different characters are incredibly hard to understand at times, even with the use of headphones.

Great balance of fantasy and folktale

Lord Brocktree is an excellently written adventure for both young and old readers alike. Its fantasy elements are similar in tone almost to Robin Hood, but with a bit of flare that only Brian Jacques can accomplish. Some story arcs, like King Bucko’s challenges, have a sense of folklore about them. Others, like Fleetscut’s and Dotti’s journeys, are classic travel adventures full of memorable side characters and settings. By the end of the book you feel almost as if you’ve been on a long adventure yourself!

Also of note is James Faulkner’s excellent narration. There are a ton of characters in this book and he managed to give each one a voice that brought them to life. I especially loved his voice for Lord Brocktree. It was every bit the solid, stoic character to drive the story forward. Would love to hear another Redwall book with his narration.

At last, we have an unabridged audiobook for Lord Brocktree after so many years. Yes, a full cast of voice actors would be preferred but I will take this over nothing. We just need an audiobook for Marlfox, The Pearls of Lutra, The Legend of Luke, and The Rogue Crew for all of our Redwall audiobook collections to be complete! Thank you Puffin Books.

I disagree with the other reviews

I have every red wall book, both in audio format and physical copies. I was sad when I realized there was not a full cast but James Faulkner has a voice that can carry this type of story by itself. This man’s voice is legendary and fits the medieval setting of the books. Honestly it did not even bother me only having his voice to read off, and contrary to other reviews I think he did a great job. I hope they make audio versions for the other books that don’t have them, Fantastic books and fantastic narration.

Excellent story, but narrator struggled with pronunciation and accents

Great to see the audiobooks continuing. Hope for future ones, the narrator will prep for on Jacques’ pronunciations and accents. It brings you out of the story when things are mispronounced.

Although I felt that the narrator did a great job, having him do all the voices of the characters was a mistake. I found myself rewinding several time to work out who was saying what as the voices became muddled, and hard to decipher who was who.

Fantastic!! I can’t wait for more!

I want people to know that yes, this is different from what we were used to with the whole cast & author originally narrating the stories but I’d say James Faulkner did a darn good job and I hope he comes back and does all the rest of the ones we’ve been missing! (I also miss Billy Maher’s music of course to accompany his singing but ah well, you can’t have everything.)
A couple of words he does pronounce differently (wrong?) that can jar the old fans: guosim and eulalia. That can be irritating and annoying to hear but maybe in time and a few more books he’ll get it right? Also, his mole-talk is super deep & slow so that might be a little harder to understand than usual for some listeners but again, maybe with time and practice he’ll get better at it (it can’t be easy!)
All in all I really did love it all and I hope he does more!

James Faulkner gives an excellent performance! On par with the late Tony Jay when it comes to deep voiced narration. While not a full cast like the past audiobooks have had, James does an excelent job with character voices. A fun listen!

My heart soared when i saw this new recording, Lord Brocktree is one of my favorites of the Redwall novels. i miss hear Mr. Jacques and his crew reading the stories like an audio play, but Mr. Faulkner has a great voice and i believe that if he (or other possible narrators) goes back and listens to the older recording and learns how alot of things are pronounced and how mole speech sounds the new recordings will do just as well and the classics.