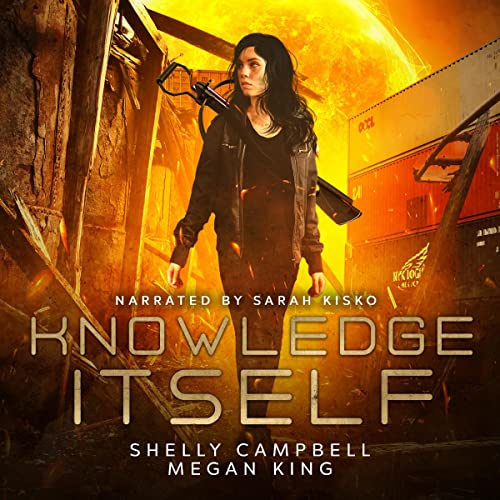 By: Shelly Campbell,Megan King
Narrated by: Sarah Kisko
Try for £0.00

After solar flares wipe out electrical grids worldwide, a small community survives by selling data recovered from decrepit hard drives and rare books. Nostalgic for the days of big business, the commune’s founding members call themselves Corporate and micromanage everyone.

Raised into the hustle, Iris Ecosia’s ADHD brain rebels at Corporate’s strict structure. It’s not all bad, though. She attracts the attention of Robert Lycos, the son of one of the Shareholders, but their relationship comes to a crashing end when she loses focus at a critical moment and a vital piece of equipment is destroyed.

The mistake plunges her into debt. Corporate demotes her to an indentured gardener. Her romance with Robert dissolves. Worse, there are no paid sick days in the post-apocalypse. So when Iris’ whole family falls ill, starvation is soon knocking on their door. Meanwhile, the Shareholders live like tycoons.

Iris and her family are not alone in their poverty or their impotent rage at the corporation who keeps them poor, hungry, and dependent. An underground revolution intent on toppling Corporate wants to recruit her. She can still do big things if she joins them, but if she’s caught, the Shareholders won’t stop at destroying her. They’ll go after her family, too.

What listeners say about Knowledge Itself

I would say this book is narrated and targeted for a young teen audience. Kisko does a good job narrating this book, easily adapting her voice to different male and female characters and was a great fit for this book. But this post-apocalyptic dystopian story is very tame and definitely has a high school feel with kids trying to pass exams, fend off the 'school bully' and misunderstood teen romance. It does have good world building and a couple of interesting, complicated characters but it's a shame we see little of them. It's also a slow-paced book with not a lot of action, and when things finally start to heat up the book ends on a big cliff-hanger which I very much dislike.

I was given this book for free of my own choosing and I voluntarily left this review.

Over 10 hours of great stuff

Wow, over 10 hours of great stuff.... This is really worth my time. I listened to and loved listening to it while driving mostly. It was a revelating and post-apocalyptic storyline that got my attention raised tension, and made me what to listen more. Starting with the assumption that the world is attempting to move forward despite the catastrophic damage to the electrical infrastructure and continuing with the split existence of the Shareholders and the rest of mankind. I can recommend this book.

I got this audiobook in exchange for an honest review.

I received a free copy of this audiobook and I have to say I LOVED IT. I am a sucker for post apocalyptic books-I cannot get enough of them. This one was different from the others I have read which I thoroughly enjoyed. I asked the author if there was another in the series because I am eager to find out what happens next but it has not been released yet. I will definitely be on the lookout for the next one in this series. The narration was great as well-I felt like I was there with the characters.

This type of book wasn’t my usual style but I enjoyed it. It kind of took a bit getting use to, Iris the main character says “sol” and “zeusus” (sorry for spelling if wrong) A-LOT, drove me a little bonkers at first ! But let me delve into the story. It was very interesting, it’s a YA dystopian but not only for YA. The details help bring the reader/listener into the story. It even has details about things that are based on truth (ex: loading a bolt in crossbow and planting certain veggies) The narration was understandable, she didn’t talk to fast had a good toned voice (I noticed a certain speech pattern which kinda threw me off but it wasn’t to bad). The story was slow moving but then eventually picked up. The story hit a sensitive spot when parts of their group made Iris feel as though she was different from others growing up. Very realistic to how I felt growing up. I don’t want to give too much details about the story itself but I did enjoy it, I’m looking forward to beginning the next in the series!

Who holds the knowledge will alter one city's fate

Received as an audio review copy from the narrator Sarah Kisko, this is an honest review. A gorgeous, great dystopian book that wondrously delivered by Sarah Kisko. After solar destroyed modern life across the globe, one gritty community works to salvage knowledge from warn out computer drives and precious paper books. Knowledge as power... especially when it's secrets certain people rather keep buried. For Iris Ecosia, the strict rules imposed by the corporate elite wreck her unique ADHD brain; but despite the setback Iris is close to achieving a prominent position within her community. When things go sideways that forces her family into desperate need, Iris learns valuable lessons as a Gardner that will be here community's saving grace once an enemy forces Iris out of the city completely. Saved by family she thought lost, secrets becomes exposed of showing much people of her community have been lied to. But when a great crisis could determine the fate of her home, Iris discovers just how strong she is to fight back. Realistic, poignant and vividly intense, Knowledge Itself is the series you can invest your time in. Highly recommended.