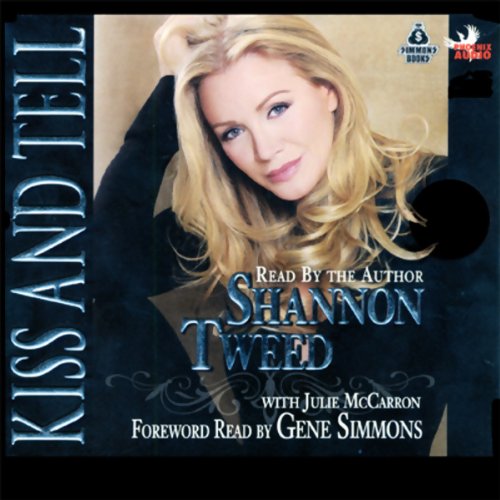 In this long-awaited autobiography, one of the most beautiful women in the world tells her story, from growing up on a mink ranch in Newfoundland with six brothers and sisters to raising two children with a rock star in Beverly Hills.

One of the most popular and best-known Playboy pin-ups ever, Shannon Tweed burst on the scene in the 80s as Playmate of the Year and Hugh Hefner's love interest. She soon became a successful actress, appearing in countless movies and television series. She met Gene Simmons at a party at the Playboy Mansion, and they lived happily ever after with their two children, Nick and Sophie. Told in her own straightforward, no-holds-barred style, Kiss and Tell is a backstage pass to life at the Playboy Mansion, a behind-the-scenes view of one of the biggest rock stars in the world, and the experience of raising two kids in front of the camera.

What listeners say about Kiss and Tell

What did you like most about Kiss and Tell?

Shannon's descriptions of growing up in Canada, her sense of humour - she often laughs at herself

I enjoyed the 80s section - Shannon's burgeoning career in Hollywood and her lack of pretension about it. I liked her respect for Hugh Hefner but also respected how she never took the Playboy mansion seriously.

What does Shannon Tweed bring to the story that you wouldn’t experience if you had only read the book?

Her reveries - small moments where she is reading and seems to recall the event at the same time. It comes out in her reading.

I laughed often. It isn't a particular emotional book - Shannon never really plays for sympathy though there are poignant memories.

It won't be for everyone. Shannon is not particularly famous but her story was interesting from beginning to end.

I haven't listened to too many biographies, so this is one of my first. I became interested in Shannon & Gene from watching their TV show Family Jewels, so to hear a bit of background about how she became who she is today was really interesting to me. The fact she also narrated her own book was a plus for me. I also loved the foreword by Gene Simmons himself and I was laughing out loud at my work at some of the things he was saying. These people are very real and love to laugh and that brings laughter to my life. It's nice to get to know Shannon better because I really didn't know much about her.

Shannon Tweed makes me laugh, cry , and want to be her friend. Entertaining and thought-provoking. Fantastic.

i was a little disappointed. i recently read dirty rocker boys and thought this book would detail the relationship between shannon and gene nore in depth. i thought she would discus the reality show and effects of life on their relationship

I've always been a Shannon Tweed fan, both from her Playboy days and her movie career. So I picked this up with interest.

The audiobook was interesting. Shannon is the reader, telling her own story. She talks about her childhood, then spends quite a bit of time talking about the Playboy years, and then jumps to her family life with Gene Simmons. That's about it. Most of the book dwells on boyfriends and relationships that she's had, and very little on her professional or celebrity career (in film, tv, and modelling).

Not bad, but I would have liked to hear a lot more about her movie career.

I enjoyed listening to Sharon Tweed tell her story. She is an excellent narrator. If she does not already, she should do voice over work. She conveys her story in a natural, honest fashion. I like Gene Simmons more now, ( not that I didn’t before, ) that I heard her story. This is an entertaining and well written listen.

I just love how flowy the book is. Seems like they have a beautiful life together too!

Shannon, if you ever find yourself in orange county New York, please look me up for coffee

Seriously though. Love this woman! Raw and honest, sincere and full of obvious happiness… God bless you and your beautiful family.

I've long been a fan of Shannon Tweed and Gene Simmons. I watched their show and admired their parenting style. This was like a nice conversation (one-way of course) with the same casual air as I would expect from Shannon. I could relate to a lot of her and felt she was super down to earth. I enjoyed listening to her talk most of all and hopes she does another (even if it's not about their lives).

Very interesting and entertaining! I was laughing out loud, and blushing at times with a smile I couldn't take off my face. Very much worth the time. I learned a lot of behind the scenes info.