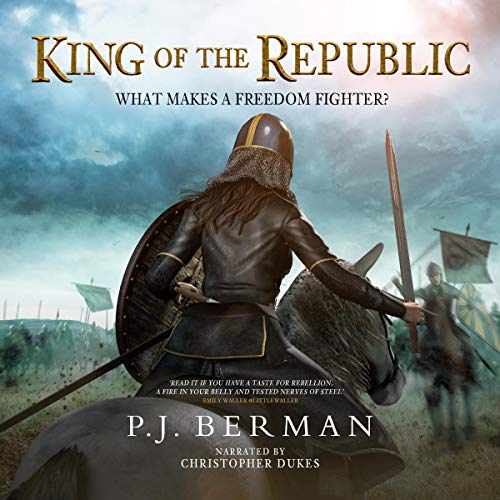 King of the Republic

King of the Republic is the second novel in P. J. Berman’s explosive Silrith series, a new power in the world of epic fantasy.

Queen Silrith has fallen. Now she must rise again. However, when her army lands in Etrovansia in search of reinforcements and political support, their welcome is far from warm. Their retreat from one war could start another.

Ezrina, a vengeful Hentani priestess, feels the weight of expectation placed on her by her tribe. Without Jezna by her side, her headship is a lonely one. Will the arrival of strange new allies prove a welcome help or complicate matters further?

Zethun, an ambitious young politician, rides a wave of public support amid the passion of revolution. Now he must restore order before the mob descends into anarchy.

All three rebels stand on the precipice of their defining moments. There is no going back now.

Other books in the Silrith series

Other books by P.J. Berman

P. J. Berman grew up in Hertfordshire, England. Since then, after a brief but enjoyable period living in Plymouth, Devon, he has settled in the beautiful Welsh countryside of Carmarthenshire.

What listeners say about King of the Republic

I'm not a huge fan of political run religious wars but this book actually makes it interesting and intriguing to follow. Silrith is awesome and continues to be a rebellion and who doesn't love a book with a guy narrator who has an accent. id recommend this series to anyone who enjoys a good political fantasy book (still reminds me a star wars in that regard).

This story has such a good character development.
I really love Silrith! She is strong and someone who grows in these books so much.
Really wanna know where this story will take me :)

I can't wait to see how this ends!

In the second book of the Silrith epic saga, we have new players enter the power struggle. Silrith makes mistakes she pays dearly for, Jostan continues to be his hateful self, converting or killing everyone in his path. Ezrina learns that while an enemy is predictable in their hate, an ally can be far more challenging to anticipate.

So the Game of Thrones continues. I kept referring back to it in my review of the first book, Vengeance of Hope, but the comparison holds true. There are many chess pieces on the board, and even the ones you root for are not the "good guy." But of course there are always bad guys!

I find myself with the same sort of feelings I had while reading Game of Thrones. There is of course an overall contender for the throne that we want to win (the name if the series is Silrith after all,) but she is not ineffable. And some of the other characters are trying to do good as well. So while Ezrina is sometimes thinking of Jezna more than her people, and Zethun lets his new found power go to his head, in the end they are trying to do what's right. So in this chess game it's hard to predict where all the pieces will fall. (I also want to take a moment to compliment the author that his characters' names are pronounced just like they are spelled. While the names are unique, they're still pronounceable and not hard to read. This may seem like an odd soap box to jump on, but it's so distracting when I struggle to pronounce character names in my head while I'm reading. I don't want to trip over them every time I come across them! So thanks PJ!)

That's what I love about this series. I hate being able to predict everything that will happen in a book. It's why I generally veer away from anything romance, because there's really only one way for those to end.

Epic sagas on the other hand? Who the eff knows?! And that's why we love them.

This story is very intricately woven, but not hard to keep track of. The characters are distinct enough for me to remember who they are most of the time, and I loved the ending. Even though I had hints, I didn't see that coming!!! But it all made sense. So props to the author for that very carefully woven tapestry, it's not easy to do! (I may not be a writer myself, but it's rare for me to read a book where I don't find a lot of "convenient" plot holes. Even The Lord of the Rings had big ones - WHY didn't the eagles fly them to Mordor in the first place?!)

I digress. The only thing that knocked off a star for me is that there are shades of mystery without magic, and it seems like you kind of have to choose one or the other. Is there magic in this world or not? I still don't know. Are Ezrina and Jostan truly talking to their gods, or are they religious zealots? There's a vague mention of a battle ground being haunted, is that a thing? Maybe as an epic fantasy reader I'm so used to magic that I just miss it here. But I feel like just a bit of it would add to the story. The battle scenes are a tad overdone to me but that's really just a personal preference. Overall I enjoyed this epic story!

4 stars, I definitely want to see how this ends!