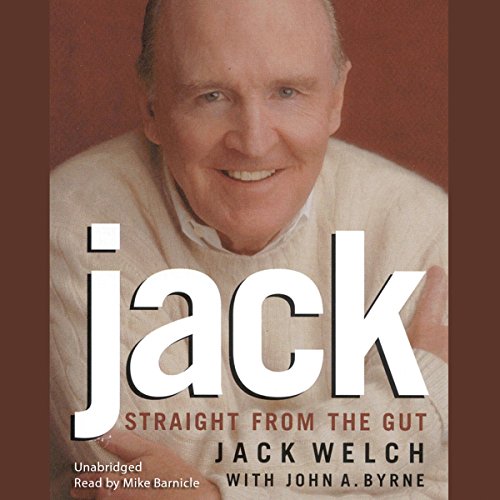 By: Jack Welch,John A. Byrne
Narrated by: Mike Barnicle
Try for £0.00

As CEO of General Electric for the past 20 years, Jack Welch has built its market cap by more than $450 billion and established himself as the most admired business leader in the world. His championing of initiatives like Six Sigma quality, globalization, and e-business have helped define the modern corporation. At the same time, he is a gutsy boss who has forged a unique philosophy and an operating system that relies on a "boundary-less" sharing of ideas, an intense focus on people, and an informal, give-and-take style that makes bureaucracy the enemy.

In anecdotal detail and with self-effacing humor, Jack Welch gives us the people who shaped his life (most notably his mother) and the big hits and the big misses that characterized his career. Starting at GE in 1960 as an engineer earning $10,500, Jack learned the need for "getting out of the pile" when his first raise was the same as everyone else's. He stayed out of the corporate bureaucracy while running a $2 billion collection of GE businesses - in a sweater and blue jeans - out of a Hilton in Pittsfield, Massachusetts.

After avoiding GE's Fairfield, Connecticut headquarters for years, Jack was eventually summoned by then-Chairman Reg Jones, who was planning his succession. There ensued one of the most painful parts of his career - Jack's dark-horse struggle, filled with political tension, to make it to the CEO's chair. A hug from Reg confirmed Jack was the new boss - and started the GE transformation. The riveting story of his last year - the elaborate process of selecting a successor and the attempt to buy Honeywell - is also told in compelling detail.

This is classic Jack Welch: down to earth, powerful, and filled with common sense.

"As a self-portrait of one of America's most successful modern business leaders, Jack is remarkable for its candor." ( Ther Economist)

What listeners say about Jack

The audio of this book is terrible...very annoying to listen to. I was expecting a higher quality then an old radio.

A fascinating insight into the mindset and career of one of the most influential and successful business people that ever was. I found this book extremely valuable because it opened by eyes to the private sector corporate world after spending much of my life as a Naval Officer. Truly inspirational. Buy it.

However it sounds like it was read down an old fashioned telephone line. Shame as the narrator and story was excellent.

An inside look into what made Jack tick and his approach to achieving success. Thoroughly recommend.

A great insight into the usual unknown

Great listen and fascinating insight into how leaders operate. One wonders if Jack really retired!

wish I had read this when it came out.

couldn't stop listening. read with passion by the narrator. made me believe I was listening to Jack himself.

Finished within a Week

I'm very busy but having my first audiobook has allowed me to get back into reading and finish the book in just a week. It's nice to be able to read again.
The book keeps you interested and anyone with a slight interest in business will be hooked. The narrator captures Jack's passion perfectly and is very good.
The one way that this audiobook could be better is if the chapters were fixed. The digital options for the chapters don't line up with those in the recordings.

I do not usually read or listed to the autobiographies, but this one is good. Worth your time. performance is great.

Loved this book, thought it was going to be quite corporate heavy, which it is but is told in an inspiring and motivational way. The narrator captures Jack's passion for the GE and the successes he experienced as Chairman.

What a fantastic book !!!

I cannot believe it I got it now. I mean this amazing book. It is full of experience and knowledge to grasp. I think it is a perfect business book Thank you Jack.

With this honest review of his business life -and not only- Jack Welch allows us to see how a truly inspired and determined businessman changed the culture of one of the largest companies in the world.
Well written and beautifuly narrated. A real joy to read (listen).

Jack Welch makes it sound easy, but we all know it is not. However, the listener gets a clear understanding of the handful of management levers that Welch used consistently over the years, in order to build GE into one of the best run companies in the world.

Get it, you won't regret it.

Easy listen. Very interesting character. This books is Jack's auto biography on his life - of which his role as GE's CEO is a prime focus. I love it as its a break from your traditional business books - it doesn't try to be a business book. This is simply Jack telling the stories of his approach to business during various positions in GE. It's not preachy; you have to derive the lessons out of it yourself.

Get only the unabridged. Facinating guy.

Jack's message is clear and consistent: if you want your business to excel, you've got to provide the right culture, hire great people, reward the best employees and always expect more. Of course its not easy, I don't remember hearing that word much in the program. However, Jack provides the blueprint for making it happen; find out what works in your business or industry and duplicate it. Find out what doesn't work and fix it or get rid of it.

This book is full of examples of what worked and what didn't. There are plenty of stories to inspire you to find ways to shake up your business and break down the barriers that limit your company's potential. It's easy to sit back and say these strategies can't work for me. It's much harder to wake up every morning and make them happen.

Listening to this program will be the shortest 14 hours you'll ever spend.

A little substance. But just a little.

There are some truly important and different ideas in this book about managing your career and managing a company. All tied together, however, those moments account for only about an hour of this book. The rest comes across as a self-congratulatory ode to Jack Welch and GE. It gets more than a little old in a hurry.

I wanted know
a.how big companies operate
b.work and life style of CEOs
c.How an employee can grow from shop floor to helm
d.How to build a Company
e.Many more about entrepreneurial skills

This book had answers to all my questions. Great insight.

A great story of how Jack came to lead GE, and how GE changed over the years to improve. If you're looking for the human story of Jack Welch, you'll be listening to a lot of talk about the business in between those moments. If you're looking for the story of Jack Welch, and his insights and lessons learned from running GE, then you really want to listen to this. My impression of GE has changed considerably after listening, and I'm going to dive into learning about Six Sigma after seeing what it has done for GE.
It's not simple to lead a large organization, but I derive some confidence after hearing the stories of the various people at GE that, in my career, by sticking to principles, and staying creative and flexible, that I can go as far as I choose to.
The unabridged is definitely worth the extra time to listen to....

To review some MBA topis, good

If you want to have some ideas of how to create crisis inside your company (six sigma, trainning, flat structure...), this is good example. To follow this guy as a person, no, this is not a good book.

From the early days in Plastics to the Board Room, the book offers a glipse of the internal construct of one of the largest companies and how Jack Welch has made a positive impression. Jack's way of taking complex situations & issues and formulating a straightforward solution & process (leveraging the very talented and capable people Jack surrounded himself with) provides for an education on GE and how it has been so successful over the years. Like similar reviewer commented, Barnicle sounds just like Jack and captivates the listener throughout.

No matter your position or job in business, you will get something out of this book.