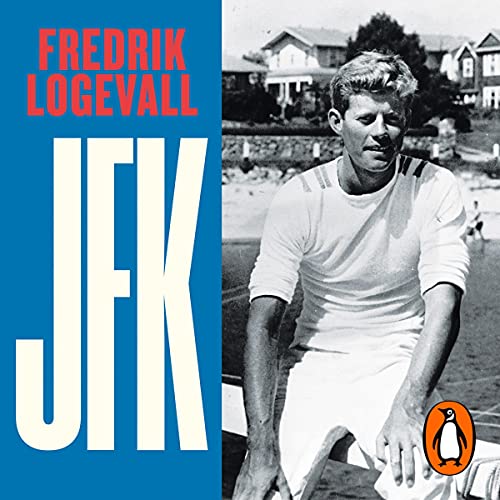 By: Fredrik Logevall
Narrated by: Mark Deakins
Try for £0.00

The Pulitzer Prize-winning historian takes us as close as we have ever been to the real John F. Kennedy in this revelatory biography of the iconic, yet still elusive, 35th president.

By the time of his assassination in 1963, John F. Kennedy stood at the helm of the greatest power the world had ever seen. Born in 1917 to a striving Irish American family that had become one of Boston's wealthiest, Kennedy knew political ambition from an early age, and his meteoric rise to become the youngest elected president cemented his status as one of the most mythologised figures in modern history. And while hagiographic portrayals of his dazzling charisma, reports of his extramarital affairs and disagreements over his political legacy have come and gone in the decades since his untimely death, these accounts all fail to capture the full person.

Beckoned by this gap in our historical knowledge, Harvard Professor Fredrik Logevall has spent much of the last decade combing through material unseen or unused by previous biographers, searching for and piecing together the 'real' John F. Kennedy. The result of this prodigious effort is a sweeping two-volume biography that for the first time properly contextualises Kennedy's role in the international events of the 20th century. This volume spans the first 39 years of JFK's life - from birth through his decision to run for president - to reveal his early relationships, his formative and heroic experiences during World War II, his ideas, his best-selling writings, his political aspirations and the role of his father, wartime ambassador to Britain. In examining these pre-White House years, Logevall shows us a more serious, independently minded Kennedy than we've previously known.

In chronicling Kennedy's extraordinary life and times, with authority and novelistic sensibility, putting the listener in every room where it happened, this landmark work offers the clearest portrait we have of a remarkable figure who still inspires individuals around the world.

What listeners say about JFK

This book is very well written and very easy to listen to.

I cranked the speed up to 3x and it was even better.

Warts and all biography

Lots of information about JFK that I was not aware of. His treatment of Jackie is shocking early in their marriage. Joseph Kennedy gets a more gentle treatment than that old rouge is entitled to. He Author assumes the reader has no knowledge of WW2, so there are superfluous passages explaining the course of the war, that are not always accurate. However, when the book comes to describe Boston politics, McCarthyism, his Senate Race and the failed attempt to get the Democratic Vice Presidential nomination this book goes up several gears. I am looking forward to Volume 2.

Where to begin?, while this biography is very well narrated the content is very very partisan. Logevall is a lauded writer and on this evidence I really struggle to see why, Kennedy comes across as a charming man in many ways but his faults are totally skirted round. A major red flag for me was when his very nicely timed “redeployment” came through after lees than a year in the a pacific theatre of WW2 just as the conflict was entering a more high tempo phase. This sadly was not explored by Logevall who seems to be totally unperturbed by the Kennedy family constantly using there wealth and influence to Jacks full advantage throughout his life.
Having recently finished a biography of George H W Bush I was very surprised to find Bush far higher in my esteem than John Fitzgerald Kennedy.

Very well researched and written. Narration was solid and engaging. Recommended if interested in JFK and the history he lived through. Covers all major historical events of his lifetime. Insightful on his character and person. Family personalities, relationships and upbringing very well contextualised.


This biography is so informative. The portrait of Kennedy is well drawn and his family life and wartime experiences are well told against the background of American politics.

A comprehensive part 1 biography on JFK

Despite being nearly 30 hours long the story zips along nicely. You can tell the author is a JFK supporter, a more critical approach in some sections would be good. Also, he was a great man and I knew he was a womaniser but didn't realise that he was an obsessive womaniser. He never even tried to be faithful to Jackie which I find dad and very disrespectful, completely hypocritical while pretending to be a good Catholic. Not an admirable trait in any person.

I really enjoyed the book but the dreadful narration made the listening experience painful.
The narrator managed to mispronounce almost every French or German word, quite some achievement. He even struggled with English names and places. Very poor indeed.

Excellent book, immense detail and so interesting to learn about this icon of us politics. can't wait for the next instalment.

Epic biography. The degree to which he gets under the skin of JFK, particularly his early years and this volume is almost in addition a biography of Joseph P Kennedy and their ancestors. You really get a sense of who Jack is, in all his genius, his familial sensibilities, his friendships and of course his negatives.

Didn’t want it to finish and can’t wait for volume 2. Brilliantly read.

Great insight into before he was president

Lacking in pronounciation and biography

Terrible pronounciation of French and German names and expressions. Hagiographical on JFK, described as ridicusly superhuman but with some health issues. Good as a semi-fictional experience and background description of American society and its institutions.

Trivia: Shortly after JFK's asassination 60% claimed they voted for him, some years later 65% claimed the same. The true share that voted for JFK was 49%.