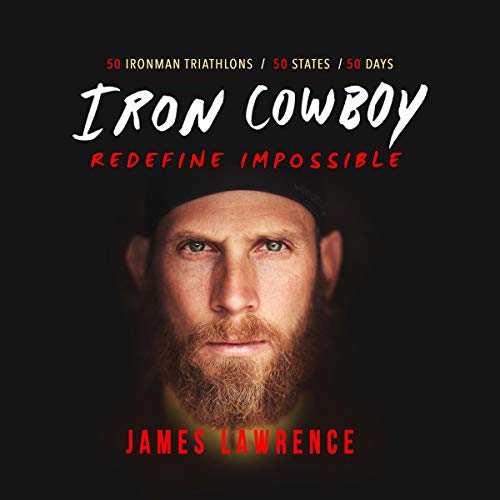 By: James Lawrence
Narrated by: Millian Quinteros
Try for £0.00

Iron Cowboy is an endurance memoir in the tradition of Dean Karnazes’s Ultramarathon Man - a lifetime’s worth of intensely lived experience packed into 20 riveting chapters. Listeners will discover the secret to redefining their own goals and achieving great success. When James Lawrence (aka the Iron Cowboy) announced his plan to complete 50 full-distance triathlons in 50 consecutive days in all 50 states, the only person who believed that he could pull it off was James himself (and his wife, Sunny). An Ironman consists of a 2.4-mile swim, a 112-mile bike ride, and a 26.2-mile run. In Lawrence’s case, he would have to complete those distances and then make it to the next state in time to do it all over again the next day. Even Lawrence’s coach didn’t think he could do it; he penciled in another event the day Lawrence was supposed to complete the challenge.

But with the support of Sunny and their five children in tow, and with grassroots support conjured always at the last minute via Facebook, Lawrence accomplished exactly what he set out to do. Iron Cowboy is the story of Lawrence’s herculean 50-day journey and all the wonderful, miserable, and life-threatening events that happened along the way, as well as a glance at his life leading up to the mission, and winning two prior world records.

Lawrence holds two world records in the Guinness Book of World Records: one for completing 22 half-Ironmans in one year (2010) and one for completing 30 full Ironmans in one year (2012). In 2015, he set a record for completing 50 Ironman distances in 50 states in 50 days. Through social media and press, Lawrence was able to find fans in each state - anywhere from three to 500 people - to complete some of the Ironman alongside him, and supporters were invited to join him for the Iron Cowboy 5k (the last 3.1 miles of James’s marathon); for his last Ironman in his home state of Utah, more than 3,500 people showed up. Along the way, Lawrence survived tropical storms, internal bleeding, hypothermia, hyperthermia, dehydration, nerve damage, infected foot blisters, a blood-clot scare, extreme sleep deprivation (he only got four to five hours of sleep each night), and a bike crash!

This is awful. How can anyone listen to this man who sounds like a computer...

Absolutely loved the book, the iron cowboy is so inspiring but I think James should of narrated the book, that’s the only bad thing.

I can’t listen to this terrible robot narration. What a disappointment. Why not just use a human being?

Very interesting telling of the trials and tribulations of one man's extreme challenge. Go Iron Cowboy!!!

I can't give an honest review of the book because I couldn't get through it. I'm sure the book is fantastic it's just the narration was a little like listening to a computer program reading, I just couldn't listen to it. I'll get the physical copy and read it myself

Great story but the narration is terrible. This is a great reminder that I should first hear the sample narration in Audible before purchase.

A great story should be presented properly.
The narration used was computer-generated. Its like listening to a male first-generation Siri.

The story is awesome. Great inspiration. But the narrator is easily the worst I’ve ever listened to in 85+ audiobooks.

As much as I love why you did what you did and the reason that drove you. I must say that this book sounded more like “poor me and why me and me me me meeeeeee”……Story telling us more the “why I said and because she said” ugggg super painful to listen to the narrator as well.
The book was a good try but in reality it was an epic fail.

Narrator sounds like a robot. Couldn't get past the first few sentences. I'd love to listen to this book but can't stand the sound of the narrators voice.

there's no way that the story was this boring. seems to not be told well.

Not the right narrator

I'm never one to write bad reviews but I feel it must be said that the narration doesn't match the power of the story. James is one of the most incredible and inspiring athletes of our millennium. His journey has without a doubt changed my life and the lives of anyone who hears it or was apart of it. When I hear James speak on podcasts and other interviews I get fired up & teary. I simply didn't get much of that feeling from this narration. I don't mean to take anything away from Millian as he has a nice voice and doesn't have poor narration skills it just doesn't fit the tone of the story. I felt bored listening to this book and am struggling to finish it. I want to hear James narrate his mental & physical pain and suffering first hand. Its so much more powerful that way.

I really enjoyed it very inspiring. Would recommend to anyone trying to do a endurance race in the future

I really enjoyed The Iron Cowboy story, and I hope he continues to push himself to the next level. Highly recommend to anyone

I did not enjoy the AI narrator it made for a much less enjoyable listen.