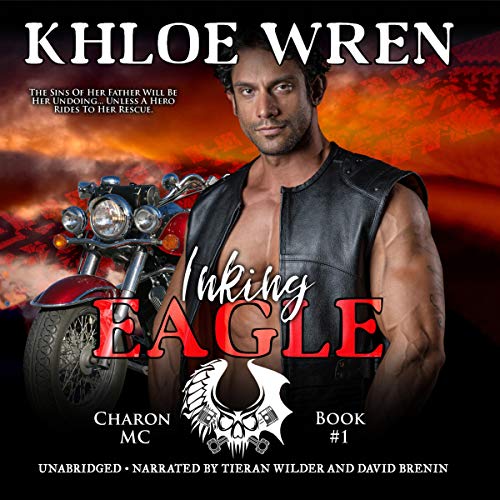 By: Khloe Wren
Narrated by: Tieran Wilder,David Brenin
Try for £0.00

The sins of her father will be her undoing...unless a hero rides to her rescue.

As the 15th anniversary of the 9/11 attacks nears, Silk struggles to avoid all reminders of the day she was orphaned. She’s working hard in her tattoo shop, Silky Ink, and working even harder to keep her eyes and her hands off her bodyguard, Eagle. She’d love to forget her sorrows in his strong arms.

But Eagle is a prospect in the Charon MC, and her uncle is the VP. As a Daughter of the Club, she’s off limits to the former Marine. But not for long. As soon as he patches in, he intends to claim Silk for his old lady. He’ll wear her ink, and she’ll wear his patch.

Too late, they learn that Silk’s father had dark secrets, ones that have lived beyond his grave. When demons from the past come for Silk, Eagle will need all the skills he learned in the Marines to get his woman back safe, and keep her that way.

What listeners say about Inking Eagle

The story doesn't seem too bad but couldn't finish it because the female narrator's "accent" is horrible and she's supposed to be portraying a young girl but sounds like she's 60.. Totally put off

This is the first of the Charon MC Series (and the other three books are well worth reading/listening as well)
Good Story line, well narrated, real feel of biker culture but sensual in places and very definitely steamy…… if your fantasy is true alpha males who treat their women like queens…. Then this is for you…..
Very definitely 18+ audience and not for the faint hearted…..

A really exciting story, MC club and to people who want each other so bad it hurts but rules stop them from being together, but when Eagle’s girl is threatened he pulled out all the stops. Does he win his prize, read to find out

I found this book entertaining was a good storyline and interesting characters. Great performance really did enhance the experience for me.

Not read/listened to anything by this author before. Found this book, as part of a series I think?? It was included in my membership.

The story was well written and had lots going on to make it interesting. The characters were interesting and had good depth and backstory. The main two characters had excellent chemistry and very hot sex scenes.
I really do have to agree with other reviewers though, the female narrator did have an older sounding voice. It did fit with the male narrator quite well, but for supposedly younger characters, they did both sound a bit too old. However, they both did a good job and narrated the story well.

I really want to listen to the other characters books now. 2 more of those are also included.

A decently crafted and interesting book.

great read but a little too much sex lol. never thought I'd hear myself say such a thing lol 😀

Love the story and I enjoyed listening to the different characters come to life in the story.

The female narrator was hard to listen to.

The female narrator almost made me stop listening. Her accent was constantly changing and her delivery was overly dramatic. Her voice brought to mind the image of a character in an old mob movie; complete, at times, with a raspy tone that only comes from too many years of smoking and hard drinking. She sounded much older than the character was supposed to be.

Could not handle the female narrator.

Difficult to listen to. the female narration is confusing. Could not tell the age of the characters. Very difficult!

I can’t say if the whole story is good or bad because I couldn’t get past the awful accent they gave the NY woman. I’m sorry but the narrator,s interpretation of accents is juvenile. Even the Aussie accent.

Woman’s voice sounds to old and like she’s smokes 3 packs of cigarettes a day.

His voice doesn’t fit well for the part and has a few dub overs that are annoying. Probably won’t finish the series.

could have been a great listen

The female narrator killed this series for me in the first go of it, you can tell she's way older than the character and it's not a fit when you can't fake it. It kills the entire narration.
I'm not really to sure of the story line either, I did finish the first book, but it was tough follow, most likely because of Tieran, but David did well.

The storyline was great and unique. The male narrator was really great and saved the terrible choice of the female narrator. Her accent was wretched. She sounded so much older than the story alluded to. Bums me out because I want to hear the other books, but I just can’t.

The storyline is good. The female narrator (Tieran) made it hard to complete. Her voice came across too old for the main female character. The multiple accents she used took away from the story as the same character may have 2 or more accents in one section of the story.

I loved the book itself and I wish I could continue the series but I just can't get past the female voice. she sounds like a 60 year old smoker, not a young blonde woman. the male vocal is okay but a bit nasal for my taste. if the other books didn't have the same female, I would totally continue.

female voice to definitely not the right selection for the young blonde from Boston in Texas.. overall decent cute story

Fairly typical storyline with a bunch of sex in it. Tieran's voice didn't fit Silk, but it wasn't bad enough to stop listening. the age and cigarette-worn factors of her voice were not silky at all. However, it was ok.