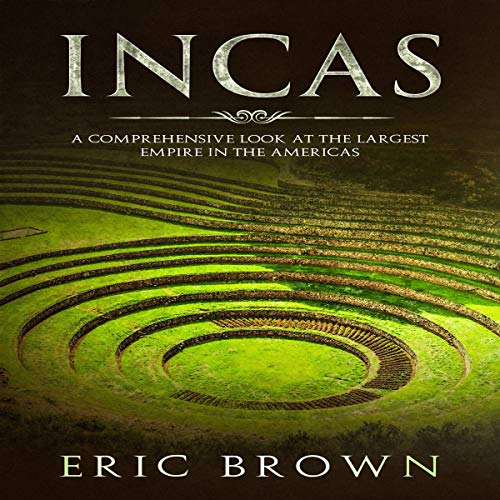 Incas: A Comprehensive Look at the Largest Empire in the Americas

Discover the largest empire in the Americas!

Have you always wanted to learn about the great Inca Empire, but your schoolteachers refuse to listen? Are you confused between Inca, Aztec, and Maya? Do you want to learn how the Inca people were unique from their Mesoamerican predecessors? Could you even draw the Inca Empire on a map?

All this and more lies within Incas: A Comprehensive Look at the Largest Empire in the Americas.

Their history is a relatively short but vibrant and dynamic story with an ending so tragic, your favorite fantasy author couldn’t have come up with it himself. So little is taught of the native cultures of the Western Hemisphere in schools today, as curriculums lean on the exploits of Rome and Britain.

From its founding in the 1300s, the Inca Empire lasted roughly 12 generations. In just that time, it accomplished what other civilizations took centuries to achieve. Learn about the effective expansionist policy of the Inca and how they maximized profits by leaning on clever marketing tactics instead of war.

Learn how downfall came at the hands of the Spanish conquerors, who came with guns and steel and plague. Like the meteor that killed the dinosaurs, the invaders were an extinction-level event for which the Inca had no way of preparing. See how unmatched they were in strategy, technology, and how their far superior numbers meant nothing in the end.

Learn what remains of their great civilization, what influence they had over the following course of history, and see how they even had an effect on the soda you drink....

Inside, you will find:

So click "Buy Now" and begin your journey into the past. By the time you’ve finished, you’ll be booking that trip to Machu Picchu you’ve always wanted. And what’s more, you will be going armed with knowledge and respect of the great people who built the city and who once ruled the mountains like gods.

Don’t wait another moment to enjoy from this information - get your copy of Incas right away!

What listeners say about Incas: A Comprehensive Look at the Largest Empire in the Americas

I think this was done with computer software, it doesn’t sound fluent or real. Content is ok but won’t set hearts on fire.

The intro advertises itself as educating you enough to "school you teachers." Besides the fact that this is a little over 90 minutes long, appealing to the reader's ego is never a good sign.

I got this book to compliment stuff I got from the Grear Courses, and I recommend you skip this and go straight to them, as I only finished this so I could review it.

There's a cartoonish attempt to paint the Incas in the best of light, and the Europeans in the worst of light, to suit modern anti-colonial and anti-religious agendas.

Early settlements are referred to as "peaceful" and "pristine" and untainted by the outside world. Fact is we know near zilch about them, and by the time we do we found they have been interacting and fighting neighbors for some time.

The Spanish are called "diseased" even before the book mentions they inadvertently brought European germs, and actually suffered just as heavily from native germs. The Inca royalty to not get any derogatory titles in spite being inbred and fat.

The book has all the praises for Inca military methods, and insists that Spanish victory was solely due to technology. But there's a problem: the Inca practiced empire building by extorting towns and conscripting their help while avoiding actual fighting. The Spanish practiced empire building by extorting money and conscripting locals into helping them without a fight. Seriously, what's the difference? Besides the Spanish victory?

The Crusades did NOT initiate the gunpowder revolution.

Most of the Conquistadors and Reconquista campaigns were NOT religiously motivated.

Book makes no effort to explain the reasons behind why the Spanish took the ransom but killed the king.

The list goes on, but just screw this author and everything he stands for.