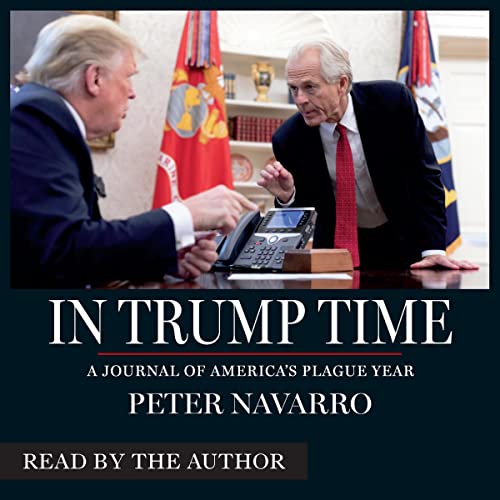 Read by the author, In Trump Time is the definitive insider’s account of America’s plague year in the Trump White House. This innovative audio presentation features the voices of numerous other people appearing in the book, from Corey Lewandowski, Steve Bannon, and Dr. Steven Hatfill to Anthony Fauci and President Trump himself.

In Trump Time unmasks Fauci's deadly actions, provides stunning “Green Bay Sweep” clarity to the violence of January 6, lays bare the facts about the 2020 presidential election and its aftermath, and reveals what really happened at a Communist Chinese bioweapons lab in Wuhan.

This riveting, must-hear account comes from the top Trump advisor who first sounded the China pandemic alarm and who played an instrumental role delivering a vaccine and PPE to the American people in one of our darkest hours.

Peter Navarro is one of only three White House officials by the president's side from the 2016 campaign to the end of the president's first term. Always moving in Trump time as was his signature, Dr. Navarro played a pivotal role in the rapid development of both vaccines and therapeutics like Remdesivir. As Defense Production Act policy coordinator, Navarro was at the center of ramping up domestic production of critically needed personal protective equipment while helping President Trump insure that every American who needed a ventilator had a ventilator. This compelling audio presentation races along delivering new revelations in every chapter.

What listeners say about In Trump Time

Explosive peak under the cover of Government

Many things become clear:-
1. The elected government has no wish to do more than hoodwink the people that anything of substance is done for the good of the people. All talk no action like Rand Paul.
2. Power struggles are corporate battles over the soul of America so lobbyist corruption wins or treason surfaces. Who does your government work for? Hint, who did they work for last?
3. Medical mafia are so strong that even Peter skirts who signed off all the measures that made Bio-Weapon attacks on the world so easy and 3 letter agency betrayal to enable it.
4. Knowing the outcome of the various treatments to regain normality, Peter still pushes bad treatment, bad conclusion on why we are still trapped here and what to do about it?
Throughly entertaining style otherwise as part of your 80/20 rule of truth vs fiction to source the highest quality of the truth!

Recommend a must to read if you really want to know the truth about what happened to President Trump. How the President survived the barrage of condemnation and the obstacles of what he endured is a testament to the character of an amazing man. Easy listening and easy to follow thanks to Peter and the continuity of how the book was written.

Dr. Navarro is one of a kind!

Great book, well worth it

The opening salvo of an epic tale in our history

It's these type of historical memoirs that we'll be used to teach our children once the evil doers are brought to justice. This book is an excellent read/listen and will take you right into the rooms where key decisions were made, along with the hubris shown at the time by those we now know meant to do us harm. Peter Navarro is one of the good guys, thank God He prompted you to keep a diary.

I hope every American listens and reads the story told here.
trump was good for america and the world -

Loved it. The style, the delivery and the honest content hiding nothing., exposing the real truth of trump time.

That's all the world needs. The Truth. Thank you Peter for all your efforts and dedication from all of humanity and through all of history.

Navarro's account of 2020 in the White House is essential reading/listening. It may not be the last word on the subject and a lot of what he says has to be verified but a lot of circumstantial evidence would seem to be accumulating.

5 Stars And Here's Why

First, the content is a must listen. The reading is by Peter Navarro, himself. The recording has clips from external sources peppered through out. The clips make this more entertaining. I Like the way Peter uses prose. I like the clever way he writes. Peter Navarro is able to give a unique view into the operations of the White House during this historic pandemic. If I could give it 4.5 instead of 5 I probably would ... there's always room for improvement you know. In any case, I plan to review the recording on my substack in more detail. I suggest the recording over the written for entertainment ... but I have the book and there are copious references in the print edition that I don't see with the audiobook here. To conclude, the recording is worth the full price. I hope you find this review helpful.

Before buying this book I recommend you look up Peter Navarro's reputation.
Navarro tells us he the smartest man in the room.
The most truthful thing he states is his name. He is disliked equally by Republicans and Democrats.
Just wanted to add that now it looks like this creep will go to jail!

Finally, an accurate, blow by blow account of the poignant facts concerning the war with evil and communist demagogues. Navarro dispels the fiction of the libelous press with in concert from the slimy swamp's conspiracies, God's light from above reveals the truth through Dr Navarro as he tells the real story. God Bless these United States.

Thank you for your diary & writing this book about our greatest modern day President.

Mr. Navarro puts you in the room and let’s you see not only the inner working of government appointees, but also why Trump was making many statements based on information he was being given. Pretty amazing individual, Mr. Navarro, and was best, most knowledgeable staff member the President had. If only he had a bigger role earlier in his administration!

I have been a audible customer for a very long time- and have endured COUNTLESS negative Trump books by second third and fourth hand accounts- Negative Trump genre has become JUST BORING- Same Same Same only written by different authors.
I have truly enjoyed this first hand account. The journal style of going day by day of all the events taking place was an inside view- Mr. Navarro writes in a clear concise and detailed style-

Because it is different, I found it interesting, well written and engaging. And what makes it the most refreshing is allowing me to come to my own conclusions instead of being FORCED to come to a conclusion filtered through bias.

It is well passed time to put a lid on all the BORING anti Trump B S- Trust readers.

I recommend In Trump Time for a variety of reasons-

I am so glad I got this book. I finished it in two or three days, and enjoyed every minute. Having Dr. Navarro narrate was a fantastic decision. I also loved the various clips that were used from other people. The behind-the-scenes information was fascinating, as well as the diary entries.
Members of the war room posse will not be disappointed.

Written with interest and power!

Thanks Peter, you brought us in the room, a thoughtful and detailed account. A must read for MAGA! God bless DJT and God bless the USA!

Fauci lied, people died. Tony must be held accountable along with everyone else that conspired against the people.