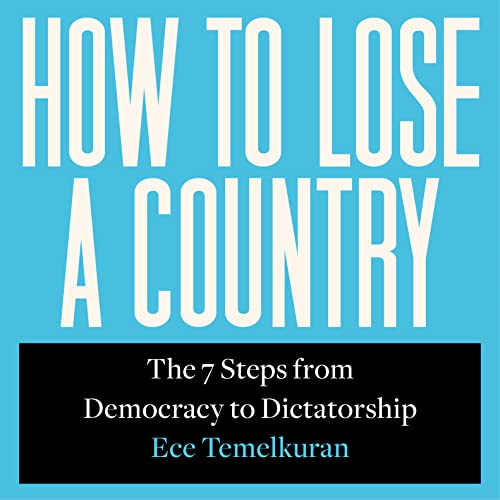 How to Lose a Country

An urgent call to action from one of Europe’s most well-regarded political thinkers. How to Lose a Country: The Seven Warning Signs of Rising Populism is a field guide to spotting the insidious patterns and mechanisms of the populist wave sweeping the globe - before it’s too late.

Ece Temelkuran heard reasonable people in Britain say it the night of the Brexit vote.

She heard reasonable people in America say it the night Trump’s election was soundtracked by chants of ‘build that wall’.

She heard reasonable people in Turkey say it as Erdoğan rigged elections, rebuilt the economy around cronyism and labelled his opposition as terrorists.

How to Lose a Country is an impassioned plea, a warning to the world that populism and nationalism don’t march fully formed into government; they creep. Award-winning author and journalist Ece Temelkuran identifies the early warning signs of this phenomenon sprouting up across the world, from Eastern Europe to South America, in order to define a global pattern and arm the listener with the tools to root it out.

Proposing alternative, global answers to the pressing - and too often paralysing - political questions of our time, Temelkuran explores the insidious idea of ‘real people’, the infantilisation of language and debate, the way laughter can prove a false friend, and the dangers of underestimating one’s opponent. She weaves memoir, history and clear-sighted argument into an urgent and eloquent defence of democracy.

No longer can the reasonable comfort themselves with ‘it couldn’t happen here’. It is happening. And soon it may be too late.

"A brilliant analysis of how democracy can be starved to death. It's one of the most important books anyone could read at the moment, when public institutions are slowly being corrupted wherever we look." (Philip Pullman)

"Temelkuran, a treasure of a novelist, turns a nonfiction eye to the burning topic of today: populism. Vivid, visionary, terrifyingly familiar, How to Lose a Country is essential reading for everyone on planet Earth." (Andrew Sean Greer, Pulitzer Prize winning author of Less)

What listeners say about How to Lose a Country

I really want to listen to this book but the author narrating the English version was a terrible idea. I regularly mishear what is said because of his accent to the point where I find it can't follow it.

A must-read to understand today's politics.

I am a reader of Ece Temelkuran since her first articles started to appear on the newspapers, approximately 25 years ago. I always admired her journalist side and loved her style in her artices, hence I was a bit heart broken when she turned her face towards the literature. With this book, despite she tells one of the very sad aspects of our lives, I feel the warmth of being understood and being reflected: I am an astrophysicist, living in abroad in the last 10 years and struggling to find my home, appalling with the same question again and again "is this my country? This cannot be my country.".

This book is not about how we, Turks, lost our country. This book is about populist politics taking over the world. Hence it is about Turkey, as much as its is about the States, United Kingdom and many other countries.
If you want to have a better, clearer, deeper and a wider understanding of what the heck is happening in the world politics, I strongly suggest you to read this book.

If you're a fan of the author you can listen it from the audible but my hypothesis on authors and poets being the murderers of their own children when they attempt to give a voice to them, still holds its grounds. So beware.

the author draws from experience and recent history to take a step back and inform us as events unfold, of the dangers of populism and dictatorship... very balanced and insightful!

A must read or listen to!

by far the best political book of the last decade. shows how "it couldn't happen here" lures people everywhere while it does happen in US, UK, Hungary, Poland and elsewhere as it did in Turkey.
An what a great writer! witty, knowledgeable, empathetic and fierce. I loved all of it!

Sadly too close to how UK politics since 2014

So difficult to listen to

I really want to listen to this book. I’ve read great reviews about it and I’ve tried several times to listen but I find the authors accent so difficult to follow at length. I find that I’m spending so much time concentrating on catching each word that I’m not absorbing the information which is so frustrating. I’ve ended up buying the paperback so I can read it because I know this is going to be a very important read. Such a shame that I can’t listen to the audiobook while I work.

A must-read if think "it cannot happen here"

A well-written tale of how turkey shifted to totalitarianism with spot-on parallels with current events.
brilliant and heartbreaking storytelling..
can't recommend enough

The author is an educated, intelligent woman. She's an experienced journalist and has written an important book about an important subject - the rise of populism & the impact on Turkey. Her anger comes across strongly throughout the book and of course when she's talking about what is happening to her country she is right to be very angry indeed.

The problem is she doesn't stop with Turkey and she doesn't stop with the facts. She has strong opinions about a range of issues...including Brexit, and Trump. When she's presenting her opinions there is no space allowed for alternative interpretations & it's all filtered through a thoroughly middle class lens. I'm no fan of Brexit but the idea that the 6th largest economy in the world is too small to be an independent country is just nuts. I would never vote for Trump but I suspect that a steel worker in Pennsylvania (for example) might see the decision differently. It would be very logical for him to vote for Trump because of the impact of Democrat policies on his job, they weren't all drawn in by Trump's obvious sexism & racism.

So it's an interesting listen but ultimately flawed. A little more editing & journalist balance would have led to a much stronger case. As it stands the book is only going to convince those who are already fully signed up to the middle class liberal consensus.