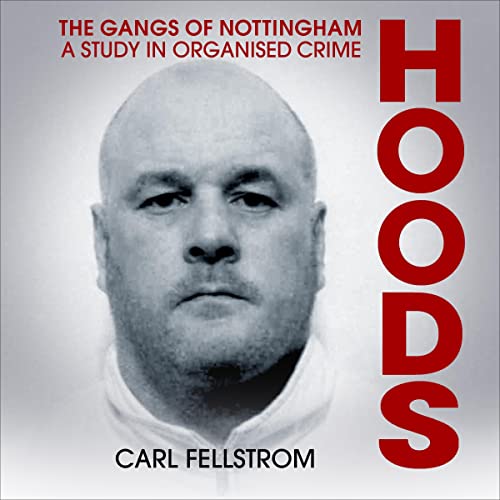 By: Carl Fellstrom
Narrated by: Dudley Thomas
Try for £0.00

In 2004, the murder of a middle-aged couple in their village bungalow lifted the lid on the great untold story of British organized crime. The slaughter of Joan and John Stirland revealed an evil empire of powerful ganglords, contract killings, and police corruption. At its dark heart was the East Midlands city of Nottingham.

A prosperous centre of business, education, and leisure, Nottingham had fallen under the shadow of vicious gangsters. Eventually its police were investigating so many murders that their boss had to appeal to other forces for help, and the influx of drugs and weapons saw the city labelled "Gun Capital UK".

Hoods traces the roots of the gangs, revealing how economic dislocation and the clash of cultures between working-class white residents and black immigrants from the 1950s onwards created an alienated underclass. In the 1990s, a more malignant breed of organized criminal emerged. Crime families who had been involved in armed robbery, protection rackets and extortion now sought to control the recreational drugs trade and forged links across Europe to import wholesale quantities of cocaine, ecstasy, and amphetamines. By 2002, shootings were running at one a week.

Hoods uncovers how outlaw Yardies pioneered the sale of crack cocaine and imported the ruthless violence of the Jamaican ghettos; how young black gangs from the so-called NG Triangle of the Meadows, St Ann’s and Radford areas clashed in a series of turf wars; how the shadowy Dawes Cartel built a lucrative international drugs empire; and how the Bestwood Cartel and its terrifying leader, Colin Gunn, corrupted police officers and left dead and maimed in its wake. As local police struggled to cope with the mayhem, MI5 and the National Crime Squad launched a massive undercover investigation into the Nottingham "untouchables". It led ultimately to the dismantling of some of the UK’s most powerful crime networks. Hoods is a stark account of what happens when the rule of the gun supplants the rule of law and fear stalks the streets.

What listeners say about Hoods

Read the book instead

only telling half the story, read the book it's self very disappointed after having read the book . it's mist alot more about the hoods