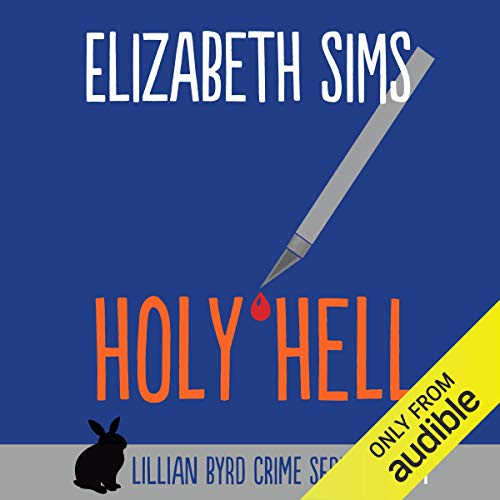 By: Elizabeth Sims
Narrated by: Dina Pearlman
Try for £0.00

Lillian Byrd is a small-time reporter with a flair for making big-time mistakes - like getting fired for fending off the boss' son with an X-Acto knife and breaking up with her girlfriend for no good reason. So her investigation into the disappearances of women in the Detroit area might not be the best idea. But when one of the missing women turns up dead and Lillian recognizes the bizarrely mutilated corpse, she's in too deep to get out. Of course it doesn't help that she's still fighting off the boss' son and ducking the aggressively amorous overtures of the roughest dyke in town. Now, after simultaneously blowing the case for the police and revealing herself to the off-kilter killers, she's completely on her own. Can she catch the murderers before they catch up with her?

What listeners say about Holy Hell

I loved this book. The story was as whacky as the synopsis suggests. I was looking for something light and this was perfect. Light and funny yet grimly dark at times too. The narration by Dina P is the cherry on this cake, she adds even more character to the already very colourful people and story. No one could say that the characters are two dimensional, Sims writes with quite a flare. I laughed at times and I was shocked at times. Don't take this book too seriously and you will enjoy it too.
It's also great to see more lesbian representation. I look forward to reading the next books in the series.

Dina Pearlman narration of this story is first class she has caught the characters and keeps the action moving.

My first of this series and by Elizabeth Sims very much an old style crime caper with strong characters and a page turning story.

I didn't get too far into the book, only because its not really my kind of story. I went on the title and was expecting some kind of cult type shocker 😆. Its a good book if you like the genre so do give it a try.
I really thought the narrator was excellent - they were animated enough to keep me absorbed in the story, while at the same time bringing forth the dry humour of the character. I really liked the way they managed to pull off that old 50s style private eye feel to a modern story.

I think I've listened to this book before but it is still really good. The characters are well decribed and the narration is very good too.

the narrator voice made the book hard work, the story line heard a 1000 times

Not a bad story but red flags kept coming up. “Can you guess what happens next” sadly yes I could.

Just not for me.

I found the characters to be somewhat cliche and the plot a little far fetched, unless journos are allowed way more scope in the US

A twisty mystery with a super loveable heroine


I really enjoyed this first book in the series. Can’t wait to listen to the rest. The mystery has lots of twists and turns; and Lillian Byrd is that imperfect, yet perfect underdog heroine I love to root for. The narrator did an excellent job of capturing exactly how I’d expect Lillian to sound. The story is crisp and unpredictable. In addition to the story being a really great mystery, I laughed out loud lots. I highly recommend this series.

Although I quickly fell in love (and laughter) with Lillian, I found the story itself to be rambling and unbelievable. And that's just sad because I've known women like her and liked them quite a bit.
Here though, Lillian should have been a bit smarter and the sequences more believable. All and all though I laughed out loud at times and found this book to be enjoyable.

I have a new hero and a new favorite narrator! This book had me laughing one minute and scared for the main characters the next. Excellent writing by Elizabeth Sims and Dina Pearlman does an excellent job narrating! SO worth the read!

I enjoyed the story and the characters. It was easy to listen to and follow.

I can't get passed the first five minuets

The way this is read is just not for me
Can't get through the first 5 minutes
Will possibly try at a different date
Rating the story 5 stars, just due to the fact I'm not going to poorly review the story if I haven't read it.

Light, fun character but could be so much better

I loved that the story revolves around a lesbian main character and her lovely bunny. There are things to love, including the complex back story and details. The realistic comments on gay culture. But, the main character makes such ridiculous decisions. Without giving too much away, she does a long and time consuming tour of a location with no exits rather than see what is to be seen and run for help. Nobody when faced with that room would act in that way. I hoped this was just a start of the kind of silliness, but it continues through the series. So, what could be a fantastic series keeps injecting ridiculous and usually unnecessary decisions that pull the reader from the story.

Pleasant surprise! Lilly is a brilliant, real woman, funny, gay, well-groomed, and my new best friend. Elizabeth Sims jump right into the story the man that gets stabbed in the first chapter is not the victim. As soon as she entered her apartment she took off her bra and looked for Todd.

Love the character Lillian and her fabulously interesting personality. Listen just a little and you’ll be hooked.

Sometimes over the top

This book was sometimes so over the top that I talked at it and said, “you’ve got to be kidding!” But other times, I just laughed. It is well done, even if the villains were a little cartoony and stereotypes. The humor and unfolding of the mystery really carried the book and made it super enjoyable. I’m looking forward to hearing more of the series.

This is the introductory book for the Lillian Byrd Crime Series. I LOVED it. Great job, Elizabeth Sims! You have me hooked. So, much so, I also bought your book, “You’ve Got A Writer In You.” Just got that today, by the way.

To be honest, I did not read this book. I did download it from KindleUnlimited (KU) with the intention to do so, but was more than pleasantly surprised to find that it came with a free audiobook version. So, my wife and I listened to this via Audible while we were in the car tooling around town or on the road for a camping trip. In fact, we finished this book several weeks ago and are now on our third installment of the Lillian Byrd Crime Series. I realized today that I was doing a disservice to everyone for not having gotten a review out sooner.

First off, this book was FUNNY! Funny, I tell you. Lillian gets herself into some crazy situations. Several times, we’d have to pause the audiobook to simply laugh out loud.

In addition to funny scenes, Elizabeth Sims provides brilliant descriptions of the world around Lillian and the crazy, but insightful things that go through Lillian’s mind. Each character is vivid. Each scene is vivid. In addition to funny, there’s a mystery here. It’s gritty and macabre. And taken together, it all makes for an excellent book. I enjoyed it so much. Incredibly entertaining.

Now, let me focus on the narration of the audiobook for a moment. This book is narrated by Dina Pearlman. She is absolutely brilliant. Her inflection, and the way she would laugh as she read would make me just light up with a smile. I am a fast fan of hers. She could read the dictionary, and she would have me captivated and under her spell. Bravo, Dina Pearlman. I am SO pleased that the two of you have teamed up for this series. I look forward to the next one and the next one.

Do yourself a favor and read this, or listen to it. Either way, I don’t think you’ll regret it.