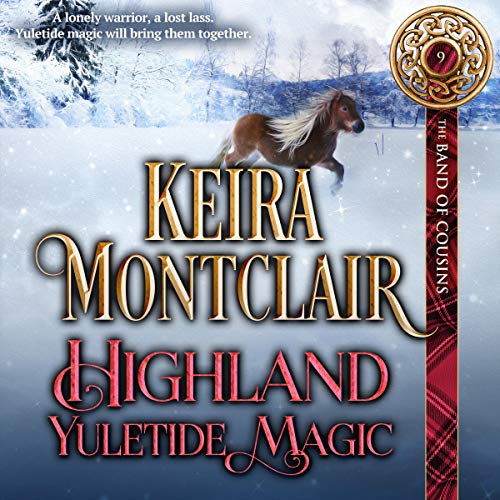 Paddy the Pony brings Yuletide Magic to Muir Castle in this heartwarming novella.

When Moray Allen is left in charge of Muir Castle the fortnight before Yule, he doesn't anticipate any excitement. The excitement is all down south, where the Grant and Ramsay cousins are embroiled in their final battle with the Channel of Dubh, smugglers who trade in human cargo. But the chieftain hasn’t been gone for more than a day when Moray spots a golden-haired lass in the wilds surrounding Castle Muir. He suspects she’s lost and in need of food, but she runs from him. Meanwhile, the chieftain’s son, Steenie, is preparing for Yule with his beloved pet, Paddy, who seems to have his own plans for the holiday - plans that involve the mysterious stranger.

Although Shona escaped the Channel of Dubh with her brother and three other bairns, she knows they’re not safe. Their food supply has run out and winter weather is settling in across the Highlands, seeping into the cave they're using for shelter. To protect herself and the others, Shona must place her faith in someone, although she’s hesitant to trust any man, even the handsome Highlander she keeps seeing.

Moray and Shona are both in need of a little Yuletide magic. Who better to help them than Paddy the Pony?

The Band of Cousins is a great Series 😀..

I have enjoyed all the stories with regards to the Bands of Cousins. This is one of my Favourite Highland series and well worth getting if you like Highland Romances!!!..

This was short and sweet. Left me feeling warm inside. Loved the fact that Paddy was able to show his magic during yuletide and Shona and the other children were saved.

Good Story for a Great Saga

A Different Tale of the continuing families adventures brought to life by a creative artist.

Too short but just right. I wanted there to be more as it was as per her other books good plot, characters multifaceted and narrator who did not rush... but, it was the right length for a novella.

what a fun story!

A great way to wrap up the Band of Cousins! Paddy makes a great " Yuletide Angel 😇"

The story captured me from the beginning, but all of Keira Montclair books do. I so enjoyed Paul Woodson’s voice as he conveyed the story, pulled my imagination further into the Highlands!

I loved the touch of mystery and magic in this book. I love that she brought back so many of her characters to be part of this book. I couldn’t put this book down.

keira is the best!!

I absolutely loved this book. Paddy the Pony is definitely magical. Keira really knows how to bring the characters to life. And Paul Woodson is the best narrator I've ever listened to. Thanks Keira for another great listen.