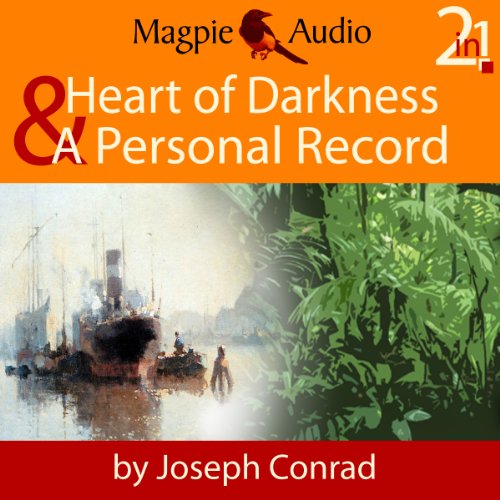 Heart of Darkness and A Personal Record

By: Joseph Conrad
Narrated by: Greg Wagland
Try for £0.00

This audiobook comprises two works: Joseph Conrad's Heart of Darkness and his autobiographical A Personal Record.

The opening of Heart of Darkness finds Charles Marlow in fading light on the Thames Estuary, as he and his companions relax on deck, waiting for the turn of the tide. He tells of the time he turned 'freshwater sailor' on the River Congo, of his perilous journey upriver in a little steamboat with a band of white colonialists and a group of cannibals that takes him closer to the coveted ivory, closer to Kurtz the rogue agent, closer to certain unspeakable rites and the heart of darkness. Serialised in three parts in 1899, Heart of Darkness was first published in 1902.

A Personal Record is a 'fragment of biography', an autobiographical work by Joseph Conrad, published in 1912. It has also been published under the title Some Reminiscences. It is a masterpiece of atmospheric writing and the main contemporary source to detail his early life. Conrad, Polish by birth, who goes on to become one of the greatest novelists of the English language, describes his childhood and adolescence, discusses his forebears, one of whom fought on the side of Napoleon and ate a Lithuanian dog, the exile of his parents, the death of his mother and his relationship with Uncle Tadeusz..

Thereafter Conrad beautifully interweaves the tales of why he went to sea and how he came to be a writer. Its digressive structure is precisely what makes it a magical and timeless work about exile, destiny and art.

What listeners say about Heart of Darkness and A Personal Record