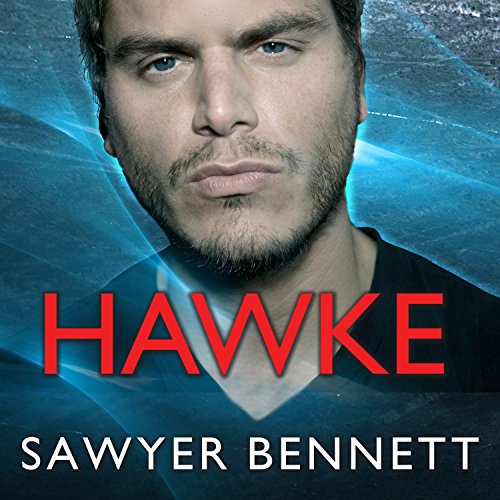 By: Sawyer Bennett
Narrated by: Cris Dukehart,Graham Halstead
Try for £0.00

Off the ice, elite defenseman Hawke Therrien enjoys his fair share of booze and good times. And why shouldn't he? He's worked his way up from the minor leagues and made himself a star. The only thing Hawke misses from that life is the pierced, tattooed free spirit who broke his heart without so much as an explanation. She's almost unrecognizable when she walks back into his life seven years later, except for the look in her eyes that feels like a punch to the gut.

Vale Campbell isn't the same girl she was at 20. As crazy as she had been about Hawke, her reckless behavior and out-of-control drinking had started to scare her. She had to clean up her act, and that never would have happened with Hawke around. Cutting him loose was the hardest thing Vale ever had to do - until now. Because she's still crazy about Hawke, and if he could ever learn to forgive her, they just might have a future together.

What listeners say about Hawke

Dear Sawyer Bennett - "NO" means "NO"

I was enjoying this book, right up until our "hero" Hawke pressures Vale into a sexual situation she does not want. Vale clearly says "no" out loud multiple times and Hawke keeps pushing. Vale physically moves Hawke's hands away to stop him, and yet he pushes and pushes and pushes her into an ever more sexual situation. The reader knows that Vale is conflicted, but what she is telling Hawke is a big fat NO and yet he still doesn't respect her refusal. Vale was not teasing; she wasn't inviting his touch. She was saying "no." I have huge problem with this in any character, but especially the "hero" of a romance. Even the most alpha of males needs to understand that No means No. The chapter was resolved and everyone was fine, but it was too late for me. I am done with this book. I can't root for a man like that. I will try Sawyer Bennett again, but only if her heroes show more respect to the women they claim to love.

Trials and Tribulations of a very immature hockey couple

This was probably the weakest of this series so far. It was hard to get invested in their story because they were both so immature and reckless when younger, and 7 years later little had changed. Hawke was so juvenile and self absorbed it was hard to have much sympathy when he whined about being hurt. His response for disappointment is not to persevere or work through issues be to find the nearest bottle to get drunk. Vail also behaved very immaturely, continually reacting before thinking and being ruled by emotions in a negative way and never did communicate her concerns, anger, and annoyance verbally. Running seems to be her response. Both thought nothing about using others and seems to not give much in return. Maybe they both needed more discipline as children as both were clearly over indulged and spoiled. Vail’s father was only marginally interesting and the character was not very well developed Not a promising future if they don’t learn to really communicate and by the end you are left not really caring if you see this couple again. Not going to continue with this series unless the remaining end up in the Romance Package because this one would not be worth the credit and not willing to take a chance on others. Too bad because the previous on Ryker was good.

This was my least fave of the series. The connection wasn't real for me not like the last books. Skip this one if you can and save your credit.

I wasn’t pleased with this story. Not because of that ‘no means no’ stuff (that wasn’t as bad as the reviews I read before going into the book made it out to be) but because the characters were so lacking. There was no meat in the story, no connection, nothing of any depth. Loved this series so far and will probably finish it completely, hope this book isn’t the downward turn. Fingers crossed.

These characters were so unappealing and childish. They held grudges, didn't communicate, and then when the truth comes out, it was a disappointment, too. Why the secretiveness if not for the sake of fake drama? Even when they started to talk, Vale continued to keep secrets from Hawke. Her forgiveness meant nothing without complete honesty.

Even disliking the characters, I was prepared to give a higher rating until the scene when Hawke's sometime-lover Michelle arrived unexpectedly and met Vale. His reaction was more about making Michelle feel comfortable and welcome than being concerned about Vale -- particularly after when they'd just shared -- and he totally lost my sympathy. It was already iffy after his reaction to Vale's confession about their past. And her reaction after all his selfishness? To give him a pass. In fact, she continued to let him off the hook and give him a pass through the rest of the book, and I was done. Didn't care about them and don't believe in their HEA.

The narrator's performances were good. Not great, but I attribute that to the material they had to work with. Overall, the book was a total let-down, and I'm mostly disinterested in continuing with the series.

Not much plot here and I didn't really like either of the leads. It's definitely the weakest of the Cold Fury series to this point.

Also, I didn't care for the Graham Halstead's voice. He's a competent narrator but didn't do the characters any favors.

Hawke is a part of the Cold Fury storyline and is book five in the series. As with each of the other books, this can be read without reading the other books in the series, but be aware that you may have spoilers about other teammates. I really enjoyed the voices of the narrating duo as they are able to really get into the characters and bring them to life. For me, this story was more of a second chance romance. Hawke and Vale were serious back before he was drafted and the night before leaving she breaks it off. Now seven years later, they end up both with the Cold Fury team. Hawke is still hurt over the sudden break up so will they be able to get along?

Several things in this book took me by surprise. I kept guessing as to what happened all those years ago and things were not what I expected and then there were even a few more unexpected twists in the plot. I also enjoyed having a few glimpses into the prior teammates and what was going on in their lives. I personally would have enjoyed even more than a glimpse of these players. They are like a big family and the author makes you want to be able to keep in touch with them as the become like friends. I’m looking forward to book six in the series which is also narrated by the same duo.

A true second chance at rebuilding a lost love. Their feelings for each other never completely went away, but the hurt that Vale put on Hawke left it's mark. Vale herself was harboring a bit of resentment but not just for Hawke, for the choices she made. Their attempt at putting it behind them will be tested.
I am enjoying the narrators of the series and like that they have remained the same. Both Cris Dukehart and Graham Halstead have done a great job so far.

Least favorite of the series so far. Not sure if I was just not invested in these characters (they were brand new) or if it was their immaturity! Vale was the worse the two, very reactive. I am ready for Max's story though