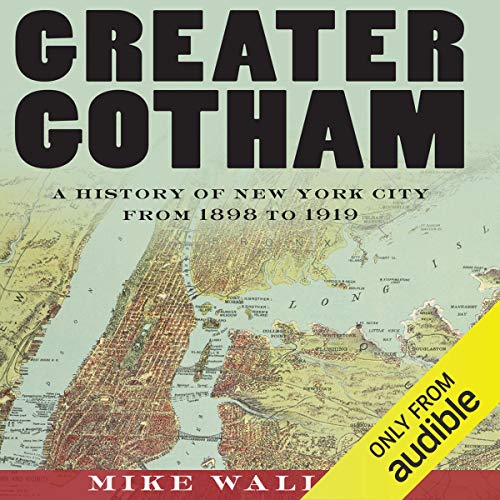 By: Mike Wallace
Narrated by: Victor Bevine
Try for £0.00

In this utterly immersive volume, Mike Wallace captures the swings of prosperity and downturn, from the 1898 skyscraper-driven boom to the Bankers' Panic of 1907, the labor upheaval, and violent repression during and after the First World War. Here is New York on a whole new scale, moving from national to global prominence - an urban dynamo driven by restless ambition, boundless energy, immigrant dreams, and Wall Street greed.

Within the first two decades of the 20th century, a newly consolidated New York grew exponentially. The city exploded into the air, with skyscrapers jostling for prominence, and dove deep into the bedrock where massive underground networks of subways, water pipes, and electrical conduits sprawled beneath the city to serve a surging population of New Yorkers from all walks of life. New York was transformed in these two decades as the world's second-largest city and now its financial capital, thriving and sustained by the city's seemingly unlimited potential.

What listeners say about Greater Gotham

A terrific book, especially for anyone interested in either (a) NYC history and/or (b) the US during the "Gilded Age." Wallace has a slight tendency to go into more detail than is necessary, with long lists of the members of the Board of Directors of various corporations, the various founders of this or that benevolent society, etc., which is the only thing keeping this from being, for me, a 5-star treat. The story of New York City in these years is almost beyond comprehension - it goes from being a large and important city at the end of the 19th century to the capital of world finance, industry, commerce, musical entertainment, movie-making, manufacturing, . . . by 1919. Astonishing.

Exactly the Sequel to Gotham Anyone Could Hope For

Mike Wallace’s does an amazing job breaking down the complexity of turn-of-the-century New York into digestible sections. It’s exactly the sequel I was hoping for, after loving Gotham. And as always, Victor Bevine does fantastic job narrating—making the 50+ hours fly by. Overall it brings the time period to life in a way nothing else has for me.

New York City the best and the worst of all of us!

This book tells the story of New York City up and until 1919. Who knew that so much of today’s politics and problems are with us today are from that time period. Great book

OK but not awesome.

This was interesting but nowhere near as good as the original Gotham. It was more of series of small stories than a regular book.