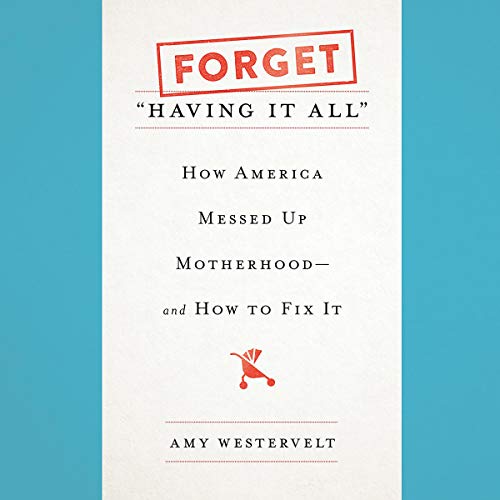 Forget "Having It All"

A clear-eyed look at the history of American ideas about motherhood, how those ideas have impacted all women (whether they have kids or not), and how to fix the inequality that exists as a result.

After filing a story only two hours after giving birth, and then getting straight back to full-time work the next morning, journalist Amy Westervelt had a revelation: America might claim to revere motherhood, but it treats women who have children like crap. From inadequate maternity leave to gender-based double standards, emotional labor to the "motherhood penalty" wage gap, racist devaluing of some mothers and overvaluing of others, and our tendency to consider women's value only in terms of their reproductive capacity, Westervelt became determined to understand how we got here and how the promise of "having it all" ever even became a thing when it was so far from reality for American women.

In Forget "Having It All", Westervelt traces the roots of our modern expectations of mothers and motherhood back to extremist ideas held by the first Puritans who attempted to colonize America and examines how those ideals shifted - or didn't - through every generation since. Using this historical backdrop, Westervelt draws out what we should replicate from our past (bringing back home economics, for example, this time with an emphasis on gender-balanced labor in the home), and what we must begin anew as we overhaul American motherhood (including taking a more intersectional view of motherhood, thinking deeply about the ways in which capitalism influences our views on reproduction, and incorporating working fathers into discussions about work-life balance).

In looking for inspiration elsewhere in the world, Westervelt turned not to Scandinavia, where every work-life balance story inevitably ends up, but to Japan where politicians, in an increasingly desperate effort to increase the country's birth rates (sound familiar?), tried to apply Scandinavian-style policies atop a capitalist democracy not unlike America's, only to find that policy can't do much in the absence of cultural shift. Ultimately, Westervelt presents a measured, historically rooted and research-backed call for workplace policies, cultural norms, and personal attitudes about motherhood that will radically improve the lives of not just working moms but all Americans.

What listeners say about Forget "Having It All"

A Thorough and Well-Researched Book on The "Mom Predicament"

A few years back, I was simultaneously trying to hold on to my career, and be the primary caretaker for my 3y/o daughter.

I quickly found that while a single income couldn't sustain our household, the childcare costs needed for us both to work ended eating up most of my income. I was basically working to pay to not see my child.

So, I stayed home.

And if that wasn't enough, for the times when I *was* working, I was finding myself doing most of the physical and mental labor of raising a child *on top of* my paid job (this being the proverbial "second shift").

It was totally draining, and frankly, confusing. Women were supposed to be able to "have it all", right?

Then I had a pivotal moment. I read (author) Amy Westervelt's 2016 HuffPo article "Having It All Kinda Sucks", and suddenly it clicked. "Having it all" really meant "trying to have it all within the boundaries of a patriarchal society" - one that had no mandatory parental leave policy and no childcare assistance to allow for women to rejoin the workforce. It also dictated that women work while still taking on the brunt of the childcare duties.

Which brings me to this book.

Amy has painstakingly laid out how historically, US policy has been working against the working mom, and how it continues to do so today. She explores our unrealistic expectations of mothers throughout to the decades, and how those expectations have jettisoned into the realm of "crazy" today. She talks about how "having it all" today means fitting within a framework where competition and individual success are wrongfully valued above caring and cooperation.

Most importantly though, in this book, Amy offers practical suggestions and viable solutions for fixing our current system.

Also notably, as a white women, she explores both the history and solutions through an intersectional lens, to the degree that a white women can.

This is by far one of my favorite books, and I highly recommend it to anyone; not just those who want an accurate assessment of why working moms are so stressed today, but those who want to find out how to make this country a better, stronger, more balanced place for everyone.

Required reading for all parents

The Herstory I Never Learned in School

Information packed, this book took me a while to finish, but I'm glad I did. We may not all agree on what motherhood and fatherhood should look like, but many can agree what we are doing today isn't working well for most. This book helped me understand how we got to the present and why our assumptions about work and home and so many other life experiences need not be the only way. If enough people, not just women, but men too, read this book, we can work together to understand one another and innovate a world where both work life and home life are better for all.

We can’t expect men to take on a more active role in our families when we set up situations where they can’t. Amy’s book is well-written and researched. One of my biggest pet peeves and something that can be so easily remedied, as she discusses in her book, is to put changing stations in men’s restrooms. This is just one of the hundreds of examples that we (both men and women) don’t do ourselves any favors. We have a long way to go, but some of these things are low-hanging fruit that we can start implementing today and would have ripple effects for years to come.