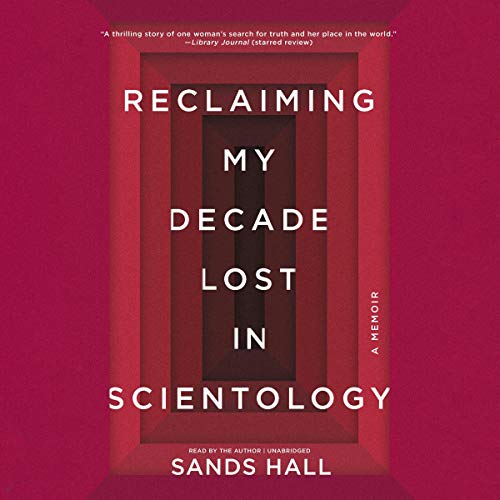 Reclaiming My Decade Lost in Scientology

In this audiobook, Sands Hall chronicles her slow yet willing absorption into the Church of Scientology. Her time in the Church, the 1980s, includes the secretive illness and death of its founder, L. Ron Hubbard, and the ascension of David Miscavige. Hall compellingly reveals what drew her into the religion - what she found intriguing and useful - and how she came to confront its darker sides.

As a young woman from a literary family striving to forge her own way as an artist, Hall ricochets between the worlds of Shakespeare, avant-garde theater, and soap opera, until her brilliant elder brother, playwright Oakley Hall III, falls from a bridge and suffers permanent brain damage. In the secluded canyons of Hollywood, she finds herself increasingly drawn toward the certainty that Scientology appears to offer.

In this candid and nuanced memoir, Hall recounts her spiritual and artistic journey with a visceral affection for language, delighting in the way words can create a shared world. However, as Hall begins to grasp how purposefully Hubbard has created the unique language of Scientology - in the process isolating and indoctrinating its practitioners - she confronts how language can also be used as a tool of authoritarianism.

Hall is a captivating guide, and this audiobook explores how she has found meaning and purpose within that decade that for so long she thought of as lost; how she has faced the "flunk" represented by those years, and has embraced a way to "start" anew.

What listeners say about Reclaiming My Decade Lost in Scientology

This story is told in a way that gives a level headed look at scientology. The author is not attempting to create scandal or expose, she is relating her journey.
I myself am not religious and I am interested in how people get in to these sorts of things, I appreciated the authors candid account of how she got in to scientology.
As for the delivery of the content, the authors voice is not at all jarring and the audio book was an easy listen thanks to that.

loved the book which gives a very good description of what it is like to be part of a place that calls themselves a church.

Perhaps my favorite performance on Audible to date, and the material itself is very engaging. An enriching account of mistakes made and lessons learned, although the last section drags

Enjoyed this book and how it was written. Interesting insight in to Scientology too. As a Christian I pray you would find the truth of the gospel Ms Hall.

Great story, narrated really well. I Just wished she wouldn't sing, it really grated on me.

This book is dull and overcomplicated. The author has clearly the aspirations to write but in the process she leaves the reader uninvolved and even bored. Consequently, she doesnt do a very good job at either entertaining or enlightening the reader, even though her writing skills are above avarage. i have read many book about scientology, and although written in a simple language and with an easy structure, they were much more involving. This book jumps between past and present, which kills my interest. Additionally, from the very beginning of the book, she focuses for ages on the boring details of scientology rules, keeping the pace disappointingly stagnant.

Misleading title for a dull story

I gave this book six hours before deciding it was too boring to finish. It's not even that much about Scientology; perhaps the title was chosen because of the interest today in the group. Hall writes well and reads well, but her life is not that interesting and I really disliked the opportunities she found to sing. Her parents were particularly annoying. I have read numerous moving stories of people searching for meaning and spiritual understanding. This isn't one of them. As the Scientologists would say: Flunk.

Not really about Scientology

The title and description of the book are deceiving. This is more a full-life autobiography; Scientology pops up only every great once in a while. Hall speaks more about her early life, her familial dealings, her lovers, her ambitions, etc. than she actually does about her experience in the organization. She's even more interested in singing her folk songs than describing any courses she'd taken or auditing she'd completed. I had never heard of Hall (or her family members) and would not have bought this book if I'd known what it was really about.

I kept thinking this book would be a great after Scientology memoir but it was really a long, boring journey to nowhere. I forced myself to finish hoping it would eventually become entertaining, but it didn’t.

Many books are entertaining, amusing, and informative. This book is that and so much more. When I finished listening, I had a gift in my hands, a greater understanding of my own journey. I am grateful to Sands Hall for her honest, horrendous wrestling with what she calls her wasted years in Scientology in order to bring her story into the world. Hall, who is also an actress, reads her own work, and her physical voice is the perfect vehicle for her written words. All told, an amazing audible book experience.

I was a Scientologist for over 30 years. I have been "out" but "under the radar " for 9 years. This book helped me to better understand how I came to be trapped in a cult. It also helped me to peel off a few more of the layers of Scientology control that still exist in my mind. Thank you, Sands.

Not Quite What Was Expected

It was...interesting, in its way. I found the constant shifting between backstories and characters to be confusing at times, and the subtle self-promotions inserted throughout began to illicit some eye-rolling on my part after the third or fourth one.
Still, it was important to hear another take on the ludicrousness of Scientology, albeit more lukewarm than I felt it should have been, but Sands did challenge my objectivity several many times.

This brave memoir helps all of us to explore the many factors that affect our lives. With keen insight and emotional resonance Ms. Hall encourages us all to examine how we become who we are. Her beautiful narration adds immeasurably to the enjoyment. I highly recommend this!

Excellent exploration of the author’s experiences, touching on deep themes such as the need to find meaning in one’s life. Enjoyed the narration and sprinkling of song. Well done!

It explains the warning signs of cults and families. It presented my experience as a former Mormon with similar characteristics.

I m so glad that you published this book. Scientology has always been mysterious to me. I don’t know what it teaches, whether it is a religion or a life style. Your book answer all the questions and I really enjoy listening to your voice and the way you tell story. A decade is not wasted for you in fact I think you have acquired so much wisdom during these years at Scientology that many of us still don’t know what region we want to be in. At least you know Scientology is not for you! Life we spent on earth is to experience and not the end result that matters. So no matter what kind of experience you encounter as long as that experience touches your inner soul and that I think is a life not wasted.