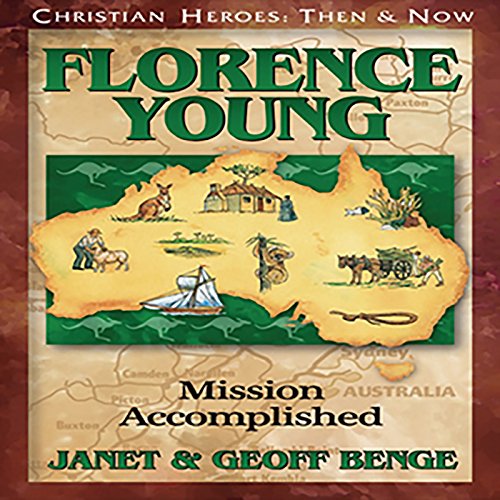 By: Janet Benge,Geoff Benge
Narrated by: Rebecca Gallagher
Try for £0.00

A rip current overturned the whaleboat with eight Kanaka Christians aboard. Only three of the men could swim, and the others clung to the upturned boat. Sharks circled the three as they struggled to get to shore. The three survived, but the others could not be found.

When Florence heard the news, she resolved to go on despite the dangers. Once timid and unsure of her own salvation, New Zealander Florence Young rose to her calling and became a fearless and faithful witness for Jesus Christ. Eventually serving in the remote Solomon Islands and, for a season, in China during the deadly Boxer Rebellion, Florence began her service close to home. This one woman's mission to the Solomon Islanders, or Kanakas, working on her family's Australian plantation soon expanded to their home islands. There, as Florence and others helped Kanaka believers reach out to villages steeped in cannibalism and revenge killings, thousands of people were transformed by the love of God. (1856-1940)

This best-selling missionary biography series - Christian Heroes: Then & Now - chronicles the exciting, challenging, and deeply touching true stories of ordinary men and women whose trust in God accomplished extraordinary exploits for his kingdom and glory.

A missionary who was bendable to God's call

Florence Young was quite impressive. Not only, did she start reaching the Kanakas in Australia; but when it looked like that mission field was closing she became a missionary to China. She constantly had her ear pointed towards Heaven to hear where God wanted her next. This was probably one of my favorite missionary stories as Florence broke the mold, several times. Oh, can't reach the Kanakas for the time being? Well, God says to go to China. China's door closes temporarily but the Kanaka door is opening again; back to Australia. I have no words. It makes me think that I need to keep my ears pointed towards Heaven too. I don't want to miss God's next adventure! Mary

Florence Young could have lived a life of privilege, But after a woman prayed that she would be a blessing to all she met, she overcame her shyness, and worked in the China Inland Ministry with Hudson Taylor, and started a thriving ministry among men from the southeast islands. She risked her life to go into an area where the locals were not above taking a missionary’s life. This was a great read.

I love to read stories of those who have given their lives to preach the gospel and to serve others in difficult situations. It gives a call to all of us!!


Slow start but needed in order to paint the picture of humility and ordinary. The adventurous life Florence Young lived was not at all easy but very satisfying and glorifying to God.