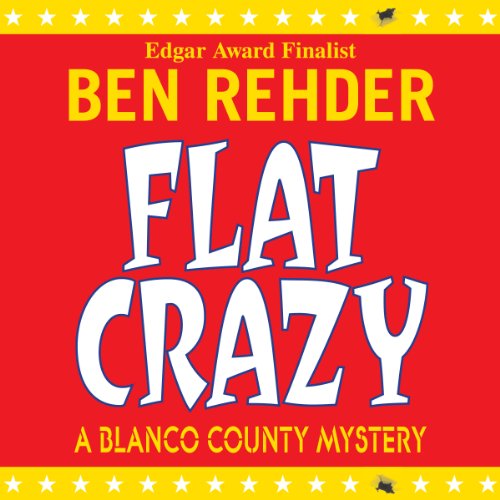 By: Ben Rehder
Narrated by: Robert King Ross
Try for £0.00

An unidentified wild creature is on the loose in Blanco County, and, over the protests of game warden John Marlin, the locals have convinced themselves they're dealing with a mythical vampirish beast called a chupacabra. It doesn't help Marlin's cause when a dead body turns up with a fang-like wound in its neck. Then things really get out of hand: tabloid news programs invade Blanco, good old boys Red O'Brien and Billy Don Craddock develop a cockamamie get-rich-quick scheme involving the animal, and everyone is a little surprised at the booming population of voluptuous Chinese dwarves who've turned up in town. If anyone can make sense of the strange events, it's John Marlin, who's well-versed in the intricacies of small-town life, Texas style. But can he do it before another body turns up?

What listeners say about Flat Crazy

Loved it. Another adventure of John Marlin. Another good one. So easy to listen to. Good narrator.

If you love a great funny thriller , then this book if for you. I am so glad I have started to books by Ben Rehder.

Robert King Ross is a great narrator , and makes the book even better.

Great plot surprises and suspenseful action., Very funny and believable characters, I found myself wanting to keep listening to see what John does next.

So many murders and crimes in this book that my head was spinning! Watching as the craziness of this town tried to solve these mysteries was fun and the way they all wrapped up in the end was just right. I’m really liking this series so far and will be listening to more in the future.

I didn’t recognise John Marlon in this story, this narrator made him and Garza sound more like Mafia than a game warden and police officer, infact, several characters sounded like mafia.
The narration may not have been to my liking but it was a good story, some funny sections in this book look out for the adult movie bits, the names are hilarious.
Red and Billy Don’s antics as always are always good for a chuckle.
Highly enjoyable story, I would recommend.

The third in the series, this audiobook sums up the series so far, crazy!!! I just love this series. I've listened to the first three and this was the funniest!! Can crazy get more crazy, oh yes!!

Fun narrator, perfect for the audiobook

I received this audiobook, as a request by me, for an honest review good or bad

This is a fun mystery. I think this is the weakest story in the series so far mainly because the story jumped around so much that I found it hard to follow and keep all the side characters straight. The main ones however still remain strong and interesting and I can't think of another series quite like this one. Where else are you going to listen to a story that contains porn stars and a chupacabra? The story has a number of twists that keep it interesting (as long as you keep them straight) and I am looking forward to starting the next book.
There have been a number of sightings of wild animals in Blanco County and it is game warden John Marlin's job to get to the bottom of it. When a body with fang-like marks in his neck is found it brings out all the hunters in the area trying to bag a new animal for there wall and reporters trying to bag the story of a life time. John isn't sure which is worse. He just knows he has to stop the madness before someone else gets hurt. The Chupacabra isn't the only animal roaming around. Is someone trafficking in wild animals for hunters to snag? Are they getting lose and the reason for the sighting? John and the sheriff Garza are on the trail until someone takes a pot shot at them and Garza ends up laid up in the hospital. Can John track down a mythical creature and find a killer on his own? Or will he get some unlike help from poachers Red and Billy Don.
The author changed the narrator again with this book and unfortunately I didn't really take to him, his voice was to deep and he didn't really have much range for all the characters and they tended to sound the same.
I was given this free review copy audiobook at my request and have voluntarily left this review.

Would you consider the audio edition of Flat Crazy to be better than the print version?

No, the narrator just doesn't get the character voices right.

What didn’t you like about Robert King Ross’s performance?

Not much. He has a nice reading voice but his voices for the characters all sounded the same. Billy Don and Red should have very different voices. Ross has them sounding the same. I had to actually listen for the " Red said" part to know who was speaking. Same thing for Marlin and all the others. Everyone sounds pretty much like the same voice.

Like any of the other readers better than this one. Good book, not very good narrator.

Needs to settle on ONE Narrator

I've really been enjoying this series except for the fact that there is a revolving door for narrators. I am NOT enjoying this guy at all. He makes Marlon sound creepy. And then to my dismay, I see that he's narrated most of the rest of the series.

Loved the storyline. looking forward to listening to the next in the series. My only complaint is the change in narrarator. He did well, but it was hard to get into the story because of the change

So many murders and crimes in this book that my head was spinning! Watching as the craziness of this town tried to solve these mysteries was fun and the way they all wrapped up in the end was just right. I’m really liking this series so far and will be listening to more in the future.

The book was actually good and well presented. Would probably be better suited for men. Reminds me of a most the men where I live and the characters are spot on for the way some talk and act. Has just the right amount humor. Being from south Arkansas, most men and some women love their deer hunting! Would recommend it.

Another strong delivery from Rehder combing a solid mystery with humor against a backdrop of small town life in Texas, all while examining important societal issues.

Stands alone, but better as part of the series.

I received this audiobook for free in exchange for a review.

This is the 3rd book in the series following a Wildlife Officer and the various characters he runs into and the mysteries they are involved in.
This is a good Humorous page Turner story that are a Wounderful breakaway from intense books.

Crooks, thieves, and cover ups. The villain sermed to have no conscience at all
It amazed and surprised me that Red and Billy Don had some good in them, and felt the need to help save Marlen. But by the story's end they were back to their old shenanigans again. What an unsatisfying death for the villain - I needed him to suffer more.That was too easy a way out. I voluntarily listened to a free copy of this and am giving an honest review. The narrator did a great job.

All the books in the Blanco County series are uproariously funny. Get them all!