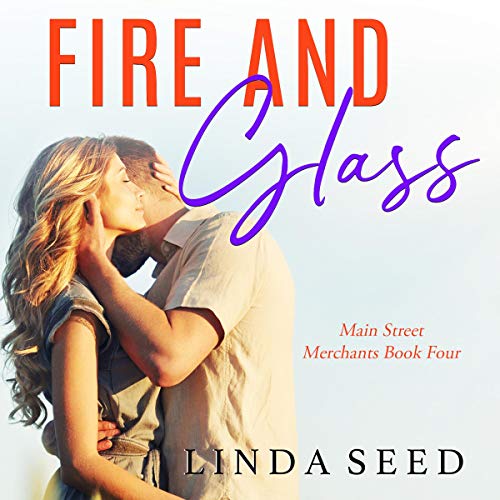 She's engaged to a man with a promising future. But even as she makes plans to say "l do", another man is hoping that she won't....

It wasn't easy for Lacy Jordan to watch her best friends get paired off one by one while she was still single and toiling away at a low-paying job. Maybe that's how she ended up engaged to her mother's chiropractor - a man who looks good on paper but whose stiff manner and controlling ways leave Lacy cold.

When steamy-hot glass artist Daniel Reed rescues Lacy from a dicey situation, she finds herself feeling things for him that she's never felt for another man. But Daniel's reluctance to accept her love - and everything that comes with it - means he's the one who needs an adjustment, before both of their hearts are shattered.

What listeners say about Fire and Glass

Many favorite scenes in this One!

This is the fourth book in this series. It is the first one for me. I enjoyed the storyline and the characters. There were some humorous parts that I couldn’t get enough of. Once the dog comes on the scene the tone of the book changes. It becomes lighter and funnier. My other favorite scenes is when the ladies are discussing how men and ice cream are similar. That just cracked me up. Chunky Monkey or Neapolitan...I hope I can remember this! Seriously this is a favorite moment.

This is my first book by this author. Again I enjoyed her story and the characters. I did listen to this on audio. Avie Paige did a great job. Her scoffing and little additives helped put this story over the top.

Great addition to the series

This is only the second story in this series I have listened to and the second one by this author I have been exposed to, and I must say I have become a fan.
Lacy Jordan and Daniel Reed are wonderful characters that you will fall in love with.
The writing is hilarious , the feelings of both Lacy and Daniel, and the family dynamics the author presents to the reader, are all very real. You feel that Daniel, Lacy and their friends the kind of friends you can sit down and chat, love and at times just want to strangle. Sounds familiar ? :)
Definitely another great addition to this series.

I received a free review copy of this book and am voluntarily leaving a review. I totally enjoyed reading this book. It’s well written and the characters were fantastic. I would suggest this book to my friends that like this sort of genera. this was a good book.

I received this audiobook free at my request and am leaving this review voluntarily.

In Fire and Glass, Linda Seed has penned a wholly believable and realistic love story that will keep listeners enthralled throughout. Avie Paige does a great job with the narration, and with switching voices between characters. There were no eye rolling moments, just many moments of saying to myself, "Yes, I can picture that happening." I will admit, I haven't read/listened to the first 3 volumes in this series, but that in no way lessened my enjoyment of Fire and Glass. I'll have to go back now and catch up!

A very pleasant romance with just enough heat both from the intimacy and from the glass blowing furnace. Who really gets to choose one's mate - the pressure from mom or from fate? It is also fun to see the role that Z, the dog, makes. I really enjoyed this story and hope you will too.

good story overall, narrator did a good job with

this is the first audio book I've listened to that I hadn't read first. I read the first book in the series, so I assumed I would enjoy the story. I just wasn't sure how I would enjoy listening to a brand new (to me) story. I really liked it! I was surprised at how many times I caught myself laughing and smiling at some of it. I wasn't too sure about the narrator at first because lacey's voice was kinda immature sounding, but I got used to it especially when I realized how many other characters there are. there had to be some distinction to the characters to tell the difference. and even doing the male voices didn't seem weird like they sometimes can with a female narrator. overall I recommend this audio book, and the story itself. it felt real, nothing too over the top story-wise, but still interesting enough to hold my attention