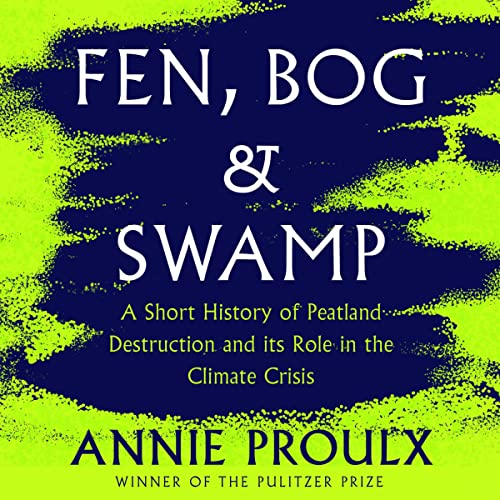 By: Annie Proulx
Narrated by: Gabra Zackman
Try for £0.00

A BBC Radio 4 Book of the Week

From Pulitzer Prize winner Annie Proulx—whose novels are infused with her knowledge and deep concern for the earth—comes an urgent and riveting history of wetlands, their ecological role and how the loss of them threatens the planet.

Fens, bogs, swamps and marine estuaries are the earth’s most desirable and dependable resources, and in four illuminating parts Proulx documents the emergence of their systemic destruction in the pursuit of profit and the consequent release of their stored carbon. Wide-ranging and idiosyncratic, Proulx’s explanation of wetlands takes readers to the fens of sixteenth-century England, Canada’s Hudson Bay Lowlands, Russia’s Great Vasyugan Mire and America’s Okefenokee National Wildlife Refuge and introduces the nineteenth-century explorers who launched the ravaging of the Amazon rainforest.

Proulx was born in the 1930s, a time, as she says, when ‘in the ever-continuing name of progress, Western countries busily raped their own and other countries of minerals, timber, fish and wildlife.’ Fen, Bog and Swamp is both a revelatory history and an urgent plea for wetland reclamation from a writer whose passionate devotion to observing and preserving the environment is on glorious display.

"Talk about seeing the whole world through a single well-chosen window! Annie Proulx is, as ever, remarkable—her mind, her heart and her learning take us on an unforgettable and unflinching tour of past and present, fixed on a subject that could not be more important. A compact classic!" (Bill McKibben)

"So often feared, dredged and drained, swamps, bogs and fens (it turns out) are just as vital to our species’ survival on this planet as healthy forests and oceans—perhaps more so. Proulx has written a moving elegy and cri de coeur for our world’s wetlands. I learned something new—and found something amazing—on every page" (Anthony Doerr, author of All the Light We Cannot See)

"Proulx wants us to see the loss of wetlands—and to appreciate the beauty in these swampy and often stinking places. Boy, does she succeed. The prose is just magnificent, bringing to life hitherto overlooked habitats." (Guardian)

What listeners say about Fen, Bog and Swamp