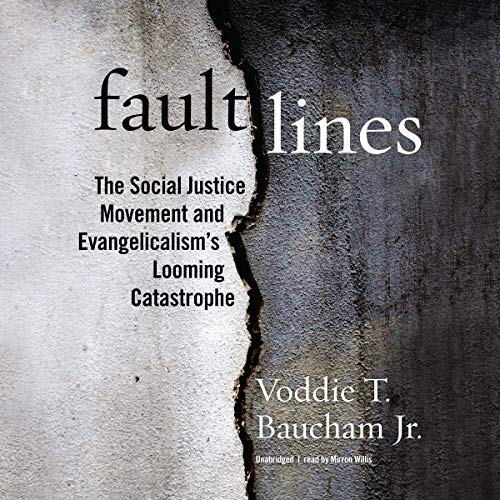 By: Voddie T. Baucham
Narrated by: Mirron Willis
Try for £0.00

We are standing on shaky ground.

As a wave of violent riots protesting the death of a Black man at the hands of police shook the nation in the summer of 2020, most Americans were shocked. Christians nationwide, eager to fulfill their God-given calling to bring peace and reconciliation, took to pulpits and social media in droves to affirm that “Black lives matter” and proclaim that racial justice “is a gospel issue".

But what if those Christians, those ministers, and those powerful ministries don’t know the whole story behind the new movement that’s been making waves in their congregations? Even worse: What if they’ve been duped into adopting a set of ideas that not only don’t align with the kingdom of God, but stand diametrically opposed to it?

In this powerful audiobook, pastor, professor, and leading cultural apologist Voddie Baucham explains the sinister worldview behind the social justice movement and how it has quietly spread like a fault system, not only through our culture, but throughout the evangelical church in America. He also details the devastation it is already wreaking - and what we can do to get back on solid ground before it’s too late.

Whether you’re a layperson who feels like you’ve just woken up in a strange new world and wonder how to engage both sensitively and effectively in the conversation on race, or a pastor who’s wondering how to deal with increasingly polarized factions within your congregation, this audiobook will provide the clarity and understanding you need to either hold your ground, or reclaim it.

What listeners say about Fault Lines

Baucham is attempting to show the anti-Christian/God roots of Critical Race theory for the Church and how their subtle redefining of terms is creating a scenario where critique is silenced. On this if you are prepared to give him a hearing he does well, and the book is of interest to any Christian, particularly as America's madness eventually infects others. The reading is excellent and another narrator who I now know I can listen to with pleasure for hours, an important point as one can't pay attention to what one doesn't like -:)
As a non-trinitarian I'm amused as some of his analysis is precisely the means by which evangelicals have silenced discussion on the whole subject of Trinity using the same means of denying the validity of the objector and subtly demanding that argument takes place in their own prescribed parameters; and of course by funding. So is it just another power shift in institutions who are more controlled by Mammon and its messengers than by actual love of the truth? 'I'm tired of these people who come to do good and stay to do well' (The Wire)

Informative and enjoyable to listen

My only criticism is that I would have liked Voddie to have read the content. The reader of the audio had good pronunciation, but did come across a little robotic, which doesn't engage you as much when delving into a topic of this magnitude. That aside, this was a really good listen. Very informative and most definitely needed to combat the ongoing culture wars we find ourselves in.

Insightful and revealing. An absolute must read-to understand why so many churches are preaching a social and not a Biblical gospel.

A timely call for Christians in this age

Thoroughly researched, evidenced and rooted in the Word of God. Amen.

This is a treasure! Rich in insights!

An incredible book that provides an incredible overview of a battle of ideologies and a fight for The Truth!

Finally some helpful biblical thoughts on the issues of race. It's written for the American scene but has much in way of application in any other setting.

Relevant and important read for our time!

A very well written book on the dangers of CRT, based on Scripture and facts! A very important matter to understand in our day and time.

Great book: Must read for all true Christians

This is a great book with thankfully an excellent narrator to go with it. It has done what it set out to do. To expose the deception of wokeism and most of the -isms that are antithetical to the Gospel of Jesus Christ. God bless you Voddie.

A must listen for evangelicals

This books is necessary. It will be the second most important book you read this year following the Bible.
Something is shifting beneath our feet, whether you have sensed it already or not. This book accurately uses the metaphor of a fault line and earthquakes throughout. This is much of what I have felt over the last few years. Maybe you have felt it too but didn’t have words to label what was happening. Or maybe you do already know something about critical race theory and intersectionality, but you see it as just a tool and you are wondering why some are making such a fuss.
This book will explain all of that and more.
I am so grateful for Brother Voddie for having written this book and made it available through so many mediums. It is well researched and explained and written with lay people in mind.

My only complaint is that Brother Voddie does not read his own books himself. What a voice! No other reader can do it justice as well as an author can do for their own words; and his voice in particular is a favorite to listen to. Much like RC Sproul, when he teaches its like sitting with a favorite uncle as he makes things plain to understand.

Fault Lines is a much-needed read for today’s society. Dr. Baucham systematically dismantles the arguments and opinions of the CRT/CSJ cult movement. He brings statistics, true stories and uses the self-incriminating words and presuppositions of their leaders to bring just condemnation to their agenda. If you have any ability to hear and recognize truth, I will implore you to read (or listen to) this book by Dr. Baucham. As a Christian, I very much appreciate his use of scripture in critical points to invalidate the agenda and his honesty concerning the church’s responsibility in allowing it to manifest over time. The fault lines are not just found in society but within today’s church walls and body.

A thoughtful and biblically sound book on one of the biggest issues the church in America is currently facing. Thank you Dr. Baucham!

A Must Read For Church Members

I was pleased to get some autobiographical content early on in the audio book. I fell in love with Voddie Baucham's Mom in Chapter 1. Baucham is unflinching in his criticism of Social Justice ideology, but maintains a spirit of speaking the truth in love- loving his ideological opponents enough to point out their errors in the light of Scripture without engaging in petty or slanderous attacks. Too bad his opponents have not all followed his example. This book is a must read for anyone interested in the Social Justice movement and its incredible impact on culture in general, and churches specifically. If you are involved in a local church to any extent, it behooves you to be informed on the topic of Social Justice, and to do so with a foundation of Scriptural truth, not as the culture attempts to dictate to us.

The narration by Mirron Willis is excellent. My hearing is not the best, so I greatly appreciate his clear enunciation, despite mispronouncing some words that should have been caught by an editor.

Absolutley Essential Book for our Time

Voddie Baucham expertly, directly, and winsomely exposes the utter bankruptcy of critical theory and its related components in this book. He also humbly and legitimately associates the many, many influential people in evangelicalism who have become adherents and proponents of an ideology that is antithetical to the Gospel of Jesus Christ. I thank God for appointing this brother in the Lord to be able to address this issue in such a powerful way.

A presentation of current state of affairs

This book is an excellent resource to understand how the social justice movement is not a replacement for the Gospel. Baucham’s thoroughness and research has presented a case for all to be aware of the danger looming ahead within the Church.

“Take no part in the unfruitful works of darkness, but instead expose them.” (Ephesians 5:11)

“And the Lord’s servant must not be quarrelsome but kind to everyone, able to teach, patiently enduring evil, correcting his opponents with gentleness. God may perhaps grant then repentance leading to a knowledge of the truth, and they may come to their senses and escape from the snare of the devil, after being captured by him to do his will.” (2 Timothy 2:24-26)

Most Important Book this Millennia

Ministry leaders and laypeople, this book is crucial in guiding through today's polarizing social climate.

Outstanding and Simple review of the data

Baucham has something to say about critical theory, intersectionality, and the secular religion they belong to. And he is no Johnny-come-lately. For decades he has understood the cultural Marxism of the academy. His concern in this book is the church.

Fault Lines, as in the place where tectonic plates intersect, are appearing beneath the feet of church going believers. On one side of the divide are important and respected pastors. On the other side? The same. Who is right?

The book is well written, coherent, and convincing. Baucham names names, and pulls no punches. But he leaves throwing sucker punches. He leaves out invective and pejoratives. He is serious and makes his case. No more, no less.

The narration is just right. The listening never lags.

There is so much depth here, from the author's engaging, inspiring, and insightful life story to his extremely careful arguments about the false religion promoted by critical race theory and also his clear and honest insight about his experience as a black American man, this book is pure gold. This will be one of only 3 or 4 books in my library that will get multiple listens. Every American of every background should read this book.

I am a new fan of Voddie and I feel blessed to have found him. Voddie speaks Gods Truth in Love. Not only is he willing to “talk the talk”... his life exemplifies “walking the walk”. God bless you Pastor Baucham and your beautiful family. I hope to hear you speak in person someday.