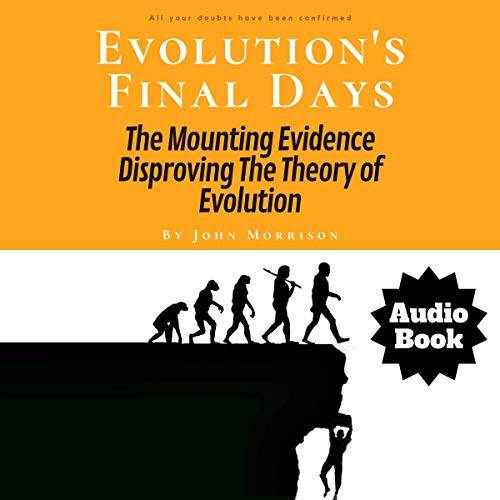 The theory of evolution is in a crisis.

In this ground-breaking book, John Morrison examines the theory of evolution being currently taught in high schools and colleges across the world. This planet was once nothing but liquid and gas and over billions of years, somehow the millions of living organisms currently here on earth came into existence, including humans ultimately descending from apes. Once the currently taught theory is understood, John then proceeds to explain what the textbooks don't teach, putting the theory of evolution in a whole new light.

Once you're done listening to Evolution's Final Days, you'll realize that the theory of evolution could never have happened in the way scientists proclaim, and the many reasons why new theories are not currently being taught. You'll understand why we need to stand up as a community, and fight for science to be taught as it was intended. And you'll come to know why the theory of evolution is truly in its final days!

Whether you're new to the theory of evolution or have your PhD, this book will truly make you question what you've been told, highlighting key information that many have never heard.

As a free bonus, only for book buyers, you'll receive my special report titled "The Top Five World Mysteries". This special report is not available to the public, or anywhere else. It exists solely as a "thank you" to buyers of this book.

Expand your mind and learn what evolutionists don't want you to know. Buy now and start listening to Evolution's Final Days now!

What listeners say about Evolution's Final Days: The Mounting Evidence Disproving the Theory of Evolution

Good, but only a very brief introduction.

First of all the entire book is only an hour to listen to, so it's just a very brief introduction in to some of the topics. Each chapter comes to an end just as you think it is getting started! I think the book is aimed at people who are completely new to the idea that evolution is a theory is crisis, and to that end I think it works well. It would have been good to reference other more detailed works on any of the particular subjects. For example Michael Behe's book Darwin's Black Box.

this book clearly addresses some of the main supposedly evidence for evolution even if you don't have a degree in science you will be able to understand some very good original points good for preparing for a debate on the subjects I enjoyed listening to this twice and took notes.

No religion and unbiased approach to a matter that is greatly important. I really enjoyed this book and recommended to people who have not opened this chapter in their lives

honestly this book is a no non sense look at one of America's biggest problems and worst enemies.

This is useful in acquainting someone with various lines of reasoning they can explore more deeply elsewhere. It reveals problems evolutionary explanations try to gloss over.

It is one of the kind that you wish it would never ends. Simply language, logic, and sciencetifc evidence. It required courage to write such thing during these days.