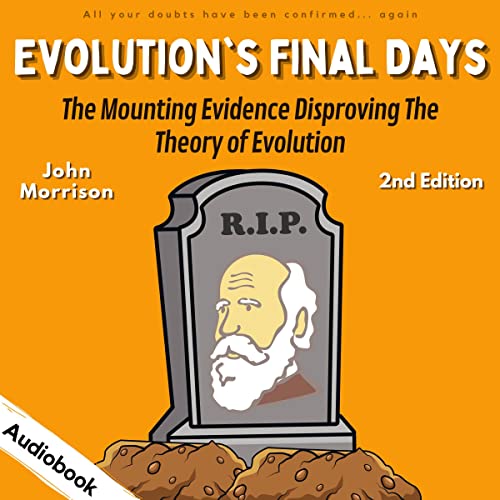 By: John Morrison
Narrated by: Steven Andrews
Try for £0.00

The theory of evolution is in a crisis.

Updated second edition is packed with new proof, new chapters, and includes sources to all information!

In this groundbreaking book, John Morrison examines the theory of evolution currently being taught in high schools and colleges across the world. This planet was once nothing but liquid and gas, but somehow, over billions of years, the countless number of living organisms currently on Earth came into existence. This includes humans descending from apes.

Once the currently taught theory is understood, John then proceeds to explain what the textbooks don't teach, which puts the theory of evolution in a new light. Once you're done listening to Evolution's Final Days, you'll realize that the theory of evolution could never have occurred in the way scientists proclaim, and the many reasons why new theories are not currently being taught. You'll understand why we need to stand up as a community and fight for science to be taught as it was intended. And you'll come to know why the theory of evolution is truly in its final days!

Whether you're new to the theory of evolution or have your PhD, this book will truly make you question what you have been told, and you'll be sure to learn new information you may have never knew existed.

Learn the truth about the theory of evolution.

Nice and concise. Expressing much in few words. Condensed; brief and compact. Includes a lot of important questions.