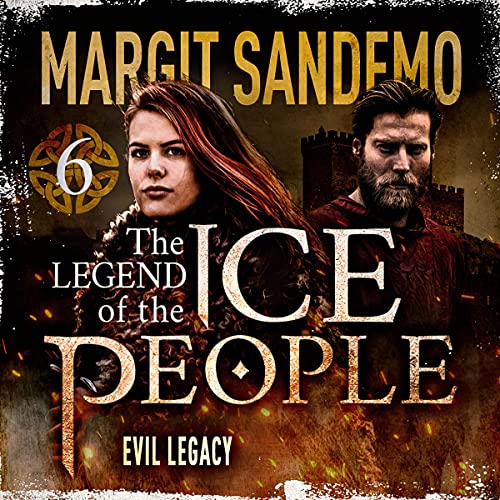 By: Margit Sandemo
Narrated by: Myanna Buring
Try for £0.00

The Legend of the Ice People series has already captivated over 45 million readers across the world.

The story of the Ice People is a moving legend of love and supernatural powers.

Tarjei Lind of the Ice People promised his grandfather Tengel that he would find a worthy heir to their secret recipes. Tarjei decides to give all of this - plants, herbs, potions and recipes - to Mattias, Kolgrim's half-brother. When this news reaches Kolgrim one summer's day in 1633, his evil mind flares up in appalling violence. Cecilie and Alexander Paladin's daughter, Gabriella was born and bred in Denmark together with her twin brother, Tancred. A degrading event forces Gabriella to flee her home and stay with her relatives in Norway and her visit there is of great significance to the entire clan.

Margit Sandemo was born on 23 April 1924 in Norway. She was raised in Sweden but later moved back to Norway. She made her debut as an author in 1964.

Love and supernatural powers are the hallmarks of her authorship, and she is the best-selling author in the Nordic countries, with more than 39 million copies sold.

The Legend of the Ice People comprises 47 volumes.

Margit Sandemo is, simply, quite wonderful.
-- The Guardian

Full of convincing characters, well established in time and place, and enlightening ... will get your eyes popping, and quite possibly groins twitching... these are graphic novels without pictures... I want to know what happens next.
-- The Times

A mixture of myth and legend are interwoven with historical events, this is an imaginative creation that involves the reader from the first page to the last.
-- Historical Novels Review

Loved by the masses, the prolific Margit Sandemo has written over 172 novels to date and is Scandinavia s most widely read author...
-- Scanorama magazine

What listeners say about Evil Legacy

I can never get enough Ice People. There's a reason these books have been so wildly popular across Scandinavia for 40+ years. History, magic, drama, sex & romance - they are a non-guilty pleasure. This one is kind of a book of two halves, the first you have forced child labour in a silver mine, and the second you have a bride to be left at the alter. The reader does a great job with the Scandinavian names.