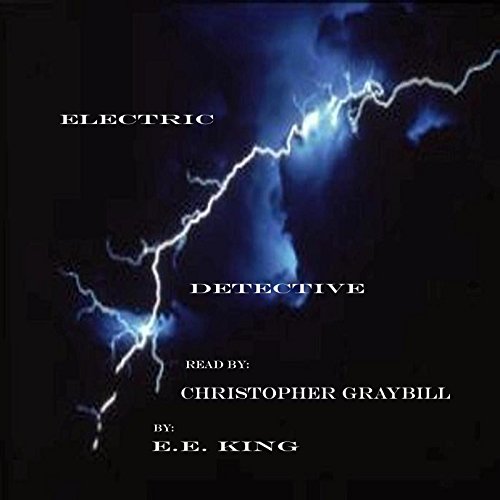 Humphrey Bogart meets The Man in the High Castle.

Eddie Evers was at the top of his game, working for the FBI, tracking missing children and the scum who took them. But after his wife and child are killed in a car crash, he becomes a hard-drinking PI. While in pursuit of a phantom criminal, he is hit by lightning.The bolt super-charges the biophotons in his brain, enabling him to see into other dimensions.

What listeners say about Electric Detective

Too Many Information Dumps

I received this book for free. I am voluntarily posting this review and all opinions expressed herein are my own.

This is a film noir wanna be [think Humphrey Bogart in the Maltese Falcon]. What's interesting about this book is the MC is hit by lightning which creates a superpower of sorts. The MC is an alcoholic and frankly, not all that interesting. On top of that, there were so many information dumps through characters [plus the science part felt like I was in a classroom] that I felt my mind wandering. There is some witty banter, which I enjoyed. I thought I would love this but instead I found myself a little less than interested.

The narrator, Christopher Graybill, was really great. He was absolutely enjoyed his narration.

I was given a free code for this book and asked to leave a review at the end, so I feel kind of bad saying this book was awful, but it was awful. I think the concept is really interesting. But the book that was created from that concept is in my opinion bad. There is no world building. All of the sci-fi weirdness is explained in info dumps, as another reviewer said. You are told how it works by 2 genius scientists instead of the reader slowly piecing it together through the main character, which is what I expected from a book that is sci fi noir. At the same time there isn't any depth to the sci-fi dump explanations. About the main character, if you have read the Dresden files, the main character in this book is basically Harry Dresden but less developed. He's a boring version of Harry Dresden. The narrator unfortunately wasn't very good either, in my opinion. He didn't add anything to make this book better. If this is supposed to be a series I will not be following it.

Interesting twist on a campy 40s detective story with lots of over-the-top dialogue. Fun twist was the effect lighting had on Eddie. Obviously going to be more stories in the series but this ending was too abrupt.

A lot of exposition, but a good ending and plot

I wasn't as big of a fan of this book as I thought I would be.

I love the premise of the story, but there are so many chapters of the main character just having what's happening explained to him, that I had a hard time getting through the book. It didn't help that the main character was a pretty generic alcoholic guy with a ton of regrets who is reluctant to do anything to help anyone else, but is portrayed as a good person anyways.

The end of the book is interesting, and worth the time that I spent reading it, but at the same time it wasn't the best book I've read before, and I found that I had to listen to it on 2.1x to be able to get through the exposition parts.

This was kind of an odd story, but odd in a good way. I loved the characters, and especially the cat. The story captured my attention, and I would love to hear a little more of what happens to Eddie. Eddie is the typical smart-ass alcoholic detective, with an eye for the ladies and a real interesting perspective on the alcohol which he is consuming and which in turn is consuming him.

Christopher Graybill gives a great voice to Eddie, as well as the rest of the cast of characters.

I was given a free copy of this audiobook in exchange for an honest review.

This book was provided free for review, however, the thoughts and opinions are my own.

I thoroughly enjoyed E.E. King's story of Eddie Evers, the "Electric Detective". Narration by Christopher Graybill was spot on and competent. So, a Noir Detective story set in LA with a Quantum Twist. An embittered former police detective who specializes in missing children cases, Eddie Evers has had personal tragedy and PTSD from his past work. Yes the alcoholic Private eye is indeed a fiction trope - but Eddie Evers has unique abilities to perceive the past and the present and to read emotions - a result of being struck by lightning. There is a wealth of wit and metaphor and I found myself starting to like Eddie as the story continues. E. E. King knows how to turn a phrase. I hope to see more of this complex character in the future.


Disclaimer:"I was given this free review copy audiobook at my request and have voluntarily left this review."

As origin stories of super heroes or otherwise 'specially gifted' people, this one is okay. It has a fun original premise, and a nice 'grumpy detective' tone. However it also suffers from a LOT of exposition, so much so it often seems like a wannebe school book of some sorts. Several characters explaining the plot to eachother, and it worsens toward the end, where the 'bad guy' actually takes quite some time to explain everything.

Also, the narrator does not help. I suspect the story would be better if I had simply read it; the narrator reads everything with the same intonation and that does not make for a suspenseful story. I didn't like the strange softer voice he chose for female characters, and that he sometimes mixes up with his male characters.

I have to admit that although I finished the book, I couldn't concentrate through all of it, finding my thoughts wandering to other things.

The author can write though, and has a very promising knack for witty banter.

Perhaps the sequel will be better.

This book was given to me for free at my request and I provided this review voluntarily.

Interesting Take on the Noir Detective

Requested a free code in exchange for an honest review.

The narration is fantastic, perfect for this genre!

A detective is struck by lightning and gains special powers. It is an interesting premise and I enjoyed seeing how the story unfolded. I would like to listen to more books in the series!

If you found this review helpful, please indicate so. Thank You!

I got this as a free book in exchange for a review. I get a bunch from the Reddit audiobooks thread but most are pretty bad and I just don’t bother writing reviews.

I found this book surprisingly fun. It has a lot of Los Angeles atmosphere and it’s very detective noir with great lines every other minute. “Just as useful as a butter knife in a slaughter house”. “She didn’t need ice, she was cool enough without it.” I’m telling you, every other minute, writing is awesome witty.

If you love down on their luck, alcoholic detectives with witty dialogue, this book will be a keeper. There’s also a fantasy element to it. But I think that’s an excuse for the detective to see everything in black and white. If this book has a bad review, it’s because the listener was hoping for a fantasy book and found this instead. But if you are looking for detective noir, it’s more than solid and the narration is perfect.