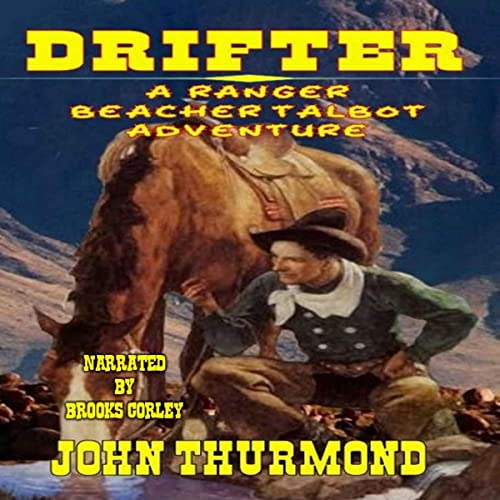 It took Beacher longer than he figured to find the Colorado River. By the time he made camp, the sun was at the west back.

“Just right,” he said to himself. He cut some bank poles, and found some toad frogs. “The smaller ones work better,” Beacher thought. “Now, all I need are some hooks and line, with no weights. Just run your hook under the frog’s backbone, near his hind legs, and he won’t bleed a bit. He’ll swim toward the bank all night.”

Tolbert knew that the forked-tail catfish was a top-feeder, unlike the round-tail, yellow catfish, which fed off the bottom.

What listeners say about Drifter

Have just rediscovered westerns and really liked listening to this book, I love the level of detail in the writing right from the start, for example, the way he described the fed-up-with-his-life Beacher looking at the ceiling which was embedded with nails, it's just so atmospheric I really felt as if I was there, and the story gripped me and I finished it in one sitting.

A nice read, there are a few different stories in this book, each a situation that Beecher finds himself in, it is humorous in places like wen the little girl tries to pinch his catfish. It's fast paced and well written. Brooks Corley does a good job of the narration although I did find I had to slow him down a bit and raise the treble on the audio but that may be my own hearing problem. Recommended listen. *****

Breacher is like the Jack Reacher of the Old West. This book takes us on a short journey with Breacher on a pair of his adventures after taking a sabbatical from his duties as a Texas Ranger. Justice will be done!