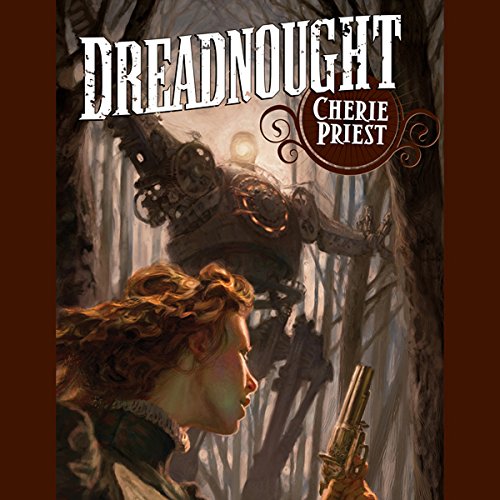 By: Cherie Priest
Narrated by: Kate Reading
Try for £0.00

Nurse Mercy Lynch is elbows deep in bloody laundry at a war hospital in Richmond, Virginia, when Clara Barton comes bearing bad news: Mercy’s husband has died in a POW camp. On top of that, a telegram from the west coast declares that her estranged father is gravely injured, and he wishes to see her. Mercy sets out toward the Mississippi River. Once there, she’ll catch a train over the Rockies and - if the telegram can be believed - be greeted in Washington Territory by the sheriff, who will take her to see her father in Seattle.

Reaching the Mississippi is a harrowing adventure by dirigible and rail through war-torn border states. When Mercy finally arrives in St. Louis, the only Tacoma-bound train is pulled by a terrifying Union-operated steam engine called the Dreadnought. Reluctantly, Mercy buys a ticket and climbs aboard.

What ought to be a quiet trip turns deadly when the train is beset by bushwhackers, then vigorously attacked by a band of Rebel soldiers. The train is moving away from battle lines into the vast, unincorporated West, so Mercy can’t imagine why they’re so interested. Perhaps the mysterious cargo secreted in the second and last train cars has something to do with it?

Mercy is just a frustrated nurse who wants to see her father before he dies. But she’ll have to survive both Union intrigue and Confederate opposition if she wants to make it off the Dreadnought alive.

"The battles and intrigue are entertaining, but the real draw is Priest’s latest no-nonsense heroine, who comes equipped with a full measure of sharp judgment and brutal competence as well as a nurse’s kind (but not saintly) heart." ( Publishers Weekly)

What listeners say about Dreadnought

listened to many times, still enjoying it. in the whole series is great. great steampunk saga.

Cherie Priest at her best.

Cherie Priest at her very best.
Fantastic storyline, that takes you on a roller-coaster of a journey, never quite sure what is happening next.
This is Steampunk!!!

Dreadnought is the third book from the so called Clockwork Century, preceded by Boneshaker and Clementine (novella). One might think that having already been introduced to the brass gears and levers of this war-torn continent some of the mystery and attraction might already have been spent. Not so. The travel story and adventure of Southern girl and Nurse Mercy Lynch is still very much a good and intriguing tale. We already know what a dirigible is, which instead of taking away some of the wonder of the story gives up space for the more human wonder of this desperate journey across a continent ravaged by a never ending civil war. I always feel somewhat dubious about a series where instead of having one continuing story about one or more people it instead picks up somewhere else completely with a new set of main character. Here though I felt that Mercy Lynch more than made up for the lack of Briar Wilkes, she is just as strong and just as determined, but thankfully in a different way.
No, I tell a lie. We do in fact briefly meet Briar Wilkes, which was an added bonus.
Anyway. I did like the book and if you liked Boneshaker I think you will too

War is Hell - 'specially for a Nurse

It’s probably important to state right off the bat that I wasn’t a huge fan of Boneshaker. There are several reasons for this, and it should be noted that I read it, and didn’t listen to it, and that may have contributed to my overall feelings. But I like Cherie Priest’s work – in particular, I loved the Eden Moore Southern Gothic Ghost story “Four and Twenty Black Birds” (and if it was available on Audible, I would snatch up that series in its entirety ASAP).

All that to say I came to Dreadnought with some apprehension. So I was thrilled that Priest (and Reading) defied my expectations, and totally rocked me with this book.

There are two keys in play here. First is our protagonist: Nurse Mercy Lynch. I’m not as well read as I’d like to be, but I can’t think of any other SF/F book whose protagonist is a nurse during a war/battlefield. The book opens in a hospital, and closes in another one. It’s set in an alternate history where the American Civil War has lasted over 15 years. While Mercy makes her way across a country fighting against itself, her expertise will be inevitably called upon while everything’s going to hell around her. She’s never far from the wounded and dying soldiers left in the war’s wake. That’s something we don’t see a lot of in genre fiction, and it gives an incredible weight to the violence and action in the story – from her nurse’s perspective, for every great thrilling scene or set piece, Mercy has to deal with the fallout from it all. If bullets fly, her hands will soon be covered in blood because she’s applying pressure to the wounds. I don’t think I’m being hyperbolic at all when I say that Mercy Lynch may be one of my favorite female protagonists.

From a hospital to traveling through a moving battlefield, the first few hours of listening to this are just incredibly intense – really, some of the most intense I’ve heard in a while. That’s not to say Dreadnought isn’t a fun book – it is. But I was just surprised (and pleased) by how much weight the fun packed. This book does not let you look away from the effects of war and violence, and I appreciate it for that.

The second, and perhaps most obvious key, this being an audiobook, is Kate Reading’s incredible reading. I enjoyed it so much, I’m halfway tempted to go back and give Boneshaker another shot. Reading’s reading of Mercy is just absolutely perfect – absolutely nailing the tough, weary nurse’s voice. Her lack of care for social conventions, in particular her profanity around a bunch of men (and sometimes women) who find her to be unladylike, is delightful. And she does solid work with the male characters, specifically Union Captain MacGruder and Texas Ranger Horatio Kornman. Unquestionably, the supporting characters, and their interactions with Mercy, are part of what makes this book so enjoyable.

Yes, there are zombies in this book as well, and I found them far more terrifying in this book. In Boneshaker, they’re usually there – an army of undead rushing after our heroes. In Dreadnought, Priest goes a different route, showing us the horror they’ve wrought well before we actually encounter them, which creates a rising sense of dread throughout the novel.

All in all, this book stunned me in the best way possible, and I hope Priest can continue delivering books in the Clockwork Century of this caliber. Hopefully, Reading will eventually come back to read more of them.

I enjoyed Boneshaker, and I overall liked this book. Mercy Lynch is a tough, intelligent woman. My favorite type of protagonist in a dark and daring adventure.
But in a book about trying to get from point A to point B on the map, you have to get the time vs. distance somewhere near close. At one point Mercy gets on a boat that can travel at 35 naughts (roughly 40 miles per hour) and needs to go 350 miles. This trip takes her about a week. longer than a cruise across the Atlantic! I don't want to give away too much, but a train that can go up to 95 miles per hour takes an awfully long time to go 2000 miles.
Usually I don't pay much attention to such things and tend to gloss over them when I read, but these were so glaring that they knocked me right out of the narrative. Hence, the three stars.
Otherwise, it was good book and an interesting expansion of the world created in Boneshaker. A world I would like to visit again.

Kate Reading seems to have read this whole book as though she was a spoiled child having a bowel movement. There is no other way to describe her voice, or dear god the voices she gives the characters in this book. I would give her reading 0 stars if I could and will avoid her like the plague in the future.

The book by it's self would have gotten 3.5 stars. It's enjoyable, and the world is fun to explore. It's a good follow up to The Boneshaker. But there are times when characters are bit inconsistent, or seem to do things for no other reason then that Priest wants to show us something.

So don't read this book with a critical eye, have fun with it, let the world wash over you and for the love of all that is holy don't let Kate Reading read it to you!

Adventure about a nurse being a nurse...

When I read a story or watch a movie, I expect the main character, no matter how much of an expert they are in their field or career, to be thrown into something that's out of their element. This is true whether it's a science fiction adventure or a romantic comedy.

I got about 3/4 of the way through this audio book before finally giving up. Kate Reading's performance was perfectly fine, but it couldn't help the fundamental failure in storytelling.

A lot of buildup

Seemed like it was drawn out could have been just as detailed with half the pages but still enjoyable none the less.

I am new to the genre so I asked for recommendations a year or so ago. Cherie Priest's series was recommended and I have not been disappointed. She cleverly weaves in details from the previous story without it becoming overbearing. The premise she has created is fun and frightening at the same time. You can't go wrong. This listener recommends going in order... buts that's me... the stories stand on their own...

I just wished the pace was a bit quicker in places. She's a nurse, we get it. Performing first aid every three chapters is a bit much.

I hate when a book ends on a cliff hanger! While enjoyable, this was half a book. I probably will hunt down the next one, but feel incomplete