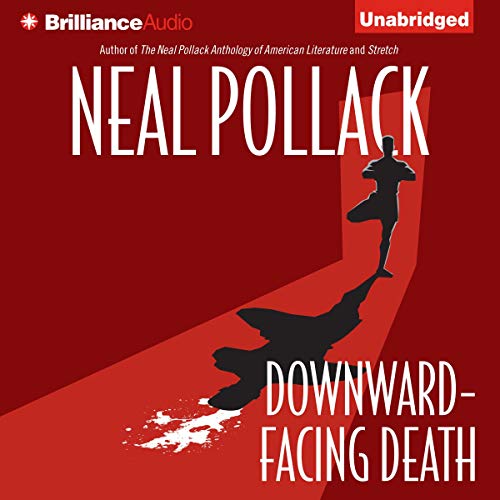 By: Neal Pollack
Narrated by: Fred Stella
Try for £0.00

Downward facing death... Blessed with uncanny deductive skills and a blasé disregard for authority, Matt Bolster was a rising LAPD homicide detective by the age of 35. He was also overworked, near-alcoholic, and miserable. Then, to impress a girl, he agreed to try yoga. And with a single savasana, everything changed. Now Bolster has traded his badge for a three-day stubble and the life of an itinerant yoga teacher, dabbling in PI work to make rent. He mostly handles missing-persons cases, credit-card fraud - nothing too messy. But that's before Ajoy Chaterjee, the wealthy mogul behind one of the world's leading yoga-business empires, is found murdered inside his West L.A. flagship studio. Bolster knows the LAPD doesn't have a prayer of cracking the secrets of the yoga world. But he does, and he really needs the dough. Of course, sticking to the principles of the yamas and niyamas during a murder investigation isn't easy, especially with so many alluring women among the suspects. But personal ethics will be the least of Bolster's problems if the killer finds him first.

What listeners say about Downward-Facing Death

Yoga, nihilism & the essence of the universe!

Writing a 'murder mystery', taking in the 'real' sights of Hollywood, plumbing some of the depths of the oldest extant perfected method of self discipline & personal enhancement, observing the vagaries of human nature - Neal Pollack manages to do all this & more. A most entertaining & illuminating narrative (narration was good but not excellent) & am looking forward to the next installment.

Love Yoga and Satire - This is for you

Where does Downward-Facing Death rank among all the audiobooks you’ve listened to so far?

In the yoga satire mystery genre this one is tops.

Which character – as performed by Fred Stella – was your favorite?

Narrator was great. Loved them all.

If you love yoga and humor Neal Pollack nailed both. The insider jokes were right on. To write satire like this you have to love what you're making fun of, and I have no doubt Pollack does. Though now not too many teachers or students would want to be in class with him. ;)

Decent listen, but not a wow book

I really enjoy a good who dunnit story, and this one is just about average or just above average. I decided to read this book because I love yoga and wanted to read a book that integrated two things I am interested in - yoga and murder mystery. I thought the plot was ok. The writing was a bit cheeky and sophomoric for my taste. The plot line also wasn't very deep and was rather flat throughout. Some of the character development could have been a bit better, but for a novel of this length, it was ok. The performance of the book was better than the story itself.

Proof that any body can get a book published.

What disappointed you about Downward-Facing Death?

Where to begin, this book is so poorly written couldn't get past the second chapter.

What could Neal Pollack have done to make this a more enjoyable book for you?

Not written it in the first place.

He sounded like he appreciated the book as much as I did.