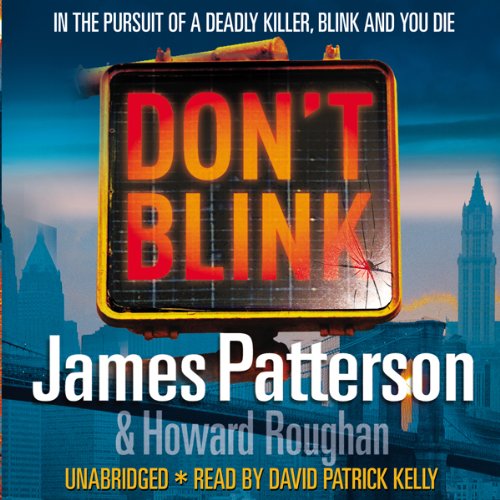 By: James Patterson
Narrated by: David Patrick Kelly
Try for £0.00

New York’s Lombardo’s Steak House is famous for three reasons – the menu, the clientele, and now the gruesome murder of an infamous mob lawyer. Effortlessly, the assassin slips through the police’s fingers, and his absence sparks a blaze of accusations about who ordered the hit.

Seated at a nearby table, reporter Nick Daniels is conducting a once-in-a-lifetime interview with a legendary baseball bad-boy. Shocked and shaken, he doesn’t realise that he’s accidentally captured a key piece of evidence. Ensnared in the city’s most sensational crime in years, Nick investigates for a story of his own. Back off – or die – is the clear message as he closes in on the facts. Heedless, and perhaps in love, Nick endures humiliation, threats, violence, and worse in a thriller that overturns every expectation and finishes with the kind of flourish only James Patterson knows.

What listeners say about Don't Blink

I love James Patterson books, read almost every one, but this one failed to keep my attention at all. I didn't really like the narrator's voice, which I accept is a personal thing, but I also felt that the plot was all over the place. I play these in the car on long journeys and was keen to finish it, to move onto my next book in the library.

Well written story that keeps you on your toes to the end - however ..... the use of random music that drowns out the narrator at various points in the story is an unnecessary distraction to an otherwise gripping tale. Even though I had guessed the 'bad guy' fairly early on in the story, the twists and turns made me change my mind a couple of times - just what I expect from a good novel and it certainly didn't disappoint. It's just a pity about the music!

it's the first James Patterson I've listened to and it will certainly be the last.

This is a great listen which went all too fast for me. The story is fast paced, interesting and believable. The characters are well developed and complex, particularly the hero. I can imagine Patterson using this as a base to launch a new series and I for one will be waiting eagerly for the next offering.

James Patterson is just my favorite! another book that you can't put away until you're done, even though I don't like Mafia stories. The voice of the narrator is very pleasant.