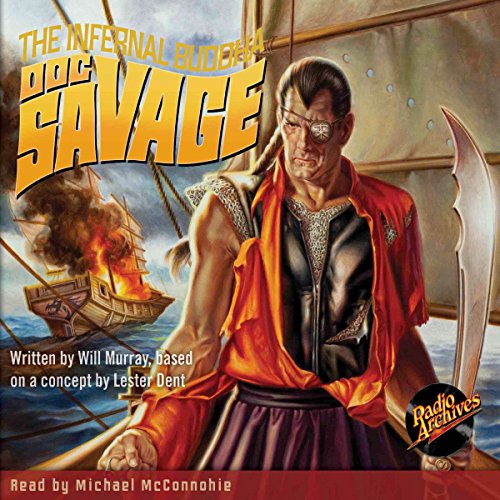 When a mummy arrives at Doc Savage's New York headquarters wearing the clothes of his missing assistant, engineer Renny Renwick, Doc, Monk, and Ham rush to Singapore where they get on the trail of a swashbuckling pirate who calls himself the Scourge of the South China Sea, in whose hands a piece of the infernal Buddha has fallen. The trail leads to Pirate Island, the fate of Renny, and a mysterious box containing a terrible, unstoppable power. But that is only the beginning of the quest into which the Man of Bronze plunges - one that will take him to the upper reaches of the Yellow Sea and a series a wild ocean battles against the vicious factions fighting for control on the infernal Buddha. Before it is all over, every human life on Earth will tremble on the brink of eternity, and Doc Savage will face his greatest test.

What listeners say about Doc Savage: The Infernal Buddha

One of Doc Savages finest adventures. Well worth listening too. Looking forward to the next