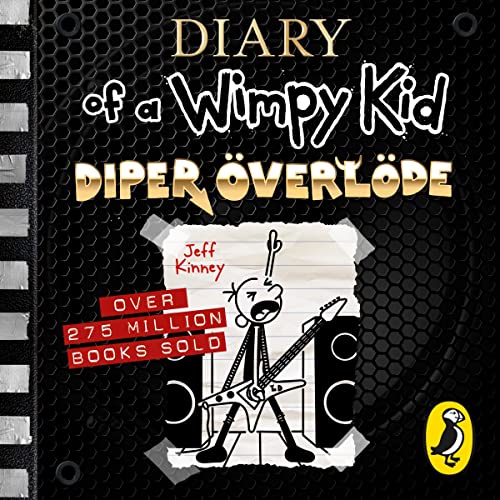 By: Jeff Kinney
Narrated by: Dan Russell
Try for £0.00

In Diper Överlöde, book 17 of the Diary of a Wimpy Kid series from #1 international bestselling author Jeff Kinney, Greg Heffley is finding out that the road to fame and glory comes with some hard knocks.

When he decides to tag along with his brother Rodrick's band, Löded Diper, Greg doesn't realize what he's getting into. But he soon learns that late nights, unpaid gigs, fighting between band members, and money troubles are all part of the rock 'n' roll lifestyle.

Can Greg help Löded Diper become the legends they think they are? Or will too much time with Rodrick's band be a diper överlöde?

What listeners say about Diary of a Wimpy Kid: Diper Överlöde

A really funny and exelent book.
I really liked it.
it's a good book.

As usual, this book is fantastic. This novel, as Jeff Kinney has written the book, contains all the qualities you might anticipate with a twist.

STOP TALKING Ts. PS THIS IS SAID ON 30 SREPTEMBER 2022.AND U HAVENT READ THE BOOK YET CUZ IT HAVENT COME AND STUFF UK

It was pretty good. It was just too much Rodrick stuff for me. I thought it was okay.

It was good but why would they help out Roddrick? Dan did good at explaining what the picture was