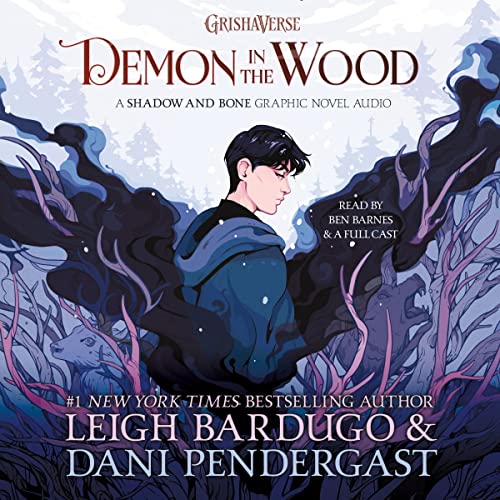 Demon in the Wood

“This is no ordinary audiobook, but rather a graphic novel for the ears. Readers will be delighted by the auditory magic of this book.” —Booklist

"A full cast of talented narrators taps into the darkly magical atmosphere of Bardugo's graphic novel prequel to the Shadow and Bone trilogy. Primary narrator Ben Barnes depicts the villainous Darkling when he was known as Eryk, a young teen who hungered for companionship and stability. An evocative soundscape, incorporating everything from the clip-clopping of horses' hooves to the sounds of the night, further enhances this spellbinding audio." - AudioFile Magazine (Earphones Award Winner)

Discover the start of a grand and sinister destiny in Demon in the Wood, the must-have graphic novel audiobook prequel to the bestselling series and international Netflix sensation Shadow and Bone from spectacular new talent Dani Pendergast and #1 New York Times bestselling author Leigh Bardugo.

Before he led Ravka’s Second Army, before he created the Fold, and long before he became the Darkling, he was just a lonely boy burdened by an extraordinary power.

Eryk and his mother, Lena, have spent their lives on the run. But they will never find a safe haven. They are not only Grisha—they are the deadliest and rarest of their kind. Feared by those who wish to destroy them and hunted by those who would exploit their gifts, they must hide their true abilities wherever they go. But sometimes deadly secrets have a way of revealing themselves.

What listeners say about Demon in the Wood

Surprising, but still the darkling is morally grey

the best way to sum it up is short and sweet. I have only read shadow and bone and do plan to finish the series as the tv show releases.

the voice acting was perfect, very similar to the sandman audiobook in regards to its quality. Ben Barnes was a nice touch as a sort of narrator in a sense, if I got the voices right. I love the voice actor who played baghra, it was very distinctive and very much in her character.

the story itself was great, with a surprising ending that is both bitter sweet, but still definitely unexpected. very good quick listening experience.

I would recommend it to anyone who is a fan of the darkling, Ben Barnes and grishaverse as a whole.

This should have been MUCH LONGER than this❤️
I loved it!!!
I wanna know more about him!😭😭😭
This is amazing!
The graphic audio is perfect too

I just wish it was longer

I love a full cast audio! Especially with sound effects. Ben Barnes narrating the back story of his character from the series was the icing on the cake. I wish the others in the series were like this.

I loved the narration and the music and sound effects really made it unimaginable to put down.
I've read the graphic novel, however it's good to listen to even if you haven't read it.

Each character is easy to understand and identify due to the voices.
Best audio book this year! I can't wait for the next one.

I only came for Ben Barnes and was not disappointed. 10/10 would recommend. The narration is a plus from the graphic novel, which only shows the dialogue bubbles. It's not the narration from the original novel either, though there are a couple of passages taken directly from there. What I'm trying to say is that this audiobook contains bonus stuff from the actual book, narrated by none other than Ben Barnes himself. To quote Leigh Bardugo from the physical graphic novel: "To the cast and crew of Shadow and Bone, especially Ben, who is one of the good guys."

It’s not worth the credit

Can't believe I used a whole Audible credit for an hour and a half!! I feel duped.

I got it purely for Ben Barnes. The darkling is one of the great grey villains in the grisha trilogy and I liked the backstory. The audio production was a fun listen with a lot of sound effects, lots of different narrators and of course we got the real Darkling, Ben Barnes, narrating the story.
Overall, not worth a full credit as it's super short, but a nice addition to your library!

I hope they write more

It was too short but it was a great story, it gave us another reason why he was made into a villain.I love the series and this has been an amazing addition, I hope they make more :)

This was a very creative little drama that I throughly enjoyed (though I wish it was longer). I’m not sure it would be worth the price but I do think it’s worth a credit if you have a membership. Ben Barns kills it!

A small glimpse into the darkling's history

I always love new content for the Grishaverse! The story was well told and gave a small glimpse into the darkling's history. I really wish it was longer to provide time for more character development and adventure.

Loved this back story on my favorite character from the amazing world that Leigh Bardugo created.

Love that they used Multiple narrators. This a great audiobook of this novel.

Read/Listen to Before Reading Shadow and Bone

A brief but nice glimpse into the past of Eric, also known as either The Black Heretic or Aleksander Morozova, the General in Shadow and Bone. I wish it delved a bit deeper, but no negative anything from me! 😄👍🏽

Absolutely love Ben Barnes. This was well done! I would read anything she put out!

Interesting, but expensive for only 1 hour

The thematic audio leaves one unimpressed. I can joy a good audio drama, and this was subpar in my opinion. I enjoyed Ben Barnes as the narrator though. The story is quite short, and gives a small glimpse into the past of the Darkling. The transition from scene to scene was often abrupt and obvious, making the flow a little jarring at times. Probably better as a graphic novel…