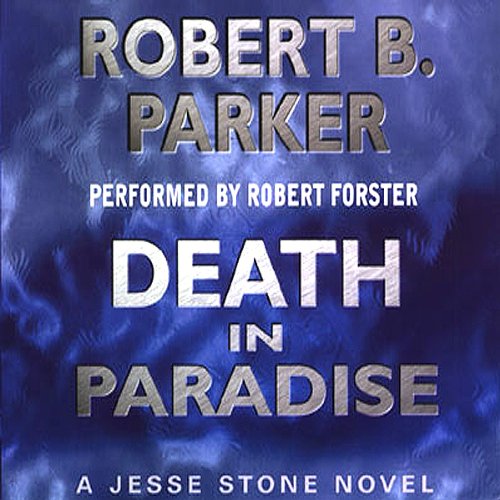 By: Robert B. Parker
Narrated by: Robert Forster
Try for £0.00

Chief of Police Jesse Stone returns to investigate the murder of a troubled teenager in a seemingly bucolic New England town.

The Paradise Men's Softball League has wrapped up another game, and Jesse Stone is lingering in the parking lot with his teammates, drinking beer, swapping stories of double plays and beautiful women in the late-summer twilight. But then a frightened voice calls out to him from the edge of a nearby lake. There, two men squat at the water's edge. In front of them, facedown, was something that used to be a girl.

The local cops haven't seen anything like this, but Jesse's L.A. past has made him all too familiar with floaters. This girl hadn't committed suicide; she hadn't been drowned; she'd been shot and dumped, discarded like trash. Before long it becomes clear that she had a taste for the wild life; and her own parents can't be bothered to report her missing, or even admit that she once was a child of theirs. All Jesse has to go on is a young man's school ring on a gold chain, and a hunch or two.

"A page-turner...one of the master's best." ( The Washington Post Book World)
"Prose whose impeccability speaks of decades of careful writing." ( Publishers Weekly)

What listeners say about Death in Paradise

The story is ok, though it's the usual Jesses sleeps with any woman with a pulse. The worst thing about it is the narration.

Robert Forster reads this with such contempt and monotone that it really ruins the story.

Do yourself a favour, read the book instead. Waste of a credit. Not Audibles fault, just Forster is as appalling a narrator as David Dukes.

Heard just about all the Spenser books so decided to give a listen to Parker's new hero - Jessie Stone. Turned out to be a great choice. Stone has all of Spenser's knowhow but is a lot more flawed - and more human. Very easy to identify with. The mystery was also excellent and had me guessing to the end.

Love Robert B. Parker, love his books, and especially love his Jesse Stone character who is a good solid man's man, tells it like it is. This is a good "read", light on the mystery but the reason for my two star rating is the constant, annoying "Jesse said" and "she said" which got under my skin. Driving 150 miles somewhere this week? This is the right book, nothing too complicated, few characters to keep up with, and the ending is rather predictable.

I'm sorry I bought this audio book. I got so tired of all the "he said" and the monotone boring narrator who gave the same voice to all characters that the story just didn't work for me.

Good mystery, too much empty angst

Jesse Stone, police chief of Paradise, Mass., is an appealing character -- think Spenser without the ever-annoying Susan and Hawk -- and his crimesolving is compelling. But enough of Jesse's endless discussions with his on-again, off-again ex-wife and his overblown "to drink or not to drink" soliloquies. You get the point after the first round, and could easily fast forward through all the rest without missing anything vital. Reader has the right style but mispronounces several words -- where is Joe Mantegna when we need him?

Writing not good for audio.

I found the writing style uninspiring and formulaic. He'd throw in descriptions of clothing in pointless interruption of dialog. Our hero jumps into the sack with anybody, all the women are beautiful...
What I found irritating in the audio that wouldn't matter as much on paper was the dialog. Somehow the rhythm of "He said...She said...He said...She said" really stood out as repetitious in a way that hasn't bothered me in the hundreds of other audio books I've listened to.

What disappointed you about Death in Paradise?

The narration is flat. I was distracted by the constant

Its one of those endings like turning another page. This is simply one chapter in a longer volume.

The story explores a flawed man doing a good job as a cop, but the narration makes it seems so mundane.

What disappointed you about Death in Paradise?

Th narrator had a decent style in Hit Man by Lawrence Block. I thought I'd give him another go. I seldom offer reviews, but I do not want others to waste your earned money on this horrible narration. Please just listen to the sample and I absolutely insist that you do NOT support this horrible performance.

Would you be willing to try another book from Robert B. Parker? Why or why not?

Who would you have cast as narrator instead of Robert Forster?

Alan Sklar or Tony Roberts, but without the he said...and she said...

If you could play editor, what scene or scenes would you have cut from Death in Paradise?

I decided to buy this because I have enjoyed reading a couple of Robert Parker's books, and I really enjoyed the Jesse Stone TV movies. And while the story was certainly ok, and the dialogue had the same dryly sarcastic wit I enjoyed in the movies, I found the narrator's singsong cadence, pacing and overall performance annoying and distracting. My pet peeve is that he would go directly from one scene to another without a pause or breath, so the listener (me) got lost a lot. I managed to make it to the end of the book, but I won't be buying any more books narrated by Robert Forster...

Story, narration...all good ! highly recommend.... I started out reading the Spenser series years ago - but quickly came to like Jesse Stone, even better. This is my favorite in the series...

Not the Best Jesse Stone

but still pretty good. I generally like most of the Jesse Stone mystery series novels and though this one would've been better with James Naughton as the narrator it was pretty good. It had all the normal shortcomings of of RBP novels; aka all the he said, she said, Jesse saids at the end of sentences. Plus all of Jesse's soliloquies pertaining to his drinking and the constant back and forth of Jesse and his ex-wife Jen that are the bane of the series. Oh, and one more thing, Harry 'Suitcase' Simpson was an outfielder with four American League teams; none of them the Red Sox, in the 1950's. Since none of the book's characters were supposed to have been alive in the 1950's it's unlikely that Luther Simpson would been given that nickname. It's much far likely that he would have been christened with O J or the Juice; although post double murder perhaps not. The situation with the mob boss strains credulity somewhat but that's a minor point. Jesse's way of responding straight forwardly to life and the law is inspiring; his combination of machismo and sensitivity an example to us all; well worth the credit.