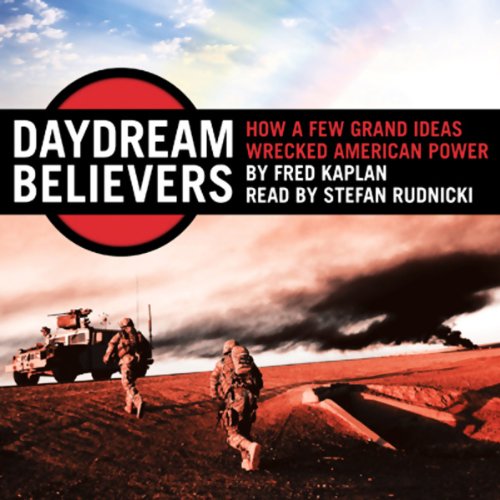 By: Fred Kaplan
Narrated by: Stefan Rudnicki
Try for £0.00

America's power is in decline, its foreign policy adrift, its allies alienated, its soldiers trapped in a war that even generals regard as unwinnable. What has happened these past eight years is well known. Why it happened continues to puzzle. Daydream Believers combines in-depth reporting and analysis to explain how George W. Bush and his aides got so far off track - and why much of the nation followed.

For eight years, the White House and many of the nation's opinion pages rang out with appealing but deluded claims: that we live in a time like no other, that new technology transformed warfare, that the world's peoples will be set free if only America topples their dictators, and that those who dispute such promises do so for partisan reasons. They thought they were visionaries, but they only had visions. And they believed these daydreams.

With stunning anecdotes, hidden history, and sharp insight, Kaplan reveals a truth whose understanding is crucial to finding leaders who can see the world as it really is.

What listeners say about Daydream Believers

Perhaps I have just read or listened to too many books about the Iraq War, but too much of the information in this selection is repetitive to me. The reader is well known and has evidently narrated a great many audiobooks but I found that his voice atonal and so deep I wondered if he'd had a cold during this performance.
If you haven't been inundated by the stories of the Bush/Cheney/Rumsfeld subterfuge in the run up to the war in Iraq and it's failures during the war this work will be beneficial. If you've read or listened to more than two or three audio's on the subject you might want to use your credit differently.

A must read if you want to know why Iraq Invasion

I lived through this and wondered why, now I know. Some things are too complicated to simplify this is one example.

Of the historical disaster our foreign policy has been for a long time, culminating in Iraq's invasion and leading to the quagmire we seem unable to extricate ourselves from. It does not touch upon those who have become gloriously wealthy in this filthy mess except tangentially. Nonetheless books of this kind always serve as a good way to stitch the facts together.

Reads like the compilation of study notes gathered over the years. The premise revolves around how the world (didn't) change after 9-11, though the author delves into the history of ballistic missile defense and technology evolution during the cold war. Many interesting, yet unlinked ideas. Much finger pointing and passive-aggressive arguing. Still a good read for any generalist looking to expand their portfolio on perspectives.

Non fiction. We all know how it ends.