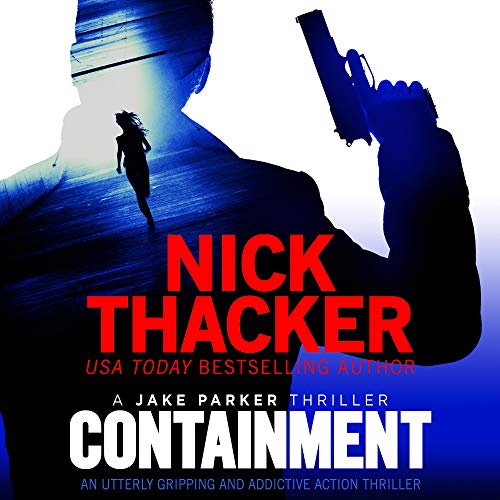 By: Nick Thacker
Narrated by: Craig Van Ness
Try for £0.00

When there’s nothing left to lose, there’s no limit to what you’ll risk.

Jake Parker’s world collapsed with the violent death of his wife during a police-led raid. In the awful aftermath, he hung up his detective’s badge for good. Now ex-military, ex-police, he has embraced a simple civilian life. But when a deadly new disease begins to threaten American lives, Jake is dragged out of his self-imposed retirement.

When a young family at a remote detention center die from a mysterious illness, Jake is contacted by a government official to launch a covert investigation. An unknown disease has entered the system, causing agonizing death and visible signs of blood pooling beneath the skin, and it seems to be spreading. If Jake can’t get on the ground quickly to eliminate the threat before it becomes an epidemic, countless more innocent lives could be at risk.

With the help of medical Professor Eliza Mendoza, Jake heads to the border, but what they uncover there is evidence that this devastating disease is man-made and part of a calculated plot aimed right at the heart of government. With powerful forces ranged against him, Jake must use all his ingenuity to bring down the ruthless organization behind the attack. Failure is not an option.

A pulse-pounding action thriller from a USA Today best-selling author. Fans of David Baldacci, I Am Pilgrim, and Jack Ryan will be gripped.

What listeners say about Containment

Without illigal(!!!!) immigration, no way

Sorry, but I m very egged on. I am a naturalized American, in went through the hoops. I am empathic to immigrants, but not to ILEGAL ones. So, this outpouring pity in this story disgusts me.
The medical part is interesting and would have spellbound me in a different background.
The narrator is the only one which kept me interested. I’m planning to return this book. It stands against me and my experience with DHS, when this country was United, proud, free; when this country was just!
Due to my own story I’m about to puke, disgusted by the underlying racism in the second part of this…….

I went into this as a fan Thacker’s – I’ve read other books from his other series. I also went into it excited since it has the bio-hazard sign and it’s toted as “…about a deadly pandemic”. So, I bought this one without question.

Getting into it (and sorry for the slight spoiler ahead) – it was very much about the “pre” stages of a pandemic. It was more of a thriller where the main character is out to stop the pandemic from being released (instead of trying to stop it once it’s out in the wild). Now that that’s out of the way, I still did enjoy this book.

Thacker has a way of creating characters that jump off of the page and are almost instantly likeable. Jake Parker was no different. He was a “play it by the book” kind of guy – but once he’s teamed up with Eliza Mendoza things start to get even more interesting. Eliza’s character was really interesting because we weren’t given much information about her (neither was Jake) so it felt like she was a complete wild card.

Overall, Thacker did it again – he wrote a high-intensity thriller and made it believable. He took topics that are still going on today and wrote about them as if they happened in the past (not easy to do, especially with COVID-19.