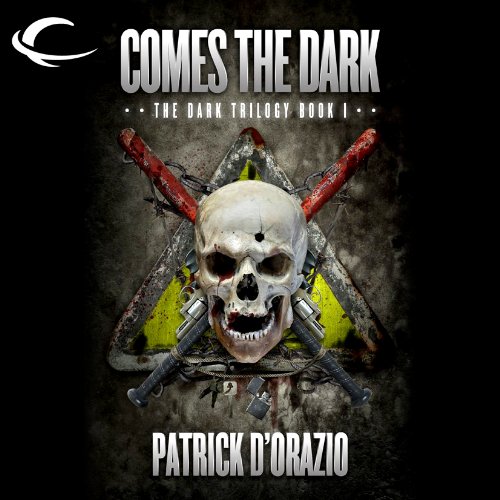 What is there to live for when you have seen the gruesome details of all you love destroyed? That question sets the first of Patrick D’Orazio’s "Dark Trilogy" in motion as former "soccer dad" Jeff Blaine discovers his will to carry on in the darkness of taking revenge on the monsters who bit his wife and children to death. Jim Cooper provides the rough-edged performance as Blaine discovers other survivors, who, together, band and travel an apocalyptic, bleak, and frightening landscape in pursuit of tiny shreds of hope.

First time novelist, Patrick D'Orazio, takes us on a journey that follows the path of the everyman, Jeff Blaine, in the days after the end of the world. Six weeks have passed since the virus ravaged the world's population and in that time most of humanity has passed into shadow, turning into corrupt, rotting flesh eaters that known only pain and hunger as they attempt to destroy the remaining members of the human race. Jeff has lost everything, including much of his desire to continue surviving in this hell on earth. The idea of lashing out at the monsters who took his life away is the only remaining pleasure left, so Jeff decides to leave his house and destroy as many of the creatures as he can before he is annihilated by them. It doesn't take long for Jeff to discover that he is not alone. Other survivors like Megan, George, and Jason that he finds along his path of self-destruction force him to rethink his plan. They aren't willing to give up just yet-they not only want to survive, they want to live. So as the darkness threatens to consume him, Jeff has to decide if he is willing to keep fighting for himself and the others, or let the bitterness wrapped around his soul destroy him.

What listeners say about Comes the Dark

Really enjoyed this book. Non stop action! Characters are well developed, dialog is good, narrator is good, and story is Zombified! Must read for all Zombie lovers.

The main character sets out to vent his grief on Zombies for the death of his family only to meet a one of his neighbors who has also survived. She is petrified of the walking dead and wants to escape far away from the hordes of living dead.

This book will keep you on the edge of your seat. You will not want to stop listening!!!

my neighbors are zombies! can i? do i kill 'em?


as jeff makes it back home from a night time trip scouting for food, he notices his door is unlocked. when he opens it, he discovers his worst nightmare- his neighbor eating his wife, but that's not his worst discovery.

the author does a good job portraying jeff's reaction and subsequent range of emotions. he also does a good job with the dialogue b/ween the characters- nothing is forced and it's believable.

this is an action packed zombie story. the action starts the 1st minute of the story. jeff is an everyday man. he's not a survivalist with a bunker full of guns so he has to use his brain to outwit the zombies. jeff does have a gun, but you get the feeling it'll only be used in a special occasion.

as jeff tries to escape his neighborhood, he comes across another survivor, megan. she wants to get as far away as possible. in their search for a safe area to spend the night, they come across george and jeff, who have an interesting related backstory.

the author does a good job describing the power and fear of a hoard of zombies.

the narration is pretty good. the narrator does a good job narrating the different characters and voicing their emotions.

overall, an enjoyable listen, and a good addition to any zombie fan's bookshelf.

the story is short enough and exciting enough to listen to in one sitting. of course as a trilogy, the story ends in a cliffhanger. i've listened to the 2nd book, and my biggest complaint is that it's going to cost me 3 credits for a story that should probably be one book. i can understand that the author is a 1st time author and may want to make as much $ as possible to keep writing, but i think he may turn some readers and/or listeners off by splitting the story into 3 books. some people hate cliffhangers so they won't pick up book 2. book 2 also has a cliffhanger and is mostly about group dynamics, which is another reason why some readers may give up on the story there. if the author combined all 3 short books into one longer book, he'd probably have more people reading his entire story instead of losing some along the way.

The story doesn't try to come up with any new angle or "twist", rather focusing on the simple issue of your average man, Jeff, trying to survive the apocalypse. He meets up with Megan and the dynamic between them is entertaining to read as it swings from affection to maniacal anger because of the insane situation they find themselves in.

Jeff is clever and I am not left thinking something is unrealistic, stupid or lame. Well, ok, maybe they shouldn't have split up those couple of times, but maybe these things are just mandatory in zombie books.

The pace may seem rather plodding as I think it takes place only over 3 days, but there is plenty happening during that time. You're even left wondering if the story will ever progress as they can't even seem to get outside of their neighbourhood.

There isn't much of a plot and few characters. They just try different things, drive one way or the other and that's the story. This is just fine because the content is just great.

Narration was good, although the gruffness in Jeffs voice seemed to change sometimes.

Never read a book with a bigger cliff hangar than this one. So yeah, this story is expensive being so short but I'm a downloading the other two books now so I figure its worth it.

This book is a complete dud

What would have made Comes the Dark better?

I love zombie books. Hell, if there's anything about a story that has the living dead in it, i'm normally hooked. But the writing on this book is just bad. The characters are no where near believable and the story is chocked full of grammar errors. Ok, call me a grammar nazi....I don't care, but if you're going to go through all the trouble to write a book, at least take some time and create a coherent sentence. It's a huge pet peeve of mine.

But back to the characters. So a man loses his wife and family to zombies in the first few pages and he's A-OK and fine about 30 minutes later. Bullcrap, I'd be curled up in a corner hoping the zombies pulled me apart. Bad characters & bad writing.

The only saving grace to this story is the narrator Jim Cooper. His voice is great for this kind of story. I'll have to see what other stories he reads. He really knows how to set the mood in a horror story. Too bad he had very little to work with here.


What could Patrick D' Orazio have done to make this a more enjoyable book for you?

Better character development, buy Hooked on Phonics (he'll need it if he wants to be a decent writer).

I liked his performance

disappointment, I wish I had bought another book instead.

Just bad. The performance wasn't very good. The story was mediocre at best. I did not like it at all.

Has Comes the Dark turned you off from other books in this genre?

What disappointed you about Comes the Dark?

It has no story line, There is a beginning but no middle & no end. I kept listening, waiting for the story to start, but it just ended. I actually went back and played the end again, because it was so abrupt, I thought something had went wrong with my copy. It ended like some someone put a line after a paragraph and said that's the end, we'll put the rest in the next book. Presumably, that's where the story is too.There is no depth to these characters. I know there's not a lot to work with for the performer, but it could have been done better. The voices and accents were just irritating.

Would you be willing to try another one of Jim Cooper’s performances?

Don't waste your time and money buying this. I'll be returning my copy.

This book starts fast and never slows down! Blood and guts on top of blood and guts! A good start to this trilogy! I also liked the narrator!